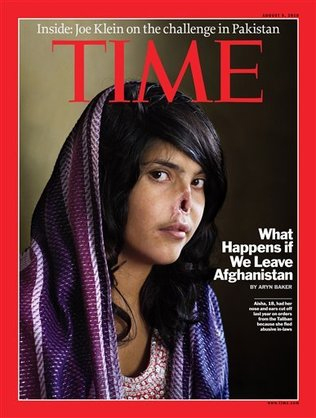 Afghan women could serve as ideal messengers in humanizing the ISAF [International Security Assistance Force] role in combating the Taliban because of women?s ability to speak personally and credibly about their experiences under the Taliban, their aspirations for the future, and their fears of a Taliban victory. Outreach initiatives that create media opportunities for Afghan women to share their stories with French, German, and other European women could help to overcome pervasive scepticism among women in Western Europe toward the ISAF mission.

But women in Afghanistan suffer abuse at the hands of Talibs and non-Talibs alike. It?s a social problem, not a Taliban problem. Of course, ousting the Taliban did women a favour in many regards. They regained suffrage, for one. Yes, today women nearly fill the 25% quota for parliamentary seats, and education is no longer officially forbidden. But how many women really benefit from the new constitution? What is written on paper is rarely applied in practice for the vast majority of women, particularly those living in rural areas, which represent about 77% of the population.
According to a?recent survey by the UN Development Fund for Women (UNIFEM), ?more than 87 percent of all women suffer from domestic abuse, making the country one of the most dangerous places in the world to be a woman.? That is today. Are we to believe that 100% of women were being abused under the Taliban, or will be if they return to power? Is that meagre 13% of violence-free women really the result of the ISAF mission?
In 2007 I did a?story on Afghan women who self-immolate. They are so desperate that, one day, something compels them to douse themselves with petrol and strike a match. I listened to their stories with unease. They were beaten, raped, used as prostitutes, molested and enslaved; all by husbands, fathers, cousins, uncles, brothers, or in-laws. Not one of them was from Taliban territory. Though it?s impossible to get a real sense of the numbers, most agree that the phenomenon is on the rise, and yet, we are meant to believe that the war effort is making progress on the front of women?s rights.
Oppression and brutality against women are not endemic to the Taliban alone in Afghanistan. Last year, President Karzai, in a bid to gain votes from the country?s Shia minority (roughly 19%) passed a controversial new law curtailing women?s rights. The Shiite Personal Status Law (SPSL), allows a man to deny his wife food if she does not submit to his sexual will, gives custody of children to fathers and grandfathers, and requires a woman to get permission from her family to work or to travel outside the home without a male escort. ?It also, in effect, enables a rapist to avoid prosecution by paying ?blood money?,? says Human Rights Watch.
It?s worth noting that the Taliban are Sunni, not Shia, and that the US-backed president has enacted a law for the non-Taliban sector of society, rolling back rights for women that were written into the constitution. Before the elections, the?Times Online reported that ?the United States and Britain [were] opposed to any strong public protest [against the law] because they fear[ed] that speaking out could disrupt [the] election.?? The bill was pushed through parliament in February of 2009 and came into effect in July of last year. Afghan women fumed, while US and UK leaders stood by, and where was Time?s cover advocating for women?s rights then? Here are the covers they ran in February 2009.

Central to the debate about the message the Time cover sends, is the question are we really making progress for women ? and if so, why should we believe that a good reason to continue fighting? While many people were moved by the cover, some things just don?t add up. After nine years of war, the public has grown wary of these kinds of media stunts. We are not so dumb anymore. The Bush years are over. Challenging our leaders is no longer tantamount to a capital offence. Not ?supporting the troops? is no longer suggestive of treason, since so many of them are returning home to join the growing anti-war movement. Support for the war has plunged to an all-time low (36%). Too many US soldiers have committed suicide or come home suffering from Post Traumatic Stress Disorder (PTSD). People are starting to feel uncomfortable about the number of Afghan civilian casualties, which sadly should have been an issue long ago, but what the Wikileaks documents show us is that the army has been cooking the numbers. All those deaths of ?enemy combatants? were in reality far too often civilians. Such facts Americans are not happy to learn. The truth is coming out, though the editors of Time, like the Pentagon, obviously want to deflect our attention from it by shoving our faces in another gruesome reality that somehow makes even the staunchest pacifist wonder if maybe we?should soldier on.
In my discussions with friends about the cover, I was amazed how many educated, sharp women couldn?t see how they were being manipulated. Many felt it was much more important to shed light on the plight of women, and missed the absurdity of the message attached to it. Some of them were Iranian expats, for whom the subject of women?s rights is all too close to home. But then I asked, what if Time magazine were to run a cover like this one? 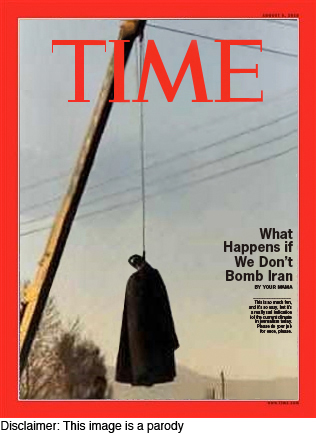 4 thoughts on “The Face That Launched a Thousand Drones?”