John Tulloch is a British university lecturer who is best known as a survivor of the July 7, 2005 London Bombings. END_OF_DOCUMENT_TOKEN_TO_BE_REPLACED The recent 70th anniversary of the liberation of Auschwitz was a reminder of the great crime of fascism, whose Nazi iconography is embedded in our consciousness. Fascism is preserved as history, as flickering footage of goose-stepping blackshirts, their criminality terrible and clear. Yet in the same liberal societies, whose war-making elites urge us never to forget, the accelerating danger of a modern kind of fascism is suppressed; for it is their fascism. END_OF_DOCUMENT_TOKEN_TO_BE_REPLACED


It was a few yards away from where Dr. Milon had been killed. Then it had been?suspected the police were involved. This time, the police were a silent witness. Blogger and human rights activist Dr. Avijit Roy and his wife?Rafida Ahmed Banna?were returning home after visiting the Amar Ekushey Book Fair. Their ricksha was stopped, they were dragged out and Avijit was hacked to death. Banya?was severely injured and lost a finger.? END_OF_DOCUMENT_TOKEN_TO_BE_REPLACED 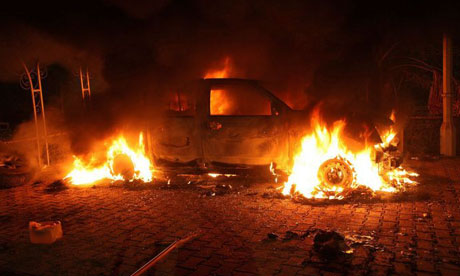 A vehicle and the surrounding area are engulfed in flames after it was set on fire inside the US consulate compound in Benghazi. Photograph: Str/AFP/Getty Images
Remember the Information Age? That was such an interesting period, when digital technology and the thirst for understanding converged to give the human race unprecedented access to heaps of revealing data, contemporaneous and historical. All you had to do was analyze the information without prejudice and the secrets of the world unfolded before you ? from the human genome to weekend crime in your town, from the value of the two-out stolen base to the origin of the universe. END_OF_DOCUMENT_TOKEN_TO_BE_REPLACED

How the CIA Bungled the War on Terror?
By?Pratap Chatterjee
Call it the Jason Bourne strategy.
Think of it as the CIA?s plunge into Hollywood — or into the absurd.? As recent revelations have made clear, that Agency?s moves couldn?t be have been more far-fetched or more real.? In its post-9/11 global shadow war, it has employed both private contractors and some of the world?s most notorious prisoners in ways that leave the latest episode of the Bourne films in the dust: hired gunmen trained to kill as well as former inmates who cashed in on the notoriety of having worn an orange jumpsuit in the world’s most infamous jail. END_OF_DOCUMENT_TOKEN_TO_BE_REPLACED The passing of the first death anniversary of?Neil Armstrong?last week is an opportunity to reflect on our own connection (admittedly flimsy) with the first man on the moon. Two years before Armstrong landed on the moon, Ghulam Abbas wrote?Dhanak, one of the best satirical short stories (The short story has been ably adapted by Shahid Nadeem into a play named?Hotel Mohenjodaro) of all times, and unnervingly prescient. Written in 1967, the story begins with the first man landing on moon, not Armstrong, but a Pakistani PAF Captain, Adam Khan. Local and international dignitaries gather on the rooftop garden of the 71-storied Hotel Mohenjodaro in Karachi to listen to Adam Khan?s message from the moon. His brief message is, ?I am Captain Adam Khan. I come from the district of Jhang in Punjab ? I have landed safely. All praise to Allah ? Pakistan Zindabad.? END_OF_DOCUMENT_TOKEN_TO_BE_REPLACED

The comedian Trevor Moore, of Whitest Kids U Know fame, has a video out for Funny or Die styled as a ?public service announcement? about NSA surveillance. Moore is a pessimist, explaining that ?elections are of no use? because the people who run for president are assholes, and instead suggests ?Operation Everyone Talk Like A Terrorist All the Time? to thwart any wiretapping efforts the NSA may be directing. Watch:
END_OF_DOCUMENT_TOKEN_TO_BE_REPLACED

Syed Talha Ahsan?is a British poet and translator. He has been imprisoned for seven years without a trial. The family is spending another Eid without him.