Photography is Not a Crime

The Homeland Security Bureau of the Miami-Dade Police Department has published a ?Terrorist Awareness Guide? where it advises citizens to be on the lookout for people taking ?inappropriate photographs or videos.?
And no, they are not talking about perverts shooting?up the skirts of women.
They?re talking about people taking photographs of surveillance cameras and other things that are plainly visible to the naked eye.
Here is an excerpt of what the pamphlet says:

Maybe you are at a National Monument and you
notice a person nearby taking a lot of photos. Not
unusual. But then you notice that he is only taking
photos of t he surveillance cameras, crash barriers at
the entrances, and access control procedures. Is that
normal for a tourist? Absolute not!
The following should cause a heightened sense of
concern:
??????? Unusual interest
??????? Surveillance
??????? Inappropriate photographs or videos
??????? Note-taking
??????? Drawing of diagrams
??????? Annotating maps
??????? Using binoculars or night vision devices

It should be noted that Detective Bustamante of the same homeland security bureau was one of the officers who responded to our?first Metrorail incident where we were ?permanently banned? for taking photos.
Bustamante proved pretty clueless of the law when he informed us we needed a permit to photograph anything within the Metrorail, regardless if we were shooting commercial or not.
Read the entire document below. The portion on photography is on the second page in the right-hand column circled in red.
Terrorist Awareness Guide MDPD-PINAC 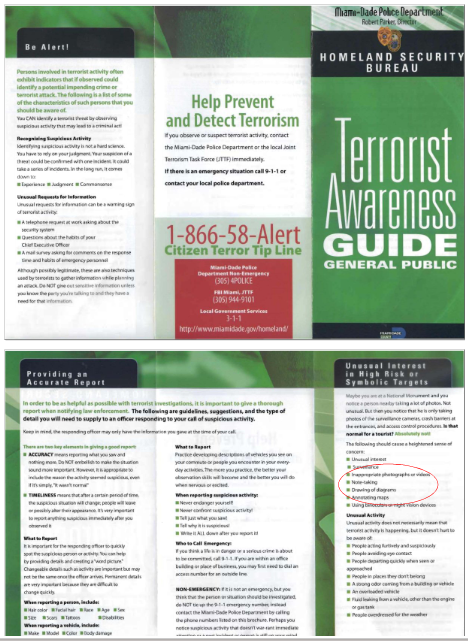 2 thoughts on “Photography is Not a Crime”