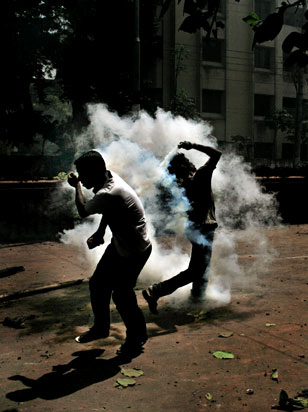 On August 20, 2007, army personnel stationed in an army camp on Dhaka University grounds beat up university students who were watching a football match. A close examination of publicly available information leads me to believe that the immediate response of the government was aimed at ameliorating matters, it expressed deep regret  and decided to withdraw the offending army camp from the campus; this leads me to believe that decision-making powers of how the situation should be tackled, still rested in the hands of the civil-military coalition. However, the situation seems to have changed rapidly, within a matter of 48 hours, with the military leadership, particularly the DGFI, taking control (this has been confirmed in press reports of the parliamentary standing committee’s probe of the August 20th incident). Whether the changeover occurred without any resistance from the civilian elements within the consortium government, or whether objections, however mild, had been raised, is not known.
It is difficult for me to ascertain at this stage whether the two incidents which stand out in public memory: (a) the chief of general staff Sina Ibn Jamali being heckled (roughed up?) by students when he went to see injured students at the Dhaka Medical College Hospital on the 20th evening (b) the ‘flying kick’ photograph, which was published the day after the incident (Daily Star, August 23, 2007) as students protests spread nationwide, and was spread virally through the internet — had anything to do with the DGFI-sation of the situation. If it did, who were involved and how, is not known; it requires future research. (Another issue which needs to be researched is whether forces ‘external’ to the two political parties, the AL, and the BNP(-Jamaat), had stoked the fires of the deepening political crisis in October 2006 over who would head the caretaker regime; although the bitter animosity between the two leaders is well-known, one cannot entirely dismiss the possibility that it might have been capitalised upon by interested quarters).
It may well be that the ‘flying kick’ incident acted as a catalysing factor in the brutal crackdown that followed. However, if the consortium government’s overarching objective was ‘de-politicisation,’ then, an assault on public universities was inevitable, sooner or later. Press reports of the recently-completed parliamentary standing committee’s probe of the 20th August incident hints this as a possibility.
From press reports, one also learns that the government was “finally” able to trace Dr. Fakhruddin Ahmed to deliver the standing committee’s letter to testify on the August 20th incident. He “has been living” in Maryland, USA, and had, at first, declined to accept the letter (Fakhruddin finally “traced”, The Daily Sun, April 13, 2011).
General Moeen too, lives in the USA (Florida). He too, expressed his inability to appear before the committee in person (because of illness) but consented to a teleconference interview, unlike Fakhruddin who resorted to a letter. The standing committee report has suggested that Fakhruddin, Moeen U Ahmed and some others be punished, but the prime minister seems to be adamant in her refusal to do so. An indemnity deal like Musharraf’s? Its a possibility that cannot be shrugged off lightly.
An assault on public universities was inevitable for two reasons, its longstanding tradition of dissent (1948-1971); and secondly, post-independence, particularly in the era of parliamentary politics (1990 onwards), the re-constitution and re-alignment of the allegiances of teachers and students, on party political lines; almost, mindlessly so. These have combined to making party control over university campuses essential for mobilising support for the ruling party, for controlling party opposition, and dissent, which has often resulted in turning campuses into battlegrounds. Given this historical context, I think that the consortium government’s decision to locate army camps on Dhaka University campus, needs to be viewed problematically.
The 20th August student protests prove that it is inevitably public university students who are the first to raise the alarm against authoritarianism, to organise movements of resistance. In 2007, when the protests spread from Dhaka University to other campuses,  noticeably strongly in Rajshahi University, when they spilled out on to the streets of Dhaka and other major cities, when common people, petty shopkeepers, hawkers, others whose homes and means of livelihood had been destroyed joined in, a ‘local’ protest rapidly took on the proportions of a ‘national’ one.
It just went to prove that public universities are still, ‘public.’
Published in New Age, Saturday, March 3, 2012.
Part VII
Part V
Part IV
Part III
Part II
Part I

One thought on “Part VI Military-installed caretaker govt, or a 'consortium' govt?”