You are cordially invited to the opening ceremony of Pathshala South Asian Media Academy at?the Goethe-Institut Auditorium, Dhaka, on Tuesday, 18 May 2010, at 5:30pm.
Through this event the Media Academy will start it’s journey, in cooperation with?Goethe-Institut Bangladesh, to provide world class training to journalists and media?professionals in broadcast, print and multimedia journalism.
Professor A.A.M.S. Arefin Siddique, Vice-Chancellor of the University of Dhaka, will inaugurate the event as the chief guest.
Nurul Kabir, editor of New Age, M. Hamid, CEO of RTV, Shahidul Alam, principal of Pathshala, Angela Gr?nert, director of Goethe-Institut Bangladesh and Arnob Chakrabarty, head of training at the Media Academy will also speak on the occasion. 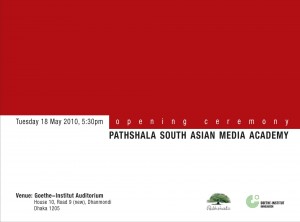 The launch, which was to take place alongside the photo exhibition “Crossfire” by Shahidul Alam, on the 22nd March 2010, was blocked by the government.

Architect Rafiq Azam explains his ideas for the building in a consultation meeting with departmental heads.

Plans are at an advanced stage for the setting up of a “state of the art training facility” in Bangladesh which aims to produce “honest, courageous, energetic, passionate and skilled media professionals” operating throughout South Asia.

The man behind the academy is Shahidul Alam, principal of the Pathshala South Asian Institute of Photography and managing director of the Drik Picture Library.
After extensive research, a meeting of international experts was held in December to discuss the scope, scale and funding of the planned academy.
Note: Declaration of interest – The editor of Media Helping Media, David Brewer, who compiled this report, is working with Shahidul Alam and his team on the project and will be one of those designing the curriculum and delivering the media modules.
Phase one of the project will run from a temporary structure adjacent to the existing Drik building. This will provide accommodation for immediate training classes. Phase two will see the construction of a 10-storey building, and phase three will be a 14-storey building with a much larger floorspace.

A Media Academy Grows in Bangladesh 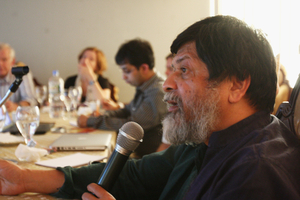 Shahidul Alam at stakeholders’ meeting in Dhaka. ? Brian Palmer
Dhaka, 3 February 2010 ? A few months ago I received a call from Dr. Shahidul Alam, a mentor and colleague who has become a friend. Alam, an accomplished and peripatetic photographer, journalist, and activist, invited me to Dhaka to join a team charged with setting up a media academy for Bangladeshi journalists. Such an academy had been part of his plan for years, but he?d been consumed by other projects?building a career as well as a world-class photo agency, a degree-granting school of photography, and an international photo festival.
Years ago, he identified the mission: Create a training institute for aspiring and working journalists that would raise the generally low professional and ethical standards in Bangladesh. The core mission, however, would be a civic one: To inculcate in students a sense of responsibility to the public and a firm commitment to building a more democratic society.
A tall order, to be sure, but a familiar one. In collaboration with colleagues, advisers, and workers, the Drik photo agency, Pathshala South Asian Institute of Photography, and Chobi Mela photo festival have become prime movers in Bangladesh. They have also become internationally recognized entities. Pathshala graduates fill staff photographer positions at the leading newspapers; along with their Drik peers, they field assignments from abroad and shoot for outfits like European Press Agency, The Guardian, New York Times, and others.
Alam had signed on other ?media experts??David Brewer and DJ Clark, two media trainers with years of international experience, and Arnob Chakrabarty, a Bangladesh-born Dutch journalist, who had committed to three years in Dhaka and was shipping his family over. Was I in, he asked me as we Skyped from our respective homes in Brooklyn and Dhaka? I couldn?t give him a quick answer.
more at:

Creating opportunities for South Asian journalists from David Brewer on Vimeo.
Shahidul Alam, principal of the Pathshala South Asian Institute of Photography and managing director of the Drik Picture Library, talks about the Bangladesh Media Academy he is setting up in Dhaka. He says the Academy will offer the country’s journalists – and journalists from the region and further afield – new opportunities. Alam says one of the aims is to produce media leaders of the future. More information about the academy.
India Printers and Publishers on Media Academy

One thought on “Media Academy”