Skip to content
Like most photographers in conflict zones, Stanley Greene has spent a lot of time with nongovernmental organizations, befriending aid workers who dealt with war, famine and refugees. They not only shared the same concerns as he, but also made it possible for him to gain access to the crisis zones.
Mr. Green traveled to Dhaka, Bangladesh, in July 2011, to photograph a hospital operated by M?decins Sans Fronti?res (M.S.F.), a group that photographers often accompany while on editorial assignment. But even though he was shooting many of the same things he had often photographed ? and in similar ways ? this felt different. This time, M.S.F. was paying him to photograph, as part of its Urban Survivors project.
This might seem to be a minor difference, but it made Mr. Greene a bit uneasy. He had no problem with M.S.F.?s work ? the organization accomplishes its mission effectively. But he wondered about the appearance of a conflict of interest when he and his fellow members of Noor Agency or his colleagues at VII and Magnum are paid by private aid groups.
?The problem is that we say we will not work for Shell Oil because we don?t like their policies, but in the same breath, we have become the spokesperson for NGOs,? said Mr. Greene, 62. ?But let?s be real ? there?s only two kinds of people that go to conflict zones and places in crisis and that?s the NGOs and the journalists. We?re in bed with each other. You can?t operate without them. Any conflict, any crisis, you?re going to have to deal with an NGO. That?s just fact.?
Shrinking editorial budgets have translated into fewer assignments where photographers can shoot in-depth essays on issues like the effects of war or famine or disease. While some photographers have sought alternative funding through Kickstarter or foundations, assignments from private aid groups have proven to be more reliable ? sometimes providing the only access to stories that might otherwise go untold. But photojournalists? increasing reliance on paid assignments from these groups raises troubling questions about the nature of objectivity and the appearance of undue influence.
The Photo Philanthropy foundation started an annual award in 2009 to encourage photographers who work with nongovernmental organizations. The foundation gives $15,000 to a professional working with NGOs and $2,000 each to an amateur and student photographer who has worked with nonprofit groups. The foundation?s intent is to encourage social change through nonprofit organizations effectively using photography to further their goals.
?Many NGOs do not know how to use photography well,? said Kathleen Hennessy, the foundation?s director of awards and exhibitions. ?When you show them the difference between high-quality professional photography and their nephew?s hobby, they can really feel the difference, feel the impact of the pictures.?
Photographers have long shot corporate work to finance personal projects and to help them survive on the small day rates from most editorial assignments. Mr. Greene says he thinks it is important to consider who is paying photographers to do their work. He wonders if working for nonprofit organizations like M?decins Sans Fronti?res, as opposed to just running into them in the field, affects his coverage.
?You have to follow your own instincts,? he said. ?The problem is today, there?s no money in magazines and newspapers.?
The Magnum Foundation has tried to address the lack of editorial assignments by directly financing photographers working on long-term projects that address global social issues.
Susan Meiselas, the foundation?s president, has sparked many debates about the implications of working for nongovernmental organizations. Like Mr. Greene, she has allowed NGOs, that she thinks do good work, to use photos she first took on assignment for editorial clients. The key, she said, is ?maintaining the integrity of the work,? especially given the industry?s tight economics.
?It?s a struggle to be independent, to truly follow your own instincts in work whether in the media, or a book, or an exhibition on a wall,? she said ?How do you afford to have that level of independent thinking and image-making?? 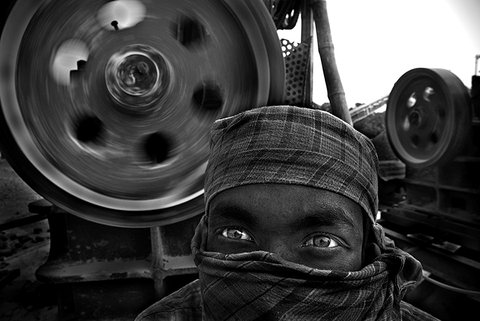 Khaled Hasan for Save the ChildrenThe stone-crushers of Khaled Hassan?s project face many challenges. Besides being hazardous, their industry is unregulated, employs young children and pays very little over long hours.

Whether you are working for media, corporations or nongovernmental organizations, Ms. Meiselas says, there is often ?a trade-off? ? but you should judge it by whether ?it makes you feel good and contributes to the possibility of social change.?
While Ms. Meiselas prefers to work for the editorial outlets she thinks have integrity, she noted that magazines and newspapers determine how and where a photographer?s images are used. ?That has always been the struggle for photographers,? she said.
Working for aid groups can be similar to producing a corporate report but for a cause that might make one feel more comfortable, if not altruistic.
Ms. Meiselas is also a member of the Magnum Photo Agency, which did a large project with the nonprofit Global Fund to Fight AIDS, Tuberculosis and Malaria. The photographer-owned agency ?completely controlled the making of the work,? she said. ?They paid the bills and they definitely wanted to visit around the issues. But the editorial content was completely the photographer?s, from even which clinics they visited to which nations they worked with.?
The VII Agency has aggressively sought out partnerships with nonprofit groups to compensate for the dwindling revenue streams from editorial markets. Stephen Mayes, the agency?s director, says that VII has never thought of itself as strictly a journalistic organization, as much as a group of photographers trying to achieve specific social goals.
?From the very outset of my career, I?ve recognized that the traditional media also has an agenda, and that each publication has a very different world view,? he said. ?By working with them, you?re effectively endorsing that world view.?
He says he believes that the same criteria should be applied to everyone photographers work with and that ?all NGOs are not equal.? Photographers have different roles working with a nongovernmental organization or with an editorial publication, and he says it is important to be transparent about that. Sometimes VII photographers are working as ?journalists, in a traditional sense, for The New York Times, or Time magazine, and there?s an element of neutrality. And at other times there will be a mission.?
And while ?it?s not always about being neutral,? Mr. Mayes said it was crucial to apply journalistic standards to all the work.
?I think that all photographers have considerable responsibility for the messages they provide,? he said. ?We have to assume that every picture we put out is going to have an effect somewhere. Therefore we need to think very carefully about that in choosing the subject that we want to photograph and in choosing the partner we want to work with.?
He added, ?You need to ensure that the end result matches your ideals, and that?s the question we should all be considering all the time.?
But it is not always easy to discern the answer to that question. Even with groups whose image of one of selfless devotion to the impoverished, photographers should do research to ensure the group?s actions match its promises. And when it comes to the ethical questions about a photographer?s client ? and paycheck ? it can get murky.
?There?s a lot of times when we don?t know who?s backing what,? said Mr. Greene, who lives in Paris. ?There are newspaper owners in Europe who have been involved in arms dealing.?
Mr. Greene received a $20,000 grant from Getty Images in 2011 for his project on electronic trash around the world. Getty?s support, he said, was as much spiritual as it was financial.
But Getty has since been bought for $3.3 billion by the Carlyle Group, which has investments in defense industries.
?What do I do?? Mr. Greene pondered. ?Do I suddenly say, ?I?m going to have to give back the money because I?m against organizations that support militaries?? You have to work with what you got.? 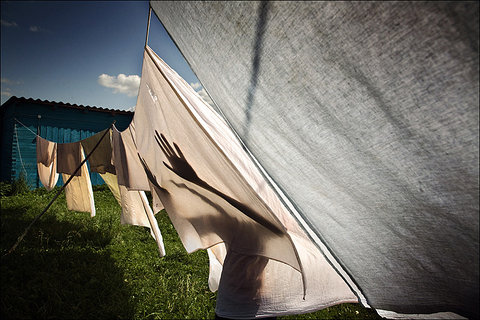