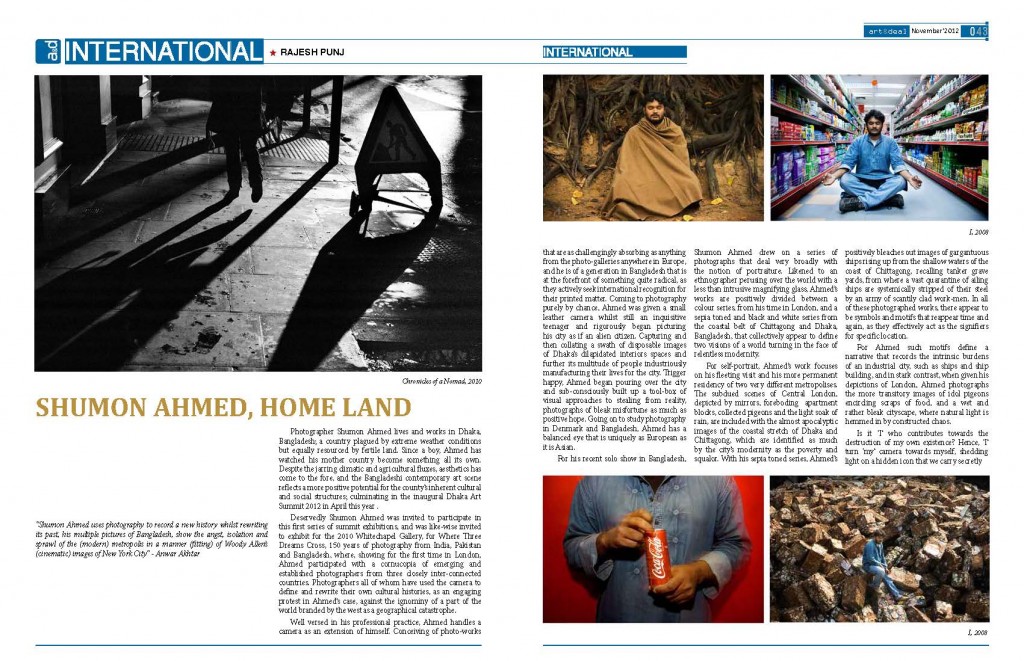 Photographer Shumon Ahmed lives and works in Dhaka, Bangladesh; a country plagued by extreme weather conditions but equally resourced by fertile land. Since a boy, Ahmed has watched his mother country become something all its own.? Despite the jarring climatic and agricultural fluxes, aesthetics has come to the fore, and the Bangladeshi contemporary art scene reflects a more positive potential for the county?s inherent cultural and social structures; culminating in the inaugural Dhaka Art Summit 2012 in April this year .
Deservedly Shumon Ahmed was invited to participate in this first series of summit exhibitions, and was like-wise invited to exhibit for the 2010 Whitechapel Gallery, for Where Three Dreams Cross, 150 years of photography from India, Pakistan and Bangladesh, where, showing for the first time in London, Ahmed participated with a cornucopia of emerging and established photographers from three closely inter-connected countries. Photographers all of whom have used the camera to define and rewrite their own cultural histories, as an engaging protest in Ahmed?s case, against the ignominy of a part of the world branded by the west as a geographical catastrophe.
Well versed in his professional practice, Ahmed handles a camera as an extension of himself. Conceiving of photo-works that are as challengingly absorbing as anything from the photo-galleries anywhere in Europe, and he is of a generation in Bangladesh that is at the forefront of something quite radical, as they actively seek international recognition for their printed matter. Coming to photography purely by chance, Ahmed was given a small leather camera whilst still an inquisitive teenager and rigorously began picturing his city as if an alien citizen. Capturing and then collating a swath of disposable images of Dhaka?s dilapidated interiors spaces and further its multitude of people industriously manufacturing their lives for the city. Trigger happy, Ahmed began pouring over the city and sub-consciously built up a tool-box of visual approaches to stealing from reality, photographs of bleak misfortune as much as positive hope. Going on to study photography in Denmark and Bangladesh, Ahmed has a balanced eye that is uniquely as European as it is Asian.
For his recent solo show in Bangladesh, Shumon Ahmed drew on a series of photographs that deal very broadly with the notion of portraiture. Likened to an ethnographer perusing over the world with a less than intrusive magnifying glass, Ahmed?s works are positively divided between a colour series, from his time in London, and a sepia toned and black and white series from the coastal belt of Chittagong and Dhaka, Bangladesh, that collectively appear to define two visions of a world turning in the face of relentless modernity.
For self-portrait, Ahmed?s work focuses on his fleeting visit and his more permanent residency of two very different metropolises.? The subdued scenes of Central London, depicted by mirrors, foreboding apartment blocks, collected pigeons and the light soak of rain, are included with the almost apocalyptic images of the coastal stretch of Dhaka and Chittagong, which are identified as much by the city?s modernity as the poverty and squalor. With his sepia toned series, Ahmed?s positively bleaches out images of gargantuous ships rising up from the shallow waters of the coast of Chittagong, recalling tanker grave yards, from where a vast quarantine of ailing ships are systemically stripped of their steel by an army of scantily clad work-men. In all of these photographed works, there appear to be symbols and motifs that reappear time and again, as they effectively act as the signifiers for specific location.
For Ahmed such motifs define a narrative that records the intrinsic burdens of an industrial city, such as ships and ship building, and in stark contrast, when given his depictions of London, Ahmed photographs the more transitory images of idol pigeons encircling scraps of food, and a wet and rather bleak cityscape, where natural light is hemmed in by constructed chaos.
Is it ?I? who contributes towards the
destruction of my own existence? Hence, ?I?
turn ?my? camera towards myself, shedding
light on a hidden icon that we carry secretly
Pages from issue 53 Art and Deal Nov 12
Shumon Ahmed graduated from Pathshala
Please Retweet #photography #pathshala #bangladesh #art