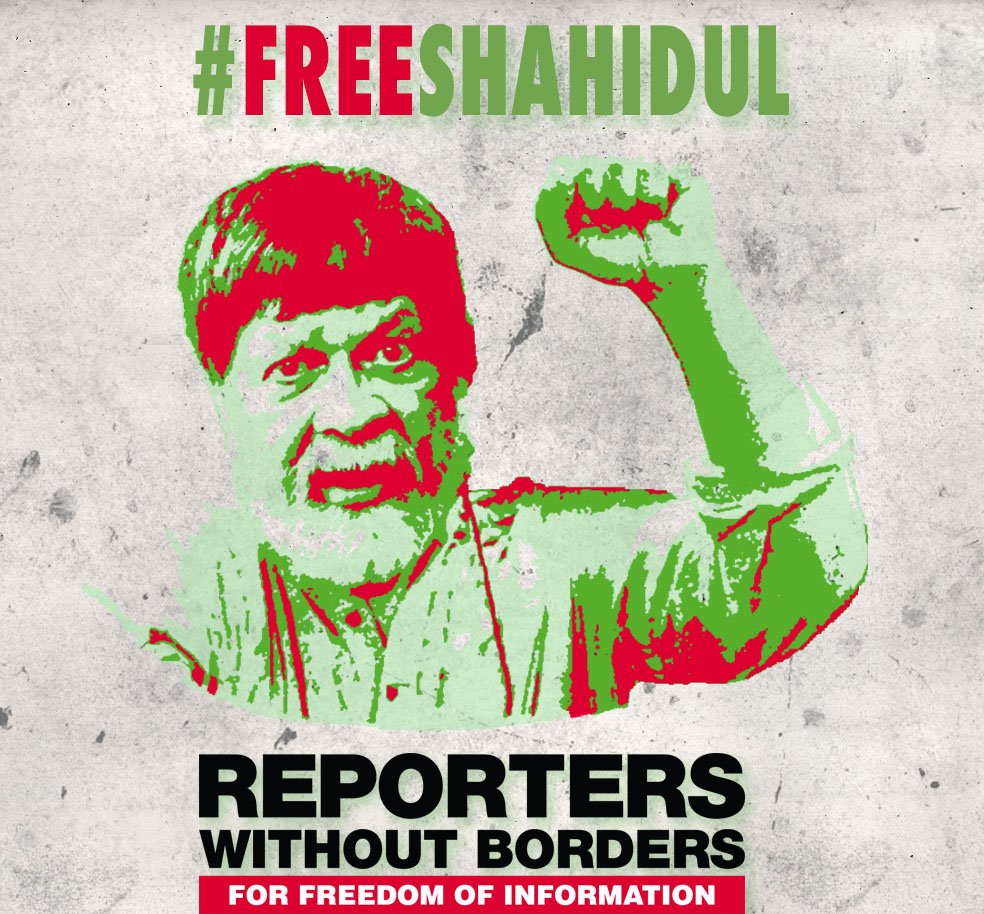 On the night of 5 August renowned Bangladeshi photographer Shahidul Alam – an old friend of and contributor to New Internationalist – was seized from his home in Dhanmondi, Dhaka, by men claiming to be plainclothes police officers. He appeared in court late in the afternoon of the following day, when the Detective Branch of the police requested and was given seven days’ detention during which they would interview him about his comments on the recent student demonstrations in Dhaka. Photographs and videos of his arrival at the Dhaka Metropolitan Magistrates’ Court show him to be barefoot and having to be half-dragged, half-supported along. He managed to say to a reporter present: ‘I was hit (in custody). (They) washed my blood-stained punjabi and then made me wear it again.’

He is accused under section 57 of the Information and Communication Technology Act of using ‘fantastical information’ to spread ‘lies’ among the population, spreading information with intent to provoke, attempting to ‘invalidate and question’ the government on the international stage, ‘deteriorating’ the law and order situation, conspiring to spread ‘fear and terror’ and ‘abusing’ an electronic platform to do so.

Alam is a long-standing and outspoken defender of human rights and free expression in Bangladesh. Students have been demonstrating in Dhaka since 29 July. They were originally demanding better road safety after two school students were killed by a reckless bus driver but subsequently have been protesting against the excessive force used against demonstrators not just by police (who used rubber bullets and teargas) but also by vigilante groups. Alam himself had his video camera smashed while ‘filming Chhatra League members wielding metal rods and sticks chanting “Joy Bangla” slogans and chasing students’.

In addition to posting comments on Twitter and Facebook, Alam gave an interview on Sunday evening to Al-Jazeera in which he said: ‘I think what we need to do is to look at what has been happening in the streets today. The police specifically asked for help from these armed goons to combat unarmed students demanding safe roads. I mean, how ridiculous is that? Today, I was in the streets, there were people with machetes in their hands chasing unarmed students. And the police are standing by watching it happen. In some cases, they were actually helping them…’Amnesty says: ‘Shahidul Alam must be immediately and unconditionally released. There is no justification whatsoever for detaining anyone for solely peacefully expressing their views. His arrest marks a dangerous escalation of a crackdown by the government that has seen the police and vigilantes unleash violence against student protestors.’

Shahidul Sir of Drik gallery has been detained and has been denied of his right to a lawyer. #FreeShahidul #WeWantJustice #road pic.twitter.com/UbjxvA5c3E

Shahidul Alam says he was not allowed to have a lawyer, despite his demands. And that he was beaten by his captors who wanted to coerce him into giving a statement. Video via Arfun A. #freeshahidul

I have known and worked with Shahidul for more than 25 years. He is not only a remarkably talented photographer and journalist in his own right but has championed the cause of photographers and journalists right across the Global South. He edited a whole issue of New Internationalist in 2007 called ‘Another View: the South takes the pictures’. But he has gone way beyond mere advocacy on the issue: he set up the photo agency Drik and established the Pathshala Institute, which has trained generations of aspiring photographers from the subcontinent. He also helped establish the international photo agency Majority World.

In 2000 I travelled to Dhaka to work with Shahidul on a magazine that looked at the problems associated with aid through the prism of Bangladesh. If I had not been aware before of the dangers that are part and parcel of his work, they certainly came home to me in the course of this trip. Bangladesh is notionally a democracy: it has elections in which the two main political parties trade places. But protest and dissent there involve much greater risks than for activists in the West. Shahidul sees no alternative but to accept those personal risks in order to document human rights abuses and to tell the stories of individuals adversely affected by them. He is one of the bravest journalists I know – and I urge you to join the international campaign for his immediate release.

A photographer, writer, curator and activist, Shahidul Alam obtained a PhD in chemistry before switching to photography. His seminal work “The Struggle for Democracy” contributed to the removal of General Ershad. Former president of the Bangladesh Photographic Society, Alam set up the Drik agency, Chobi Mela festival and Pathshala, South Asian Media Institute, considered one of the finest schools of photography in the world. Shown in MOMA New York, Centre Georges Pompidou, Royal Albert Hall and Tate Modern, Alam has been guest curator of Whitechapel Gallery, Winterthur Gallery and Musee de Quai Branly. His awards include Mother Jones, Shilpakala Award and Lifetime Achievement Award at the Dali International Festival of Photography. Speaker at Harvard, Stanford, UCLA, Oxford and Cambridge universities, TEDx, POPTech and National Geographic, Alam chaired the international jury of the prestigious World Press Photo contest. Honorary Fellow of Royal Photographic Society, Alam is visiting professor of Sunderland University in UK and advisory board member of National Geographic Society. John Morris, the former picture editor of Life Magazine describes his book “My journey as a witness”, (listed in “Best Photo Books of 2011” by American Photo), as “The most important book ever written by a photographer.” View all posts by Shahidul