In the digital age, people document and share everything ? even insults to the fallen 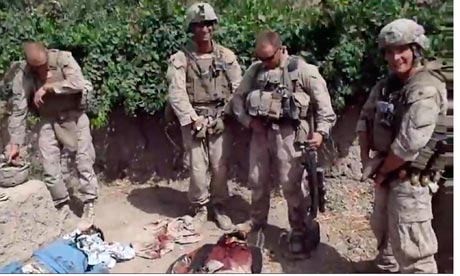 A still from a YouTube video allegedly showing US marines urinating on the bodies of dead Taliban soldiers. Photograph: Reuters
It is as much a document of the information age as a horror of war.?A video anonymously posted on YouTube this week?apparently shows four US marines urinating on the corpses of Afghans. They pose for a video camera held by a fifth marine, and perform their great deed against the dead with what looks like self-consciousness. They are doing it to be seen, in full awareness they are being filmed. Being filmed, and posting it for the world to watch, might actually be the point of the exercise.
Comparisons with previous incidents involving American forces, such asthe torture in Abu Ghraib prison in Iraq, seem unavoidable although there is actually a difference between torturing and abusing living prisoners, as happened at Abu Ghraib, and desecrating the bodies of the dead. Goya, in the print he called?Great Deeds Against the Dead, captured the futility and cowardice of violence against fallen enemies (assuming these are Taliban fighters and not civilians) and exposed, in the Napoleonic wars, the dirty secret that the dead do get mistreated amid the hate and anger of armed conflict.
Surely the truly striking parallel with Abu Ghraib is not in the nature of the crimes, but the urge to photograph them: and therefore to share them. Perhaps in future, guns will come with an in-built camera and a button that lets you instantly share the moment of battle. These images of a ritual insult to the fallen make their appearance in a world even more plugged into communication than it was in 2004, when the photographs of Abu Ghraib prison guards posing with persecuted prisoners emerged. At the time I remember thinking about those pictures in terms of horror films, trying to imagine the context in which people might so casually abuse power and so insouciantly photograph their own crimes.
But now it no longer seems surprising that violence and cruelty are self-documented in this way. What is not shared, nowadays? What is too private or shameful to put on YouTube? The video of urinating soldiers does not even seem that extreme or shocking ? it just takes its place among all the other videos everyone is watching and tweeting about.
Soldiers, it is true, documented their crimes with a camera long before the invention of digital video. J?rgen Stroop, the SS commander who led the crushing of the Warsaw ghetto uprising in 1943, kept?a photograph album that visually celebrates his achievement. It is the source of one of the most famous pictures of the Holocaust, of a Jewish boy putting up his hands as he is arrested. Another photo album of the Warsaw ghetto taken by a German soldier calls itself a “cultural document for Adolf Hitler”. What?did the first “professional” photographers of war think they were doing anyway, for that matter, back in the 19th century? WhenMatthew Brady?and other photographers put their equipment in covered wagons and followed the armies into battle in the American civil war, they were not sent by newspapers or the war office. They simply saw an opportunity and took it.
Right from the start, you could argue, war photography was disreputable, a dirty business, tainted by voyeurism. The desire to see the dead of battle was starkly served by Brady. Since then, war photography has become a profession, even an art, regulated unofficially by editors’ decisions of what is and is not to be shown ? but the voyeuristic impulse is still there in our appetite for photographs of war.
In that sense, what we are seeing here is an example of the democratisation of photography and film in the digital age. Just as anyone caught in a revolution or riot can take a picture on their phone and get it circulated before professionals are on the scene, so it seems these soldiers filmed their own ugly deeds for themselves. For Matthew Brady, war was a fact of horror to be shown. This video suggests it is now a scene of horror to be enacted so that it can be shared and talked about.
Earlier article