Abdul Quader Mollah has finally been convicted of war crimes committed in Bangladesh in 1971. Now a huge popular protest in Dhaka’s Shahbag district is demanding the death penalty. 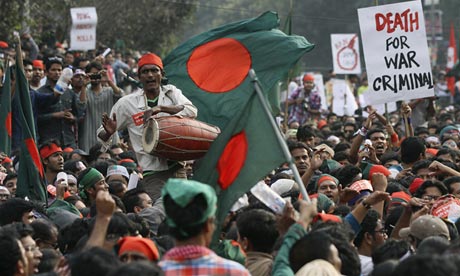 The Shahbag protesters resemble a jubilant flash-mob. Photograph: AFP/Getty Images
It all began with a victory sign. When Abdul Quader Mollah, assistant secretary-general of?Bangladesh‘s?Jamaat-e-Islami?party, emerged from the supreme court on the afternoon of Tuesday 4?February, he turned to the press waiting outside, smiled, and made a victory sign. An odd reaction for a man just sentenced to life in prison.
Mollah smiled because for him, a man convicted of beheading a poet, raping an 11-year-old girl and shooting 344 people during the?1971 Bangladesh war of independence?? charges that have earned him the nickname the Butcher of Mirpur ??the life sentence came as a surprise. Earlier this month, a fellow accused, Abul Kalam Azad, who is reputed to have fled to?Pakistan,?was sentenced to death in absentia. END_OF_DOCUMENT_TOKEN_TO_BE_REPLACED