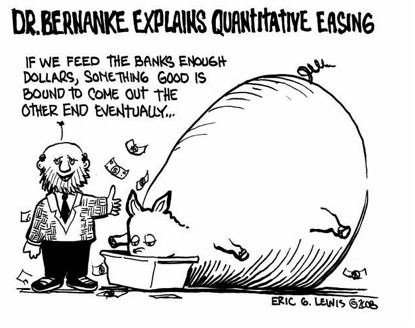 “I know you are very busy, but you must make time. I have something very important to tell you,” I insisted.
Later, sitting in Nurul Kabir’s office, I asked, did you know that the American Federal Reserve Bank is privately-owned?
Wha-at? No! How?
I spilled the beans: the Fed (as its known for short), America’s central bank, is actually not a central bank, its not government-owned, its actually a banking cartel, the American government doesn’t create, doesn’t print money, this banking cartel does it, and the US government is indebted to it, and Americans are taxed to pay off the interest to this cartel, and the interest is just huge, a staggering amount in trillions of dollars, talk of shudkhors (usurers), its an unbelievable scam, American people generally don’t know about it, the media doesn’t talk about it, it’s a huge big cover-up… I went on excitedly till I ran out of words.
A long pause, then I reeled off the names of some leftists, friends we have in common, and asked Kabir, do you think our anti-imperialist friends, very critical of American capitalism, and for good reasons too, know this? The real story?
No, came the immediate reply. Since I didn’t, I’m sure they don’t either. Oooh, how conceited, I yelped, as I took a long sip of tea, which had gone cold as I gabbled. We laughed, and I moved on to describe how I had come across this extraordinary tale. END_OF_DOCUMENT_TOKEN_TO_BE_REPLACED