“I just spoke to her fifteen minutes ago”, she falteringly said. She hadn’t been well for a few days. Knowing what we were going through, Saydia had shielded the rest of us from the situation. Every night, long after we had gone to sleep, she would be up, talking on Skype. Winnipeg was exactly twelve hours behind Dhaka. Exactly the other end of the world. But that’s where her mother was. And through all the turbulence we, and the country, were going through, it was her mother who nourished her. Saydia’s father professor AFM Kamal Uddin, had been the vice chancellor of Jahangirnagar University, when Rahnuma chaired the anthropology department. I had never met him, but through Rahnuma, I knew Saydia’s mother, Shamim Mahipara Kamal as ‘bhabi’ (elder brother’s wife). She was our self-appointed guardian. Since coming out of jail, it was bhabi’s bed we slept in. They would often tease me about the disproportionate affection I got, muttering about a patriarchal society. But bhabi had her favourites and she wasn’t going to let emancipated daughters get in the way. Dimer halua, jolpair achar, and all the other delicacies I had a weakness for – and I had many – were made for me when she was with us, and sent over from North America while she was away.

She had prayed all night when she heard of my arrest, and sent instructions regularly to Saydia, to make my favourite dishes to take to Keraniganj. When recipes failed, she pointed her daughter to youtube. Saydia and Rahnuma had far too much to deal with to worry about such trivial tasks. Bhabi clearly didn’t agree. Later, when I was released on bail, her instructions to Asfia (the daughter she was staying with, in Winnipeg) was to courier me sweets. At least that, she thought her daughters could manage. That Asfia and Palash, had to deal with Bhabi’s own illness, and the baby they were soon to have, was to her, a minor distraction. The least they could do was to arrange a Skype, so she could at least talk to me. Her failing health, failed to provide even that opportunity. The hospital was a three-minute drive. It was three minutes too far. It was the 29th December 2018. The day before the elections.

We had often enquired about the coffins of migrant workers that came in. The numbers had nearly trebled over the years. Little did we know that Bhabi’s coffin would be the first that we would encounter. The process of finding a funeral agent, getting the necessary paperwork done, booking flights from Winnipeg to Dhaka, took far longer than any of us had anticipated. Bhabi arrived on the 22nd January. The injuries I had received on election day, prevented me from going to the airport. The special ambulance with freezing facilities parked by the ‘community centre’ of the apartment block. I felt the cold outer walls. The white chador on the floor and the incense gave the community centre a solemnity it had never had before. The recitation of Quranic verses softly crept across.

Years ago when my father had died, Rahnuma and I had slept by his body, the day before he was buried. Bhabi’s wooden crate was laid on the white chador. Palash, Shabuj, Quamrul, Parvez and Tara, pried open the wooden crate to reveal the silvery metal coffin inside. They slid over the lid and untied the knot in the shroud.  There she was, quiet, dignified and silent. Her face was cold to the touch, but the skin still soft. I could imagine her waking up to check and see if the dimer halua was just right. That night we all slept on the community centre floor.

I went through my archives looking for photos of bhabi. I didn’t seem to have any. Perhaps they were in the laptop the police had confiscated. I did however, have photos of her garden. The kathgolap in bloom had always reminded us of her. As we water them each morning it is for her that they will bloom. 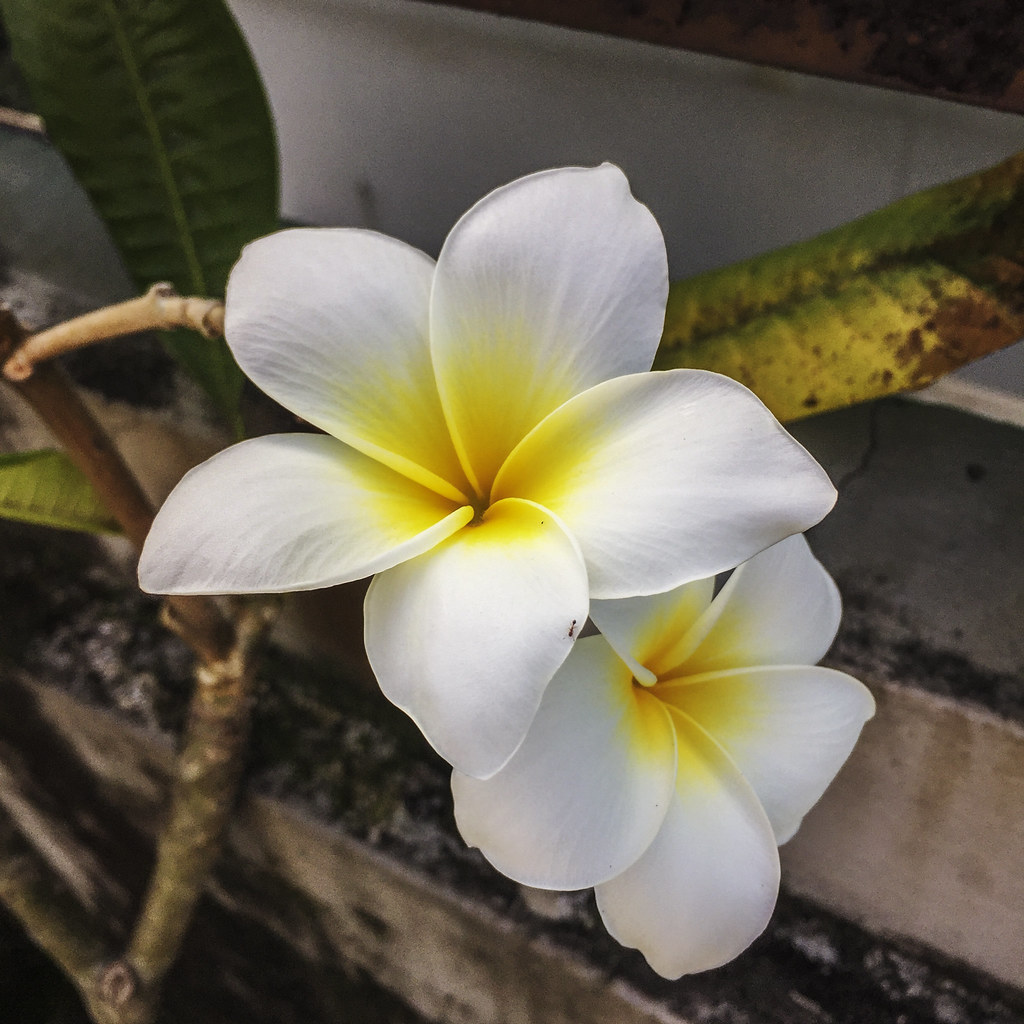 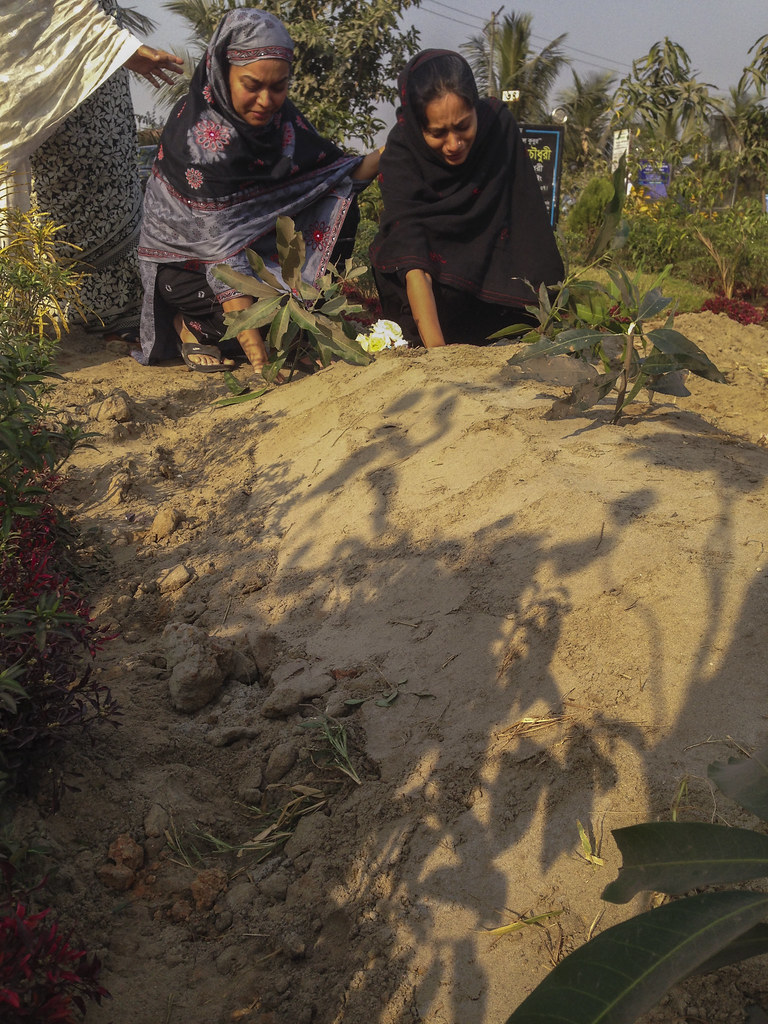 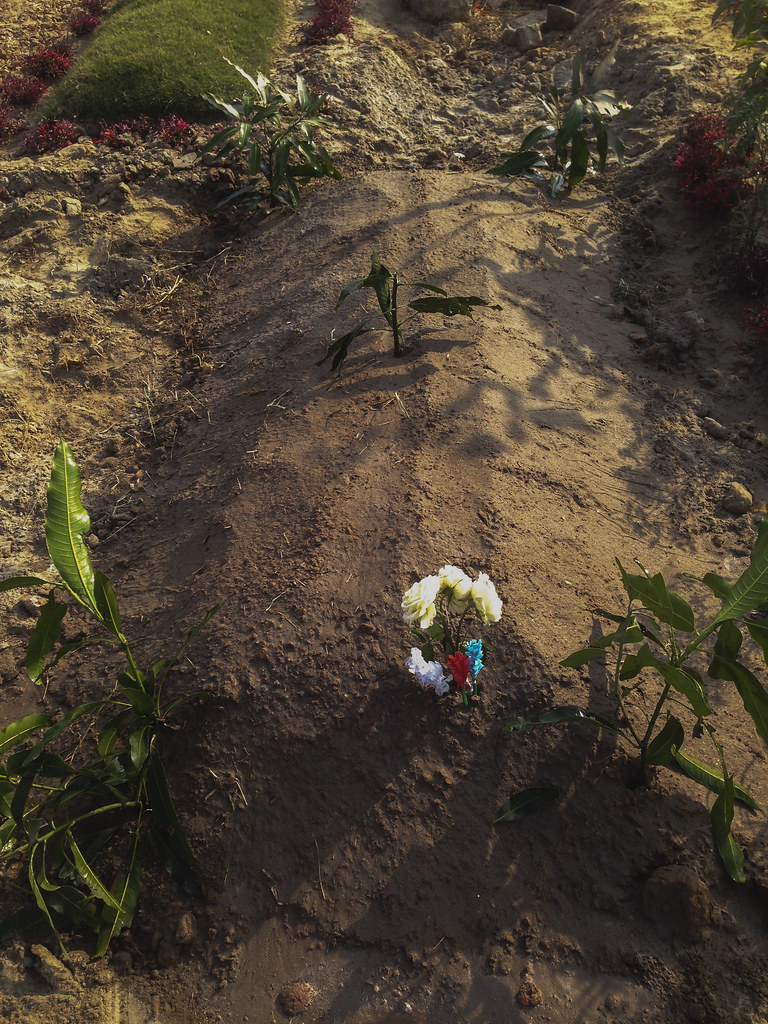 They had patted down the earth on her grave, and after Saydia and Asfia had said their goodbyes, they sprinkled water on the freshly laid clay. The drenched mango leaves, glistened in the late afternoon light. A solitary bunch of flowers kept vigil as we walked away. 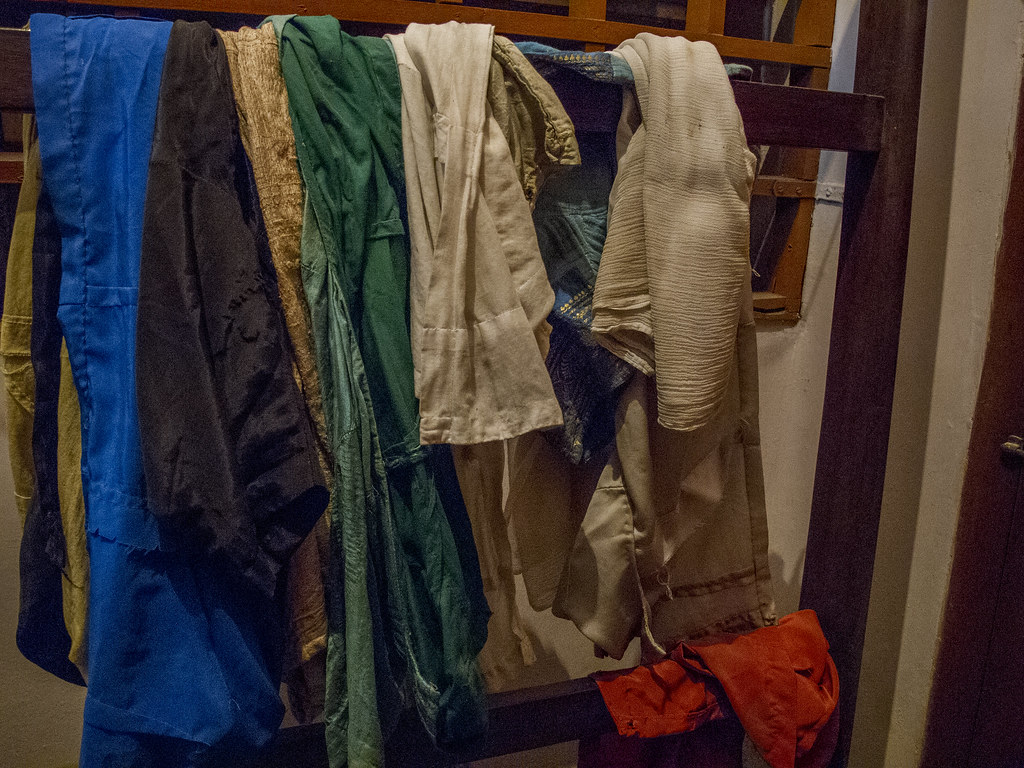 What I also came across, as I went through old photos was this one of my mother’s alna. I had photographed it shortly after she passed away. It had been in the corridor that now adjoins the teachers’ common room at Pathshala. Fresh flowers, old clothes, dimer halua, love has so many receptacles. Old photographs, perhaps the most embracing of them all. Bhabi and amma live on in all of them.