The eerie moonscape of Munem Wasif?s new photographic series, ?Land of Undefined Territory?, appears empty. On closer inspection, it reveals the scars of industrial activity, from vehicle tracks to stone crushing. The sense of menace and alienation is compounded by a three-channel video with a grating soundtrack.
These digital black-and-white shots were taken along an indefinite border between Bangladesh and India ? disputed land that is now home to unregulated mining but which also soaked up the blood of past upheavals, from the first, temporary partition of Bengal under the viceroy in 1905, to Partition in 1947 and the Liberation war of 1971. Ostensible documentary veers into questioning in Wasif?s deeply unsettling yet distanced probing of history, territory, ownership and exploitation.
Bangladesh?s bloody birth 45 years ago was ? often horrifyingly ? recorded by photographers, both foreign and, like the phenomenal Rashid Talukder, Bengali. Some images remain on show in the Liberation War Museum in Dhaka, which traces the nine months of mass killing that followed former East Pakistan?s declaration of independence on March 26. Forty-five years on, the installation by Wasif (born in 1983) reveals how the medium that bore such powerful witness is being transformed in the hands of today?s artists, in turn changing the international image of the country.
The work premiered in February at the third biennial Dhaka Art Summit in the Bangladeshi capital. An initiative of the private Samdani Art Foundation, it is held at the government-owned Shilpakala Academy. The free event drew more than 138,000 visitors, almost double the figure for 2014. In only five years, the summit has surmounted a nightmare of logistics (art from near neighbours in the politically tense subcontinent must be shipped via Dubai or Hong Kong) to raise the global profile of artists from a country more often subsumed under India.
For at least 20 years, Bangladesh?s photographers have been f?ted internationally. Earlier this year, Wasif?s work ?In God We Trust?, an installation exploring religion and identity, was at the Paris gallery Le 247. A group show of nine new-generation Bangladeshi photographers has just ended at New York?s Bronx Museum. Yet photography is still not admitted to the National Biennial (one of south Asia?s oldest) or taught at Dhaka university?s faculty of fine arts.
And although photography was given its own space at the second summit in 2014, this time it was integrated into all the thematic sections, says Diana Campbell Betancourt, the Samdani Foundation?s artistic director and the event?s chief curator, ?because here many don?t consider photography to be fine art?. The intention was to open the minds of both public and collectors.

Shahidul Alam at the Pathshala South Asian Media Institute, which he founded in 1998, says: ?Photography is so marginalised, we?ve created a space for ourselves.? This marginalisation stems, he says, partly from a ?media hierarchy where they saw photographers as an illiterate bottom rung; they had very little say. That?s something we?re far from.? The initiative followed Alam?s agency Drik, founded in 1989 and now south Asia?s biggest photographic archive. He is also founding director of Chobi Mela, Dhaka?s international photography biennial, which started in 2000.
From the classic pictorial black-and-white shot favoured in the 1960s, Alam pioneered a socially engaged narrative art whose power is partly its fusion of a documentary approach with artistic vision and social critique. His photographic installation ?Kalapana?s Warriors? comes to Rivington Place in London in April; in this work, he says, he uses ?new techniques ? laser etchings on straw ? making portraits of warriors carrying on the fight for justice?.

?It?s a banal question whether photography is art,? Alam says. ?Art can?t be medium-specific ? it?s what you do with your work.? Pathshala was founded to create an alternative photographic vision to that of disaster news and the ?tear-jerker? shots required for NGO fundraising.
The school?s nurturing of talent has borne fruit. The winner and a majority of the 13 finalists of the Samdani Art Award, which is given at the summit for the best artist from Bangladesh, are photographers. Daniel Baumann, director of the Kunsthalle Zurich, who judged the award, perceived a new generation?s ?urge to build up a visual memory for a very young country at the brink of maybe a new era?.
Of the Samdani award finalists, six are Pathshala graduates, and most say they do photojournalism or NGO work only under financial duress. Shumon Ahmed tells a story of a former classmate whose pictures of madrassas (Koranic schools) were used in an article ?on the ?future of fundamentalism?, when he wanted to tell the opposite story?.

Ahmed?s own haunting 2015 series, ?When Dead Ships Travel?, contains blurred images of the Chittagong ship-breaking yards made famous by Sebasti?o Salgado. Ahmed?s were shot on ?expired film and handmade pinhole cameras? with multiple exposures, creating a sense of disorientation as well as nostalgia. His focus is on ?human absence, the place, the stillness of the dead ships as part of the landscape?. His photographic installation ?Land of the Free?, also at Dhaka, conveys the trauma of a Bangladeshi former inmate of Guant?namo and the fragile line between sanity and madness; visitors don headphones and hoods to replicate a minute of the detainee?s torture.
Rasel Chowdhury?s engaging ?Railway Longings?, his winning series of 250 colour photographs, is the record of a journey along the disused train line he used as a child between Dhaka and the village of Jamalpur. Yet it becomes a contemplative journey into a shifting landscape, imbued with colonial history; in its deadpan way, it evokes loss and the passage of time. Neither good-quality film nor processing chemicals are readily available in Dhaka, so he shot with film bought in Bangkok and Kolkata, and cropped the prints into squares. He unassumingly describes his passionate work on the environment as ?just documentary?, yet adds, ?when I shoot something, I want to feel it?. 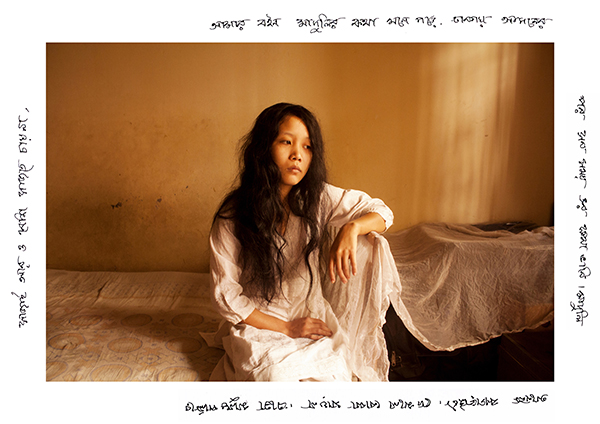 Others of the new-generation finalists emphasise portraiture. Salma Abedin Prithi?s series ?Dear Love?, incorporating letters as well as dual portraits, grew from building long relationships with subjects who were often initially strangers. Samsul Alam Helal incorporates performance in his images of people in Old Dhaka?s ?sweeper colony? ostracised as cleaners. His instant staging of them against red backdrops, and as they wish to be seen, renders them visible. Outstanding among the portraitists is Gazi Nafis Ahmed?s ?Inner Face? series, begun in 2008, which reveals sexual diversity (in a country where same-sex relationships are still criminalised) with an intense intimacy.
The past five years have seen a shift towards mixed-media and a more fluid photographic language, with greater collaboration between fine art and photography collectives. ?Photography grew up separately in this country,? Wasif says. Yet, ?nowadays, to have boundaries makes no sense.?

One thought on “Photography in Bangladesh: a medium on the move”