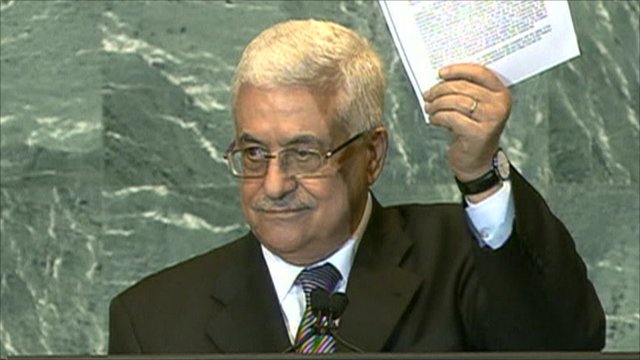 The Palestinians plan to ask the United Nations to upgrade their status to become a “non-member observer state” on 29 November 2012.
It follows a failed bid to join the international body as a full member state in 2011 because of a lack of support in the UN Security Council.
Here is a guide to what is likely to happen and its significance.
What are the Palestinians asking for?
The Palestinians have long sought to establish an independent, sovereign state in the West Bank, including East Jerusalem, and the Gaza Strip – occupied by Israel during the 1967 Six Day War. The 1993 Oslo Accord between the Palestine Liberation Organisation (PLO) and Israel led to mutual recognition. However two decades of on-off peace talks have since failed to produce a permanent settlement. The latest round of direct negotiations broke down in 2010.
Palestinian officials have since pursued a new diplomatic strategy: asking individual countries to recognise an independent Palestinian state with borders following the ceasefire lines which separated Israel and the West Bank before June 1967.
In September 2011, Mahmoud Abbas, the president of the Palestinian Authority (PA) and chairman of the PLO, sought full member-state status at the UN based on pre-1967 frontiers. But the bid effectively stalled two months later after Security Council members said they had been unable to “make a unanimous recommendation”. Mr Abbas is now expected to submit a downgraded request to the General Assembly for admission to the UN as a non-member observer state – the same position that the Vatican holds. Currently, the PLO only has “permanent observer” status.
The change would allow the Palestinians to participate in General Assembly debates. It would also improve the Palestinians’ chances of joining UN agencies and the International Criminal Court (ICC), although the process would be neither automatic nor guaranteed. If they are allowed to sign the ICC’s founding treaty, the Rome Statute, the Palestinians hope to take legal action in the court, for example, to challenge Israel’s occupation of the West Bank.