“Technology will make available to the leaders of major nations, techniques for conducting secret warfare, of which only a bare minimum of the security forces need be appraised… techniques of weather modification could be employed to produce prolonged periods of drought or storm.”

Weather modification technology is being perfected by the US under the High Frequency Active Aural Research Program (HAARP). From the military point of view, it is, as I had written last week, citing Professor Michel Chossudovsky (editor, Centre for Research on Globalization and visiting professor of economics, University of Ottawa)?a weapon of mass destruction.
According to keen observers, HAARP has the ability to trigger floods and hurricanes. To produce, as Brzezinski forecasts above, “prolonged periods of drought or storm.” To set off, as former US secretary of defense William Cohen had said, earthquakes and volcanoes. He, of course, had blamed `others’ for plotting these acts of terror. The baddies. The enemies of civilisation. I quote in full: “Others [terrorists] are engaging even in an eco-type of terrorism whereby they can alter the climate, set off earthquakes, volcanoes remotely through the use of electromagnetic waves? So there are plenty of ingenious minds out there that are at work finding ways in which they can wreak terror upon other nations? It’s real, and that’s the reason why we have to intensify our [counterterrorism] efforts” (1997).
The US government presents HAARP to the public as a harmless programme. As scientific and academic research aimed at further advancing “our knowledge of the physical and electrical properties of the Earth’s ionosphere which can affect our military and civilian communication and navigation systems” . A view endlessly regurgitated in mainstream media by a host of administration officials, defence and security experts, journalists and writers. Any questioning of the government version, interestingly enough, is met with ridicule, is immediately dubbed a `conspiracy theory.’ There are nutters, one comes across scores of them spooking away on the web, as is only to be expected, but it’s interesting to see how serious and well-founded questioning of the official versions of events, whether 9/11, or HAARP, immediately get labelled as `conspiratorial.’ At how this catch-all phrase is continuously employed to block off any critical inquiry in the public domain about America’s rulers, and their ways of ruling. To provide an instance in the case of HAARP, `Strange new Air Force facility energizes ionosphere, fans conspiracy flames’ (Noah Shachtman, Wired magazine, 20 July 2009). A title that is complicit in the all-powerful Western myth: `others’ wreak terror. `Others’ possess WMDs.
And what if the West’s `others’ don’t? What if a western leader who took his country to war on make-believe grounds, is finally forced to admit it publicly? As was former British prime minister Tony Blair who testified before the Chilcot inquiry last week. Reverting to, what seemed to me, amazing English bedtime story-speak, Blair responded: but Saddam was still a “monster.” And therefore he had to be removed. The world had to be made “safer.” So what if in that process, 1,366,350 Iraqis died? Blair insisted, he had no “regrets.” Like the former US secretary of state Madeleine Albright. When pressed about the death of 567,000 Iraqi children due to the 1990s US sanctions, she responded, “We think the price is worth it.”
In February 1998, in response to a report tabled by Mrs. Maj. Britt Theorin, Swedish MEP and longtime peace advocate on the “potential use of military-related resources for environmental strategies,” the European parliament’s committee on Environment, Security and Foreign Affairs called the HAARP project a matter of global concern because of “its far-reaching impact on the environment.” It passed a resolution calling for its “legal, ecological and ethical implications to be examined by an international independent body before any further research 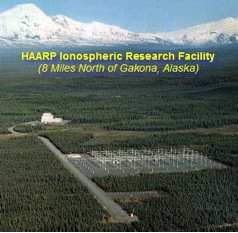 HAARP’s array can beam up to 3.6 megawatts of energy into the sky. Photo Joao Canziani 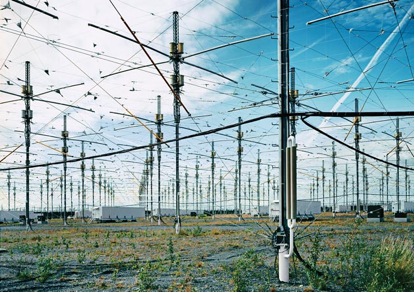 and testing” was conducted. It also expressed regrets at the “repeated refusal of the United States Administration to send anyone in person to give evidence to the public hearing [held by the committee in Brussels] or any subsequent meeting held by its competent committee into the environmental and public risks connected with the HAARP programme currently being funded in Alaska.” Despite all this, as an excellent documentary on HAARP made by CBC, Canada’s public broadcasting network points out, officials at HAARP still insist that “the project is nothing more sinister than a radio science research facility.”
The United Nations, on the other hand, inspite of a vast body of scientific knowledge, never includes in its climate change agenda the “issue of deliberate climatic manipulations for military use.” Even though, writes Chossudovsky, the UN 1977 Convention explicitly states that “military or any other hostile use of such techniques could have effects extremely harmful to human welfare,” a convention to which both US and Soviet Union were signatories. (Convention on the Prohibition of Military or Any Other Hostile Use of Environmental Modification Techniques, United Nations, Geneva, 1977).
The issue of “weather warfare” or “environmental modification techniques” (ENMOD) is not, as Chossudovsky points out, raised either by governments or environmental action groups. Even though both Americans and Russians have developed capabilities to manipulate the World’s climate. The publicly shared consensus is that greenhous gas emissions constitute the “sole cause” of climate instability. But in reality, the manipulation of climate for military use is potentially “a greater threat to humanity” than CO2 emissions. Military analysts are silent, metereologists do not investigate the matter, while environmentalists keep harping on global warming and the Kyoto protocol. It is a situation which, by being “narrowly confined to greenhouse gases,” serves Washington’s strategic and defense objectives.
Another documentary on HAARP, made by the History Channel, says: “Electromagnetic weapons … pack an invisible wallop hundreds of times more powerful than the electrical current in a lightning bolt. One can blast enemy missiles out of the sky, another could be used to blind soldiers on the battlefield, still another to control an unruly crowd by burning the surface of their skin. If detonated over a large city, an electromagnetic weapon could destroy all electronics in seconds. They all use directed energy to create a powerful electromagnetic pulse.” And also, this: “Directed energy is such a powerful technology it could be used to heat the ionosphere to turn weather into a weapon of war. Imagine using a flood to destroy a city or tornadoes to decimate an approaching army in the desert. The military has spent a huge amount of time on weather modification as a concept for battle environments. If an electromagnetic pulse went off over a city, basically all the electronic things in your home would wink and go out, and they would be permanently destroyed.” (WantToKnow.info team website).
With president Obama proposing a $548.9 billlion outlay for defence, a budget that boosts the Defence department’s outlay by 3.4% over the 2010 enacted level, does the HAARP official site’s answer to the Frequently Asked Question, Can I Visit HAARP?? “The HAARP Research Station does not employ sufficient on-site staff… as a result, we hold an annual open house at which any and all are invited”?sound convincing? (italics mine).
Unconvinced too, is Louise Lindley, who runs the coffee shop and trading post in the village that is HAARP’s closest neighbour. In response to the question, You have been here since the beginning. What do you? think they are doing down there? she replies, “They tell us we’re up here doing research on HAARP, we’re studying the northern lights, you don’t study the northern lights for 25 years, come on.” (Jesse Ventura exposes HAARP conspiracy, truTV).
(more, next week).
First published in New Age on 8th February 2010