Well it’s been well over 48 hours since I had a proper sleep. In the last 24 hours. I have been detained by the Border Security Forces (BSF). Handed over at midnight through a flag meeting between the BSF and BDR (Bangladesh Rifles). And then, ironically, sued by the BDR and arrested by Bangladesh police for trespass. I then spent the night (or what was left of it) in the police station. Had my equipment and mobile phone confiscated. We then went by jeep, on foot and by boat on the following morning to the nearest court about three and a half hours away.
I’ve now been given bail, but the case still stands. Next hearing on the 5th July 2009.
We were overwhelmed by the support we received, some from unusual sources. It was a genuine test of friendship as some of the people who were most forthcoming were people we had been critical of in our writing and activism. So very encouraging to know we can disagree and still respect each other. Remain friends.
They had confiscated my digital SLRs, but I had other means at my disposal, and?I still managed to sneak some messages out…
Rahnuma managed the control room briliantly and was my primary contact with the world.
Especial thanks to Nurul Kabir and Farooq Sobhan, as well as Azizur Rahim Peu, and my splendid colleagues and students at Drik, Pathshala and DrikNews and BLAST and the lawyers who represented me and the many many friends from all over the globe who ensured that I am around to photograph another day.
While I would not?recommend?this experience as standard practice, it was hugely reassuring to know I have so many loving friends, from all walks of life, and pretty much from everywhere.
Thank you all. I promise to continue making some people uncomfortable.
Shahidul
ps: sorry, can’t upload the more interesting images as the case is still pending.
Related links: 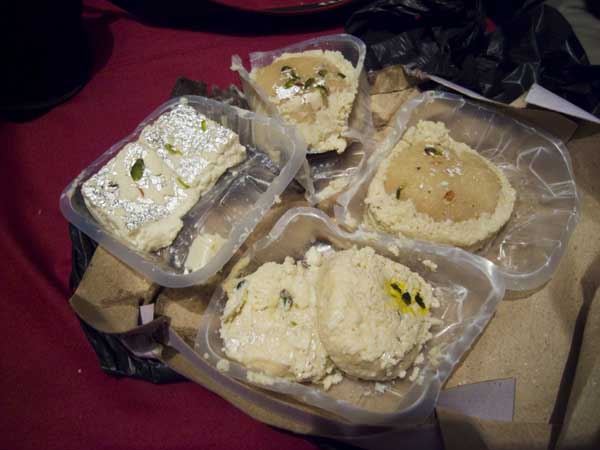 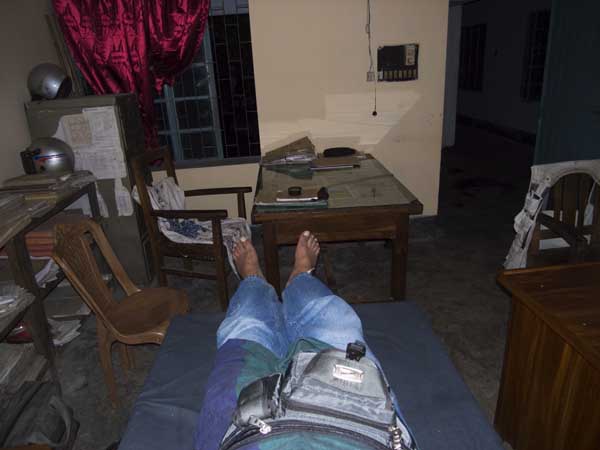 Trying to get some sleep on one of the tables at the police station. ? Shahidul Alam/Drik/Majority World 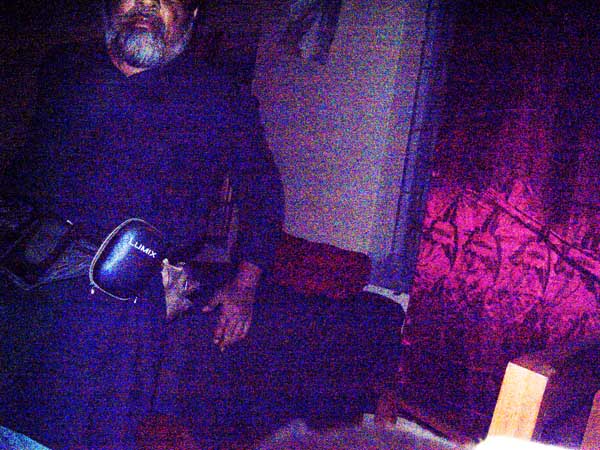 From:?drikbashi-bounces@lists.drik.net?[mailto:drikbashi-bounces@lists.drik.net]?On Behalf Of?Rahnuma Ahmed
Sent:?Wednesday, June 17, 2009 4:53 PM
To:?Naeem Mohaiemen
Cc:?Nava Thakuria; nil abir; jabber hossain; Nasrin Khondokar; zakir kibria;?taslima_74@yahoo.com; Zafar Sobhan; Drikbashi; Hana Ahmed; mala mukerjee; Brian Palmer; Nasir Mamun; Tarek Chowdhury; David Brewer; Saleem Samad;?rupafarzana@yahoo.com; Bruce Currey; moinul saber; Khademul Islam;KevinMcDermott@collectintel.com; munni saha; saiful islam; Mirza Taslima; Arafatul Islam; Azizur Rahim Peu;?smaltaf@drik.net; Asif Saleh; willem van schendel; kona; Fariha Karim; Suvendu Chatterjee; Meghna Guhathakurta; Jeroen Jonk; Ragni M. Kidvai; bablu changma; M. A. Akond; Nayanika Mookherjee; Shunling Chen; gitiara nasreen; Anu Mohammad; Shireen Huq
Subject:?[Drikbashi] Re: Shahidul Alam under arrest
?
dear friends
?
i want to thank each and every one of you?– and also all others who i’ve probably forgotten to put in this list –?who have for the last nearly 24 hours done everything? they could?and more, to make sure he got released, first from BSF detention, and today morning, after recovering from the shock that he’d been arrested again (this time by the bangladeshi police), jumped back into keeping up the unrelenting pressure which made it possible for him to walk out of the courthouse with bail.
?
in the last 24 hours, i have not, not even for a fraction of a second felt alone, because of you. saying `thank you’ is most inadequate, i can only hope that my words will be able to convey something of what i feel.
?
however, i’m afraid there is bad news: i spoke to shahidul immediately after he came out of the courthouse, and said, `so, you didn’t get to eat?jail er bhaat?(prison food)?’
?
he replied, `oh i;m sure there’ll be many opportunities in future!’
?
i hope that even after knowing this we will still remain friends!
?
the next e-mail will be from shahidul, or probably a blog posting. he’s expected to return to dhaka tonight.
?
hugs/in solidarity from everyone at drik, and me,
?
rahnuma
?
?
On Wed, Jun 17, 2009 at 3:02 PM, Rahnuma Ahmed <rahnumaa@gmail.com> wrote:
LATEST UPDATE: Shahidul has gotten bail!
?
in solidarity/r
On Wed, Jun 17, 2009 at 2:54 PM, Rahnuma Ahmed <rahnumaa@gmail.com> wrote:
?
UPDATE: Shahidul stepped into the Judicial Magistrate’s court 2/3 minutes ago. Earlier he signed a power of attorney which empowers his lawyer to represent him.
?
?
On Wed, Jun 17, 2009 at 12:54 PM, Rahnuma Ahmed<rahnumaa@gmail.com> wrote:
> UPDATE:
>
> Shahidul has reached Kurigram. On his way to Kurigram, he had been
> instructed to go to the police station first, there his confiscated camera
> and mobile phone were returned to him. He is now on his way to the court
> house.
>
> On Wed, Jun 17, 2009 at 11:28 AM, Rahnuma Ahmed <rahnumaa@gmail.com> wrote:
>>
>> UPDATE:
>>
>> Shahidul is on his way to the court in Kurigram. In the same boat are his
>> colleagues, Sumeru Chakravarty and Abul Kashem. Also, police headed by ASI
>> Amir Ali. Since Sumeru is in the same boat, I have been able to speak to
>> Shahidul, and also, to?remain updated of what’s happening, through Sumeru.
>>
>> An influential lawyer of the Kurigram Bar Association Advocate Siddiqur
>> Rahman has consented to represent him, the Vice President of the Bar
>> Association Advocate Abdul Khaleque will also be present at the hearing. If
>> they can reach Kurigram court by 11:30, it is expected that the hearing will
>> take place today. By all indications, he is expected to get bail.
>>
>> I am overwhelmed by messages of support and concern expressed by friends
>> in?Bangladesh, and abroad. And the stupendous all-out efforts being made to
>> ensure a speedy bail. My heartfelt thanks to each and everyone of you.
>>
>> Members of Manobadhikar Shangbadik Shomiti (Journalists for Human Rights)
>> have already reached the court premises. Kurigram Press Club members have
>> been informed, who have said they will be present at the bail hearing, with
>> food! Uttar Bongo Shangbadik Parishad (North Bengal Journalists Council) has
>> also been informed and their members will also show up at the court, to
>> rally support for Shahidul.
>>
>> in solidarity/r
>>
>> On Wed, Jun 17, 2009 at 7:43 AM, Rahnuma Ahmed <rahnumaa@gmail.com> wrote:
>>>
>>>
>>> Last night at 3am on Thursday 17 June, renowned Bangladeshi
>>> photojournalist Shahidul Alam telephoned from Rowmari?thana?to say he had
>>> been arrested. A case was filed by SI Amir Ali (0191-401-8992) of Rowmari
>>>?thana?under the Control Entry Act/4,1978?Bangladesh?(case number 6, dtd
>>> 17.06.2009). Shahidul spent the night in custody at the?thana. He is due to
>>> appear at court today, Thursday 17 June, and is expected to apply for bail.
>>> His camera and phone have been confiscated.
>>>
>>> The?case follows his arrest,?and subsequent 6 hour detention (including
>>> interrogation) yesterday, Wednesday 16 June,?around 6.10pm, by Indian border
>>> guards, BSF, while taking photographs for his Brahamaputra river project,
>>> one that encompasses?China,?Mongolia,?Tibet, and?India, and has been carried
>>> out over several years. While taking photographs in the Bangladeshi side,
>>> BSF guards had asked him to come over, and then detained him at Sahapara 21
>>> IPP, across the Memokar Char border, Rowmari, Kurigram
>>>
>>> I?appeal to all, on behalf of Drik to work for a speedy bail, and no
>>> unnecessary harassment.
>>>
>>> In solidarity,
>>>
>>> rahnuma ahmed
>>>
>>> rahnuma 01819-245-881
>>> saydia gulrukh 0191-340-0075
>>> fariha karim 01745-770-851 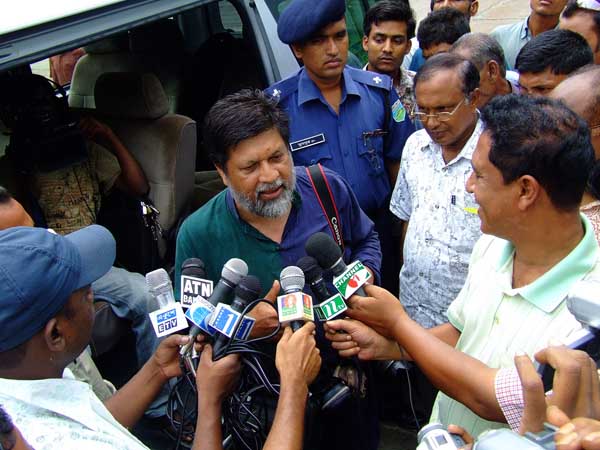 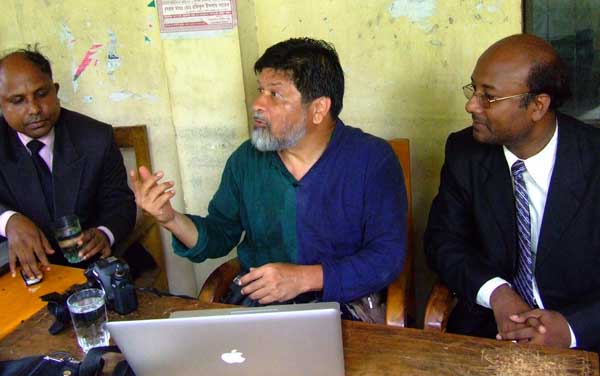