Runi Khan was working with me on trying to recreate the “Concert for Bangladesh” in Bangladesh.
It was far from easy trying to pull such a massive project together, but this note from Pandit Ravi Shankar made a big difference to us.
Goodbye Raviji. The angels will rejoice in your music.
——-
Dear Olivia
It is coming up to the 40th anniversary of the Birth of Bangladesh and time perhaps to reminisce about our memorable Concert for Bangladesh. The world has changed so much since then, but I hope the spirit that drove George and all of us to rise up as individuals against human rights abuses or to address natural calamities remains strong. I was therefore delighted to have been approached by our dear Bangladeshi friend Runi Khan, requesting us to join and give support to an initiative to re-stage the Concert ?in celebration of the 40th year of the independence of Bangladesh on 16th December 2011.
The intention this time round is to hold the concert in Bangladesh itself, illustrating how much development has taken place since our initiative in 1971. This project is spearheaded by Bangladeshis, Runi? – whom I have known for many years – and Dr Shahidul Alam, both are very respected in the field of events, photography, film and in cultural and social activism.? They have been plotting to celebrate the concert for years for its own sake but want to use the power of the world of artists to send out a strong message once again. I attach their brief treatment outline.
Their vision is to bring together as many of the performers from the original concert – sadly too many are no longer with us. You are our first port of call as you are instrumental in their being able to move forward with this meaningful and ambitious project and making it happen in 2011.? The idea would be to draw in artists also from the contemporary music scene to reach out to newer generations. The concert would be complemented by a documentary looking at the event then and now. More broadly, it will be accompanied by a programme of awareness raising initiatives.
I understand that Sukanya had introduced Runi to you at our concert at the Southbank Centre in London a few years back and Runi I believe had taken the opportunity to very briefly air her thoughts to you. She said she was touched at the time by your spontaneously positive response.
May I suggest that you meet Runi, as she lives in London. Once you understand first hand their concept and objectives please let me now how feel about this and we can take it from there. You will no doubt appreciate that that there will be a lot of logistics that they will need to address to put together an event of this magnitude. Time is of essence and as such an early response from you will allow them to move forward swiftly.
Warmest wishes
Ravi
Congratulatory letter from Raviji about the proposed Dhaka World Music Festival by Runi, and the Concert for Bangladesh that we were planning. 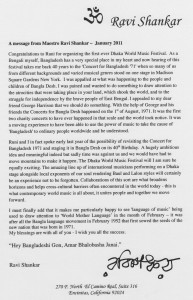 One thought on “Message from Ravi Ji”