Drik, Droom Caf? and friends of Lokkhi Terra
have pleasure in inviting

to an evening of Cuban classics, Afro-beat, samba and funky world fusion music
by 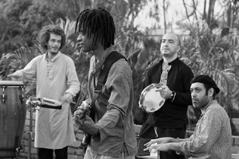 Twelve musicians are at the core of the band Lokkhi Terra and will mix traditions from around the world, using Bengali folk and groove as their starting points. They have all performed around the world at venues such as Ronnie Scotts, Royal Albert Hall, Royal Festival Hall, the House of Commons, Glastonbury and at Womad.? They were one of the critics’ choices at this year?s Womad festival in the UK, and was the band chosen to perform at the closing ceremony of the South Asian Games 2010.
Lokkhi Terra’s two albums No Visa Required, and Che Guevara?s Rickshaw Diaries, received much critical acclaim around the world.
Full Press Release