Today I believe in the possibility of love; that is why I endeavour to trace its imperfections, its perversions. ?
Frantz Fanon, Black Skin, White Mask (1952)
We are going to emancipate ourselves from mental slavery because whilst others might free the body, none but?ourselves can free the mind.
Marcus Garvey, speaking in Nova Scotia (1937)
The de-politicisation of Begum Roquiah 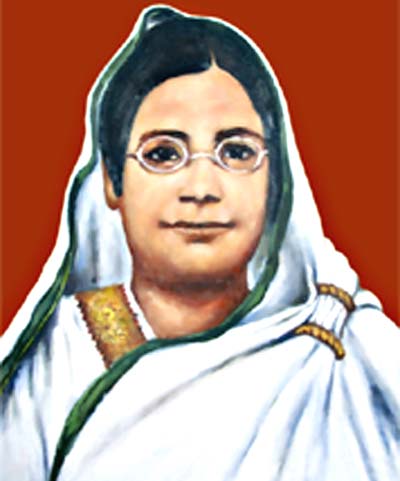 I AM not sure when and how it all began. I mean the ?de-politicisation? of Begum Roquiah (1880-1932, also spelt Rokeya). Of what she stood for.
I am quite sure it is closely tied to how she has been represented, one that congealed and hardened with the passage of time. A social reformer. A pioneer of Bengali Muslim women?s advancement. Devoted to the cause of women?s education; Roquiah, after all, was the founder of the Sakhawat Memorial Girls? High School in Kolkata (from 1911).
She is also celebrated as a writer. Of probably the first utopian fantasy in Indian literature, Sultana?s Dream (1905). Of essays. Of a novel too, Padmarag (1924). A fearless critic of porda, best revealed through Avarodhbasini (In Seclusion; written as a series of columns, 1928-30), a collection of 47 episodes consisting of ?historical and eyewitness accounts of events? that had occurred in the lives of women living in seclusion in different parts of India, in Bengal, Bihar, Delhi, Aligarh, Lucknow, Lahore. Many of these episodes are comic; a few unbelievably tragic. All in all, the slim book is a scathing indictment of the cultural beliefs and values of seclusion as practised among landed and wealthy Muslim and Hindu families. Its publication angered conservatives. It infuriated the religious orthodoxy. Mohammadi, the periodical, was reportedly flooded with letters.
Roquiah was witty. She was a satirist. A polemicist.
December 9 is Roquiah Day. This year I was one of the discussants at the programme in memory of Roquiah, organised by the Bangla Academy. I returned to my well-thumbed copy of Rokeya Rachanavali (Works of Begum Rokeya Sakhawat Hossain). As I riffled through the pages, my eyes fell on one of my favourite passage which ends with these lines, one that is probably deeply-etched in the minds of many other women: ?If we do not think of our situation, no one else will. Even if someone does, it will not be of much use? (p 28).
A pioneer. A social reformer. An educationist. A writer. These are the clothes pegs on which Roquiah?s life, her achievements, and her struggles are hung on, laid out. Year after year. From the head of state down to government ministers, from leaders and activists of the women?s movement to litterateurs, headmistresses and schoolteachers as they hold forth in the flurry of programmes organised in the nation?s towns, cities, district headquarters, a mother?s club here or there. In her memory, to pay homage.
As I pored over her writings, marvelling at her play on words, her sense of irony, her self-deprecating style, her razor-sharp intellect, Begum Roquiah?s dominant portrayal ? one which had seemed all-enveloping and seamless ? gradually began to unravel. What most researchers and scholars have noted is that Roquiah?s family background was elite, that the institution of seclusion which she so cuttingly critiques was not universal in India, that the practice of porda was a class-ed phenomenon. Undoubtedly. And one that was, I would like to add, deeply embedded in the fixed hierarchy of ?rank? and ?station? centred around rural land ownership (malik-proja, shombhrom, ijjot).
But surely there are other class issues too, to do with class processes that shape and forge history, that sweep people up and position them, representing them in ways that tell only half the story? Roquiah lived through social, economic and political upheavals. The older social order was rent asunder as a new one was being forged in colonial Bengal, in the period stretching from the late nineteenth century to the early decades of the twentieth century. Earlier social inequities associated with rural landed privilege of Bengali Muslim families (often Urdu-speaking) gradually gave way to modern inequalities as the newly-emerging Bengali Muslim middle class (fully Bengali-speaking) ? an educated and salaried class formed to fulfil British imperial needs, its members drawn overwhelmingly from rural and peasant backgrounds ? began to rapidly form and coalesce. It was a historical juncture. Roquiah was born at that juncture, she lived her life through times that were turbulent.
As Leonore Davidoff and Catherine Hall, and a host of feminist historians have argued, class formation is gendered; from its very inception. And so it was, among Bengali Muslims, too. Seclusion and strict disapproval of female education became rigidly identified with the old order, one that had to give way to the march of progress, to women?s freedom and emancipation. This meant re-structuring sexual difference on modern lines: a companionate marriage with an educated woman for a wife, the individual husband as bread-earner, a monogamously-married wife who was sovereign in her shongshar (an increasingly nuclearising household), and in her husband?s heart.
The formation of the Bengali Muslim middle class was a long, torturous and uneven process; one that is historical, and continuous. What I find striking is that Roquiah was critical of both social regimes, but we are familiar only with her critique of the older social (male) leadership. Her critical observations of the newly-emerging forms of (male) domination in marriage, family and household have remained suppressed.
If Roquiah was alive, she would most likely have said it is we women who are to blame. To quote her, ?When we lost our capacity to differentiate between freedom and servitude, between advancement and debasement, it is then that men became ?bhusshami? (owner of land), ?grihosshami? (owner of the homestead), and gradually, our ?shami? (owner/husband).?

IN THE Avarodhbasini, Roquiah details an incident which occurred in the 1880s. The womenfolk of several respectable Muslim families, on their way to perform Hajj, had reached Kolkata railway station. They were handed over to a gentleman, a relative, who thought it would be best if they waited on the platform instead of the waiting room. He instructed the women, clad in heavy borkhas, to squat down, quickly covered them with a heavy mat, and stood nearby, standing guard over them. An English railway employee approached the gentleman as the train approached. ?Hey, Munshi. Move your baggage,? he said. The male relative replied pleadingly, ?It?s not my baggage. It?s my womenfolk.? ?Ha-ha-ha,? said the employee, as he kicked the one nearest, ?Move your baggage, I said.
??Roquiah concludes, The bibis did not utter a single word for fear of breaking their vow of porda.
Another incident: a Hindu wife had gone with her mother-in-law and her husband to the river Ganges to bathe in its holy waters. On her way back, she lost them in the crowd, mistook another man for her husband, and began dogging his footsteps. A police constable stopped the man and accused him of luring away another man?s wife. Flabbergasted, he turned around, Whaaat! Who is she? This is what the wife replied: since her head had always been covered with a long ghomta, she had never taken a good look at her husband?s face. Her husband had been wearing a yellow dhuti, since this man too wore one, she had thought he must be her husband.
To persuade reluctant parents to permit their daughters to be educated, Roquiah often made use of arguments which later percolated to become middle-class common sense: educated women make better mothers. In ?Ordhangi?, (Motichur, vol. 1, 1905), Roquiah cites an instance in a footnote, that she had read of in a magazine:
Because of rote education, boys may gain FA, BA degrees but their minds revolve in the kitchen with their mothers. If you were to test their knowledge, you would be likely to hear this.
Question: When was Cromwell born?
Answer: In the year 1649 when he was fourteen years old.
Question: Describe his continental policy.
Answer: He was honest and truthful and he had nine children.

ALTHOUGH a strong advocate of women?s education, Roquiah knew that mere education would not be enough to emancipate women. Unlike Bangladeshi liberal feminists (then and now), Roquiah did not assume that mere access, with its ?physical connotations?, approaching, entering, using, represented metaphorically as passages through doors and gates, over obstacles, barriers, and blockages, measured quantitatively, based often enough on ?a mechanical model for change? (Joan Scott), would be the solution.
In the workplace, men?s labour is worth more than women?s, wrote Roquiah. Where men in lowly jobs earn Tk 2, women earn Tk 1 (Rachanavali, p 30). Neither has the dismantling of seclusion led to freedom from mental enslavement. Citing the case of Parsi women, she wrote, they have left porda, but a mere imitation of western, civilised mores will not necessarily instil life into those who are lifeless, will not ensure that women will make use of their own intelligence and judgement (p 36). Opportunities for education exist in Christian societies, but one does not see women asserting themselves to the fullest. Husbands and wives are each other?s companions but women have been taught to be fair and slender poems, not to understand the prose and tribulations of the material world (p 40).
Other ideas spill out in her writings, ?The labour that we expend in our husband/owner?s home, can we not apply that in a free trade?? Women may be physically weak but strength alone does not determine who will rule, or else, elephants would have ruled men. We need men?s assistance, but that does not mean the right to rule. Rivers depend on clouds for rain-water, lawyers need doctors and vice versa, but surely one does not ?own? the other (shami bolibo?).
Ideas that speak of roles imagined for women which are not primarily that of wife, or homemaker. But of being human. Social. Free of mental enslavement.
First published in New Age on Monday 14th December 2009