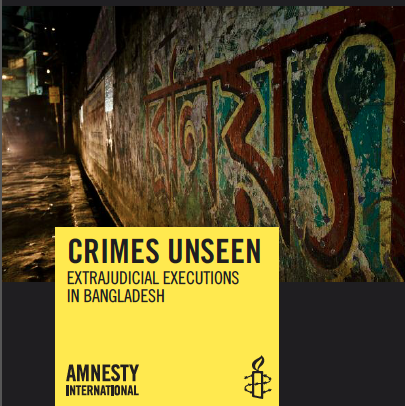 Bangladeshi journalist Masum Fakir was arrested and tortured by the RAB?? Masum Fakir

The Bangladesh authorities must honour their pledge to stop extrajudicial executions by a special police force accused of involvement in hundreds of killings, Amnesty International said today in a new report.
Crimes unseen: Extrajudicial executions in Bangladesh also documents how the Rapid Action Battalion (RAB) justify these killings as accidental or as a result of officers acting in self-defence, although in reality many victims are killed following their arrest.
?Hardly a week goes by in Bangladesh without someone being shot by RAB with the authorities saying they were killed or injured in ?crossfire? or a ?gun-fight?. However the authorities choose to describe such incidents, the fact remains that they are suspected unlawful killings,? said Abbas Faiz, Amnesty International?s Bangladesh Researcher.
The RAB has been implicated in the killing of at least 700 people since its inception in 2004. Any investigations that have been carried out into those killed have either been handled by RAB or by a government-appointed judicial body but the details of their methodology or findings have remained secret. They have never resulted in judicial prosecution. RAB has consistently denied responsibility for unlawful killings and the authorities have accepted RAB claims.
?It is appalling that virtually all alleged instances of illegal RAB killings have gone unchallenged or unpunished. There can be no justice if the force is the chief investigator of its own wrong-doings. Such investigations cannot be impartial. There is nothing to stop the RAB from destroying the evidence and engineering the outcome,? said Abbas Faiz.
Former detainees also told Amnesty International how they were routinely tortured in custody, suffering beatings, food and sleep deprivation, and electric shocks.
At least 200 alleged RAB killings have occurred since January 2009 when the current Awami League government came to power, despite the Prime Minister?s pledge to end extrajudicial executions and claims by the authorities that no extrajudicial executions were carried out in the country in this period.
In addition, at least 30 people have been killed in other police operations since early 2010, with the police also portraying them as deaths in ?shoot-outs? or ?gun-fights?.
?By failing to take proper judicial action against RAB, successive Bangladeshi governments have effectively endorsed the force?s claims and conduct and given it carte blanche to act with impunity. All we have seen from the current government are broken promises or worse, outright denial,? said Abbas Faiz.
In many cases the investigations blamed the victims, calling them criminals and portraying their deaths as justified even though available public evidence refuted that.
?The Bangladesh authorities must act now and take concrete steps to protect people from the alleged unlawful killings by their security forces .The government must ensure independent and impartial investigations into all suspected cases of extrajudicial executions and bring those responsible to justice.?
Bangladesh?s police and RAB continue to receive a wide range of military and police equipment from overseas, including from Austria, Belgium, China, Czech Republic, Italy, Poland, Russia, Slovakia, Turkey and USA. In addition, diplomatic cables from the US Embassy in Dhaka, obtained and released by Wikileaks in December 2010 alleged that UK police had been training RAB officers.
Amnesty International calls upon these countries to refrain from supplying arms to Bangladesh that will be used by RAB and other security forces to commit extrajudicial executions and other human rights violations. Any country that knowingly sends arms or other supplies to equip a force which systematically violates human rights may itself bear some responsibility for those violations.
RAB was created in March 2004, to much public acclaim, as the government?s response to a breakdown in law and order, particularly in western and central Bangladesh.
In Rajshahi, Khulna and Dhaka districts, armed criminal groups or powerful mercenary gangs colluded with local politicians to run smuggling rings or extort money from local people. Within months of its creation, RAB?s operations were characterized by a pattern of killings portrayed by the authorities as ?deaths in crossfire?, many of which had the hallmarks of extrajudicial executions.
They usually occurred in deserted locations after a suspect?s arrest. In some cases, there were witnesses to the arrests, but RAB authorities maintained that victims had been killed by ?crossfire?, or in ?shoot-outs? or ?gunfights?.
Bangladesh?s two main political parties ? the Bangladesh Nationalist Party and the Awami League ? have shown no commitment to limiting the powers of RAB.
In the first couple of months of coming to office, the Prime Minister spoke of a ?zero tolerance? policy toward extrajudicial executions. Other government authorities repeated her pledge. These hopes were dashed in late 2009 when the authorities, including the Home Minister, began to claim that there were no extrajudicial executions in the country.
Related links:
An exhibition on extra judicial killings by Shahidul Alam
Guardian report on torture by MI5 in collaboration with RAB
Rahnuma Ahmed’s column on the shooting of Limon Hossain by RAB
Amensty’s Abbas Faiz on RAB impunity
Rahnuma Ahmed’s column on militarisation and the women’s movement
Rahnuma Ahmed’s column on the ‘death squad’
Guardian article on ‘death squad’ being trained by UK Government
Guardian claim of Briton being tortured in Bangladesh
Representing “Crossfire”: Politics, Art and Photography