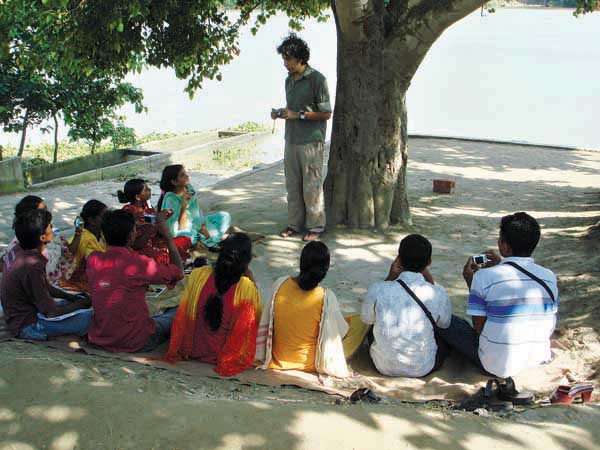 Practical session under a banyan tree on the banks of the river Mahananda, Chapainawabgonj. ? Reza/Drik

?Kamera tulen?. Elsewhere, one would think a hundred times before pointing a camera. Permission, legality, issues of representation, all came into play. In any Bangladeshi village, getting people out of your lens is the problem. A cluster of heads surround the LCD. Peals of laughter. Old toothless smiles, a little baby held up so she can see. The disappointment of being left out. There might be serious issues to be dealt with, but right now being photographed was all that mattered. 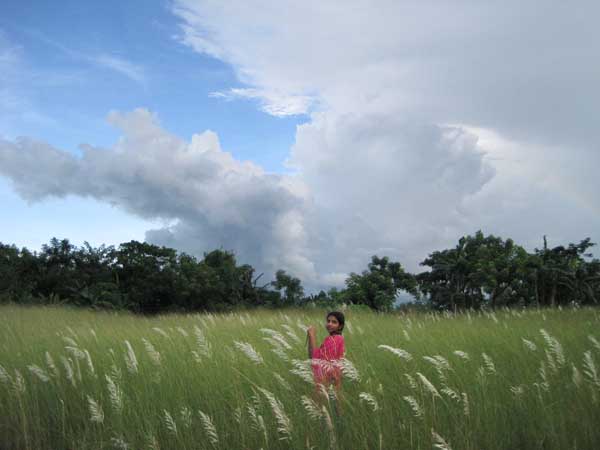 Fourteen-year-old Rabeya, a member of our adolescent group, was taking photos in this beautiful location. I want everyone to live in such a beautiful environment. Jamalpur, 2009. ? Fatema Akter Hasi; 14 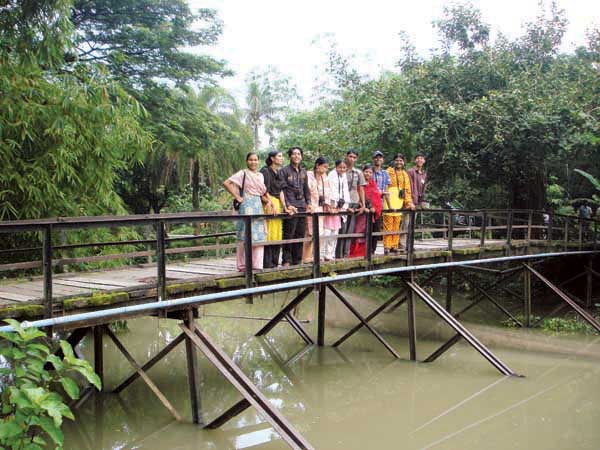 
With every intervention, one has concerns. Entering people?s lives, creating expectations, making friends, all have to deal with the disengagement that follows. It was people you were dealing with. How do you walk out of a life you have changed, perhaps forever? What do you leave behind, how much do you take away? These were difficult questions and we didn?t really have answers. But we?d tried it before, in cities and in villages. The remarkable transformations it had made to some children?s lives made the risk worth taking. 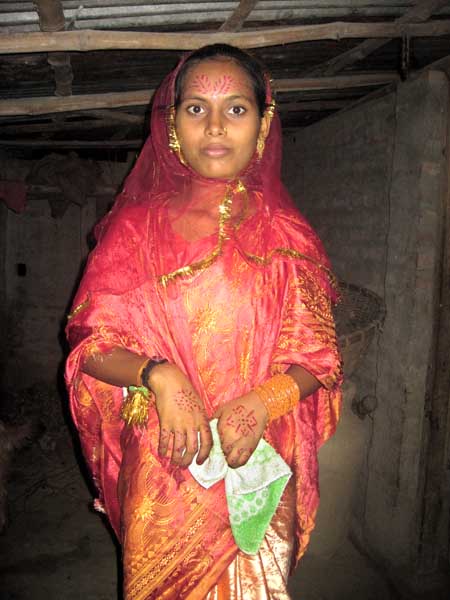 This is Shorifa Begum on her wedding day in Taherpur. She is a bride at eighteen years old. Shorifa did not want to get married. She stopped her education because she could not afford to continue it. Then her mother forced her to get married to a man who agreed to have a cheap wedding ceremony. Chapainawabgonj, 2009. ??Morium Khatun; 16 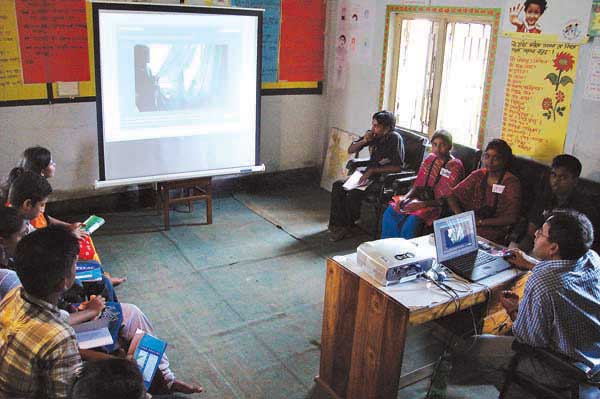 There were aesthetic concerns too. In talking of composition, rules of thirds, moments, balance, were we suppressing their spontaneity? Did we impinge upon their way of seeing? Were we erasing their natural ability to tell stories? We needn?t have worried. Sure, they tried things out. Pictures were created with remarkable composition. Balanced frames with well-placed elements formed stylised images that a trained photographer would have been proud of, but we had underestimated their instincts. Our fears of over intrusion were unfounded. The most striking images resulted not from our training, but because they had a voice. They could now tell their own stories and no one was going to get in their way, not even their teachers. The proud, chest-out, stiff at attention pose, that thwarted every photographer looking for something ?natural? was very much part of that expression. The loud coloured d?cor that would embarrass the urban genteel, was shown off with panache. Quirky images of everyday scenes, seen the way only children see, were the nuggets that glittered through our light box. 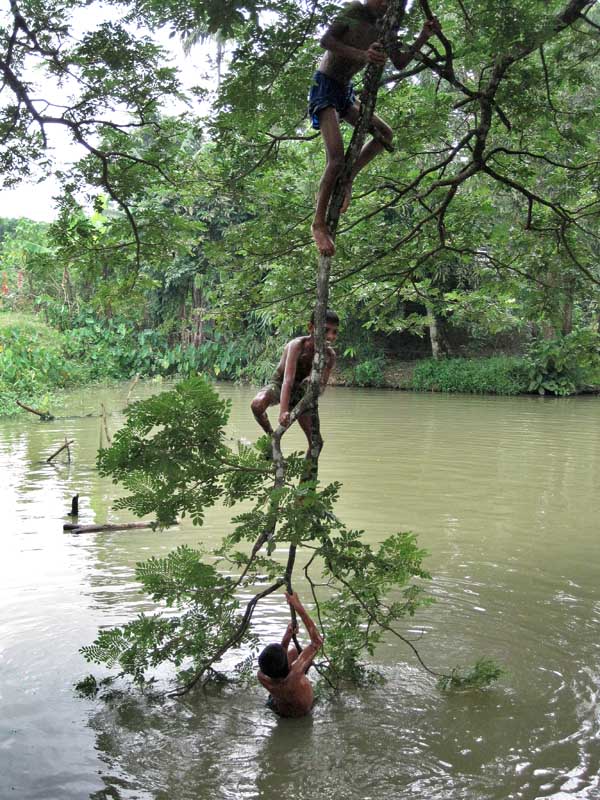 A group of children play in a local pond by climbing onto the tree and jumping into the water. They don’t go to school as their fathers are rickshaw pullers and do not earn enough to educate them. The parents are also not fully aware of the value of education. Barguna, 2009. ??Mohammad Jashim Uddin; 18 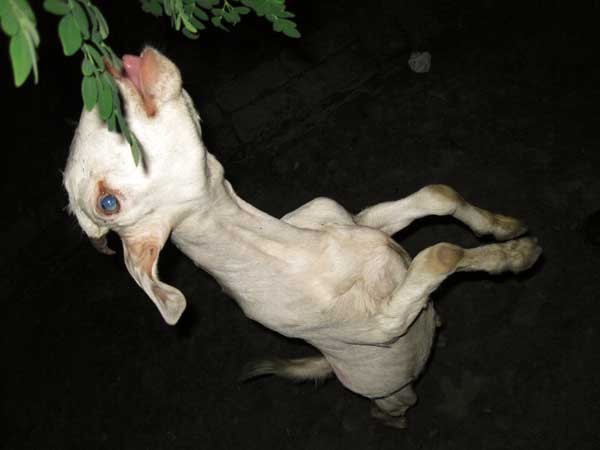 This is my uncle Shahidul’s goat. Every evening my uncle plays with the goat by holding up a leafy branch for him to jump up and eat. I watched this and took a photo. I also think that if the goat could become a human, then it might not need to jump like this. Chapainawabgonj, 2009. ? Md. Sala-uddin Ahmed; 16

There were quiet reflective moments too. Their realities, the every day challenges, the matter of factness with which they dealt with hurdles, had an immediacy that would humble a trained professional. Layered between romantic images in fields of Kash, looming clouds over flowing rivers, coiled branches silhouetted against stormy skies, were photographs that talked of strife. People less able who insisted on being able. Children longing to be children. A much too young bride. Another young mother to be, gingerly treading through a treacherous path. Absent are the images they were not allowed to show. That threatened a patriarchal society?s image. Pictures they had been forced to delete. Pictures they had staged, as their reality was being suppressed. To delete, to stage, to deal with censorship. These are things they hadn?t been taught. They were learning on the fly. Dealing with situations as best as they could. They were coping with life. Perhaps the ultimate lesson.
Shahidul Alam
Dhaka 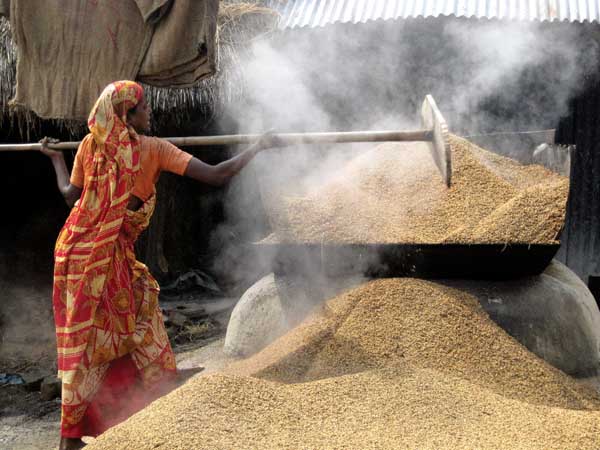 This woman is removing paddy from the basket after it is boiled. She keeps her feet on a jute bag so that they don’t get burnt. Barguna, 2009. ? Tania Islam Jhuma; 14 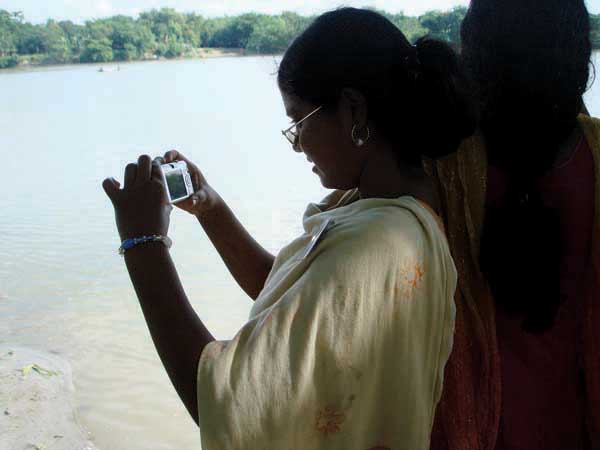 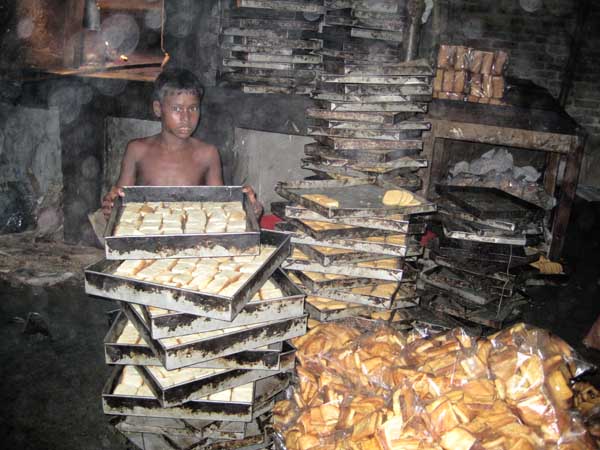 Sohel, 12, lives in Nandina and works in Mostafa Bakery making biscuits and other snacks. He helps his family with his daily wages. It amazes me that a young boy like Sohel has to work for a living instead of going to school. I do not want any child to work for a living. We have to create awareness among people about child labour. Jamalpur, 2009. ? Md. Amir Hossain Apon; 14 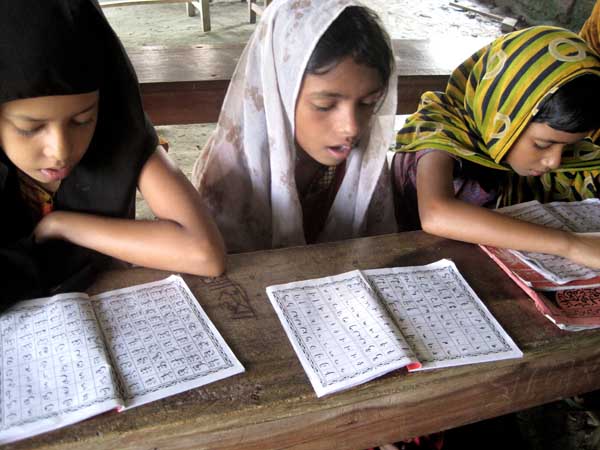 7 thoughts on “Coping With Life”