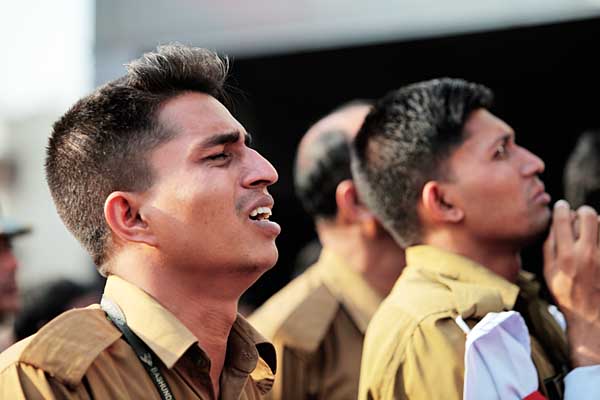 Shards of glass and charred window frames lie scattered across the pavement. The burnt out front page of an exercise book blows gently in the breeze on the footpath below. And thousands of imploring faces look anxiously above as flames lick the top three floors of Bangladesh?s biggest shopping mall with thick black clouds of smoke furiously bellowing out.
It?s just over a fortnight since the bloody rebellion at the headquarters of the Bangladesh Rifles shook the country. Now, the television channels are rolling again with hours of news. This time, it?s footage of the devastating fire engulfing Basundhara City that flashes on the screen, with the tragic news that security guard Baki Billah has died of multiple burn injuries. A further 17 people are being treated in Dhaka Combined Military Hospital.
Nearly two hundred firefighters battle against the flames, trying to reach the towering inferno from a hoist, adding to their water supplies from the fountains outside.
Once again, troops are back on duty. A green army helicopter winches a survivor to safety from the verandah on the 17th floor, while on the ground, soldiers try and control the crowds growing outside.
Down below, a worker from the 12th floor cried with grief. “It’s all gone, it’s all gone. I had kept my files, my valuables here in case they were stolen from the house. They were here for my safety. Now it will all be finished.”
Others plead with firefighters to be allowed up on the hoist to try and put the fire out themselves. “If they put us up there, we could have put water. Hurry up, hurry up!”
Several hours of hard graft, and it appears the firefighters are able to bring the blaze under control, after it has spread from the 20th to the 12th floor and the back of the building.
?I am worried about Bangladesh,? rickshaw driver Mahmud says. ?All those people killed at BDR, and now this fire. It is not good for the country.?
The owners of Basundara City, opened in August 2004, claim it is South Asia?s largest shopping mall, and the 12th biggest in the world. It?s a twenty storey building, with more than 2,000 retail outlets and cafes. Normally, around 5,000 workers are expected to work in the building, a sizeable number in the top three floors of corporate office space.
The cause of the fire is yet to be established. The government has already convened a three-member committee to investigate, led by joint secretary to the home ministry Abdus Sobhan Sikder.
But one thing is for sure, and that is the sense of relief that it?s a Friday, when offices are closed. Meanwhile, the teams of fire-fighters carry on with dedication and diligence, working late into the night to rescue what they can of the most iconic of Dhaka?s sprawling shopping malls. Resilience, once again, kicks in, leaving people safe in the knowledge the flames will be extinguished before long.
Still photographs and videos
Moniruldiary