Date & Time: 12 February, 2012 from 11am to 1pm
Venue: Jatiya Press Club, Dhaka (Conference Room)
The programme will also be online live at www.drik.tv
History, at least in its initial form is generally written by the victor. But who is the victor in a war? How does one value a memory? What purpose does an artifact serve? Each archive is unique; its character shaped on those who set it up, and those who use it. From a photographer?s perspective, the war of 1971 was unique in other ways too. The events leading up to it were documented almost entirely by local photographers. They were themselves caught up in the struggles they were recording. It was not a story that international media neither knew nor was interested in. As such, the immediate aftermath of the crackdown on the 25th March was hardly recorded. For local photographers it was much too dangerous to be out there with a camera. Many of the foreign journalists were locked up in Hotel Intercontinental in Dhaka. It was only the few who managed to sneak out, or film through hotel windows that had tangible records of that fateful night. Others, who recorded those moments, were amateurs who took phenomenal risks in preserving the only visual records of the atrocities. Missing are the subtle nuanced observations. Ordinary people, trying to survive. The euphoria and hope of an expectant nation being replaced overnight by the terror of living under occupation, was a transformation that went unrecorded. 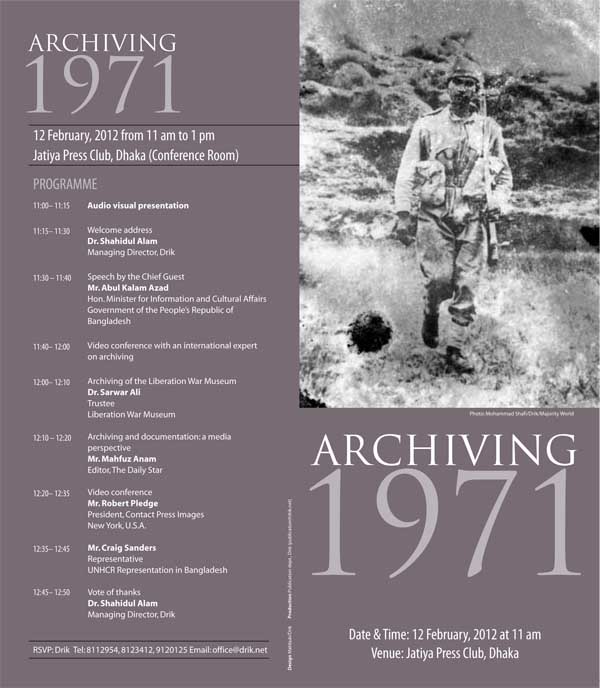 The change came quickly. Local photographers took huge risks to continue to record the atrocities. The who?s who of photojournalism arrived in Bangladesh, through whatever route they could find. They photographed the outward signs of the conflict. The bodies, the exodus, the destruction. Some, like Marilyn Sylverstone of Magnum, also recorded the traces of trauma. 40 years later, we still know little of what happened within the ranks. No visual records remain of the resistance that night. The clandestine meetings, the actions of the high command, the formation of the Mukti Bahini are described in scattered conversations. There are no visual records.
From the early nineties, Drik Picture Library has been collecting, listing, and recording the scattered visual fragments of 1971 as well as oral records, documents and physical artifacts. An initial publication on the 25th anniversary in Drik?s calendar was a product of extensive local research. Through numerous visits to Europe, North America, the Middle East, India and even Pakistan, attempts were made to piece together this scattered history. An exhibition in the first Chobi Mela in 2000, followed by the publication of a book and a film on refugees resulted from rigorous research by an international team. The search continues.
Drik plans to, over the next ten years, put together a team of researchers, social scientists, historians, archivists and other professionals to assemble definitive archives of this important chapter of our history. That plan also involves gathering the material and economic resources necessary to form permanent physical archives that future academics, researchers and other interested people can use to conduct rigorous analysis and to draw inspiration from.
This event is designed to share with the public, what we have been able to achieve, our future plans and to see how we might collectively team up to strengthen this resource.
Programme
11:00? 11:15:              Audio visual presentation
11:15? 11:30:              Welcome address
Dr. Shahidul Alam
Managing Director, Drik
11:30 ? 11:40:             Speech by the Chief Guest
Mr. Abul Kalam Azad
Hon. Minister for Information and Cultural Affairs
Government of the People?s Republic of Bangladesh
11:40 ? 12:00:             Video conference with an international expert on archiving
12:00? 12:10:              Archiving of the Liberation War Museum
Dr. Sarwar Ali
Trustee
Liberation War Museum
12:10 – 12:20:              Archiving and documentation: media perspective
Mr. Mahfuz Anam
Editor, The Daily Star
12:20-12:35:                Video conference
Mr. Robert Pledge
President, Contact Press Images, New York, U.S.A.
12:35? 12:45:
Mr. Craig Sanders
Representative, UNHCR Representation in Bangladesh
12:45-12:50   :             Vote of thanks
Dr. Shahidul Alam
Managing Director, Drik