DHAKA, Bangladesh ? As global migration has rapidly expanded, so has the influence of a little-known group whose eclectic work shapes migrants? lives across six continents.

Here in Bangladesh it has staged folk dramas to warn against sex trafficking, put solar panels on a remote border post and rescued tens of thousands of Bangladeshi workers caught in the Libyan war, at times with daring sea ventures that defied rocket attacks.

Part research group, part handyman crew, the International Organization for Migration has become the who-you-gonna-call outfit for 132 member countries grappling with the surge in migration, both legal and unauthorized. Its rapid growth is a sign that migration has outgrown most countries? ability to manage on their own. ?I haven?t made it to a country yet where migration hasn?t been high on the list of priorities,? said William L. Swing, the director general.
Yet even as its duties grow, the group operates under tight constraints that reflect the special worries migration can arouse. The United States and other rich donors largely dictate its agenda and ensure that it does not erode their power to decide which migrants they admit and how many.
?It helps them bring in the people they want and keep out the people they don?t,? said Joseph Chamie, a researcher at the Center for Migration Studies in New York.

To understand the group?s rapid growth and varied duties, consider Bangladesh, where the $10 billion that migrants send home accounts for 13 percent of the economy ? making the export of people nearly as vital as the export of shirts. But migrants borrow heavily to finance their trips, and the labor recruiting industry is rife with scams. 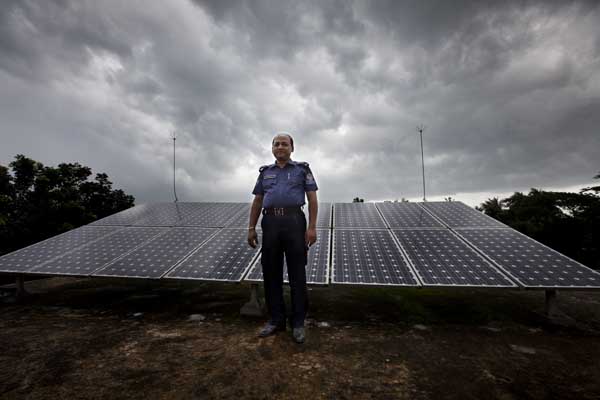 Since Bangladesh joined in 1991, the organization has sponsored dozens of projects to promote its goal of ?managed? migration. It put microscopes in the Dhaka airport to detect passport fraud. It helped start an orientation program for departing workers. And it helped write a new antitrafficking law.
?On every issue they are helping us,? said Kazi Kalam, deputy secretary of the Ministry of Expatriates? Welfare and Overseas Employment, which the migration group helped create.
Among the workers it returned from Libya this spring was Shofiqul Islam, 35, who described the migration group as a rare source of help in a disturbing two-year odyssey. He paid $5,000 to a recruiter who sent him to Libya without the promised job. The recruiter?s accomplices tried to sell him into forced labor. Even after he escaped, the Libyan police demanded bribes to overlook his invalid visa. Then came the bombs.
When Mr. Islam reached the Tunisian border, the migration group offered shelter, a plane ticket to Dhaka and fare for the overnight bus home. With just enough change to avoid the shame of returning empty-handed, he bought his two children each an apple. ?I?m very grateful,? he said.


The migration group was formed in 1951 under a different name to resettle Europeans displaced by World War II. It had plans to quickly disband, but migration kept growing. Starting in the 1970s, it helped resettle 1.5 million Indochinese refugees, and brought home 218,000 workers during the first Persian Gulf war. In the past two decades, the group has added 89 member countries and undertaken increasingly varied work.


Canada tapped it to recruit meatpackers. Britain used it to screen would-be migrants for tuberculosis. The United States used it to run a jobs program in Haiti, deterring Haitians from illegally immigrating.
?If the range of our activities has expanded, it?s because migration has taken on much more importance in our globalized world,? said Gervais Appave, a senior official at the group?s headquarters in Geneva.
But the movement of people causes more concern than the movement of money or goods, and Western powers are unwilling to cede authority to an international group. While the World Trade Organization can define unfair trade practices, the migration group cannot define unfair migration policies. It cannot say who has the right to migrate or what rights a migrant should have.


Virtually all its work is financed on a project-by-project basis, giving donors control. Together, the United States and Europe provide half the $1.4 billion budget, and every director has been American.
While much of the Bangladesh work is called ?capacity building,? it can show how limited poor countries? capacity can be. Bangladesh has six labor attach?s in Saudi Arabia to oversee 2.2 million workers. Its ?market research unit,? which is trying to find new jobs, is essentially two people relying on the Internet.
Multimedia
?Don?t picture something sophisticated,? said Rabab Fatima, who runs the migration group?s Bangladesh office. She praised the government of Bangladesh for seeing a need to do more but said ?the structures that should be serving this sector don?t exist yet.?
While events during the war in Libya showed the migration group at is best ? quick to mobilize and deft in moving large populations ? human rights groups have sometimes accused it of pressuring people to return to dangerous situations.
Human Rights Watch criticized it in 2007 for bringing home Iraqis being held in a Lebanese jail after fleeing the war. While the migration group said the Iraqis were returning voluntarily, critics said their choice ? indefinite incarceration or return to a war zone ? amounted to coercion.
Sufiur Rahman, an official in the Bangladesh Foreign Ministry, said the group spent more time restraining migration than expanding legal channels, which he said reflected donors? concerns. He urged it to stress the ?mutual benefits? for countries at both ends.
One man who got little help leaving, but much in coming home, is Kazinazrul Islam, 52, who recently returned from 12 years in Britain. He had always pictured the country a ?dreamland,? but had no way to get a work permit. He flew there and sought political asylum, citing harassment from Bangladeshi politicians.
While he expected a quick decision, the case languished for more than a decade, and his children, entering adolescence, viewed him as a stranger. Earlier this year, Mr. Islam dropped his claim, and joined a return program run by the migration group, with money from the British government, which is eager to trim its asylum caseload.
It gave him a plane ticket home, $800 in cash and $1,600 toward a business ? in his case, a tiny shoe store. Uncertain the store can support him, Mr. Islam is thinking of going abroad again, perhaps to the Middle East. But he thanked the migration group.
?They stood by me when I was in trouble,? he said. ?They could have just said, ?Go home.? ?