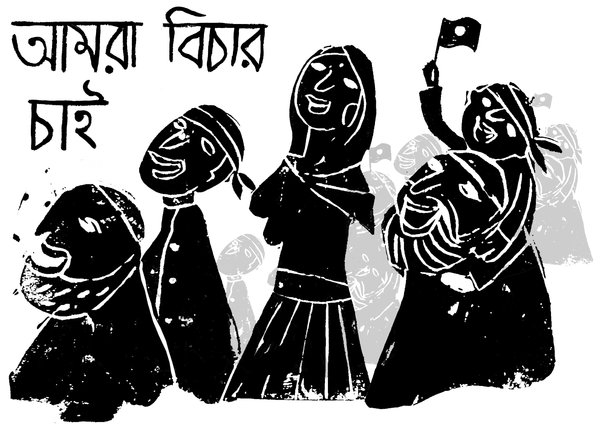 FOR the past month, tens of thousands of Bangladeshis have filled Shahbagh Square here, demanding justice for crimes committed in 1971, when Bangladesh (formerly East Pakistan) attained its independence from Pakistan.

Ordinary people, grandparents, people in wheelchairs, men with beards, women in hijab, teenagers in jeans, have come out in throngs, in anger, but also in joy. Children are decked out in their favourite clothes, sitting on the shoulders of parents chanting slogans they don’t understand. Women have been able to participate safely, free from the harassment that often accompanies large crowds of angry men.

The year 1971 was seminal for Bangladesh. We had been denied our right to self-rule since the Indian subcontinent was partitioned in 1947. In March of ’71, the Pakistani military, supported by China and the United States, initiated a bloody suppression of 75 million Bangladeshis. Millions fled the murderous onslaught and sought refuge in India.

Militias affiliated with the Islamist party Jamaat-e-Islami collaborated with the Pakistani military. They informed on, hunted out, and participated in the rape, killing and torture of ordinary citizens. They targeted hundreds of intellectuals, who were killed in cold blood.

After Bangladesh achieved independence, with help from India, in December 1971, the new government promised to punish the razakars, or collaborators.

We all knew who they were. But realpolitik in a young nation surrounded by powerful neighbours inevitably led to compromises. Bangladesh’s founding leader, Sheik Mujibur Rahman, set up special tribunals to try the collaborators. Several thousand cases were filed, but the quest for justice was derailed in late 1973 when Sheik Mujibur declared a general amnesty for the collaborators against whom trials had not yet been initiated. Two years later, he was assassinated, and a series of military coups followed.

Bangladesh’s original Constitution had four basic principles: nationalism, democracy, socialism and secularism. Military dictators replaced that with ‘absolute trust and faith in the Almighty Allah as the basis of all actions’ in 1977, and made another change in 1988 that led to our once-secular nation being redefined as an Islamist one. Martial law, amnesty and political deals allowed the collaborators to go free and Jamaat-e-Islami to gradually rejoin the political mainstream.

Only in 2010 was a tribunal at last established to investigate the 1971 war crimes. It delivered its first verdict last month, sentencing a former Jamaat member, Abul Kalam Azad, to death. In a second decision, on Feb. 5, it sentenced a top current Jamaat leader, Abdul Quader Mollah, to life in prison, a sentence the protesters regard as far too lenient.

The demonstrators suspect that the life sentence is part of a secret deal the current prime minister, Sheikh Hasina Wazed (a daughter of the nation’s assassinated founder) has made with Islamist leaders to preserve her power.

Jamaat belongs to an opposition coalition led by the Bangladesh National Party. There is widespread fear that if a new government comes to power in approaching parliamentary elections, it will pardon Mr. Mollah, Mr. Azad and other Jamaat members still facing trial allowing the collaborators of 1971 go free once again. The current government has set a dangerous precedent: Since 2009, Ms. Hasina has pardoned some 20 death-row convicts, including hardened criminals charged with grisly murders.

Most of the young protesters in Shahbagh Square never lived under occupation or experienced the terror of midnight raids or the fear of rape, torture and wanton killing. But they are furious over government duplicity.

Years of kleptocratic rule, nepotism, corruption and abuse of power have eroded trust in government in Bangladesh. People feel that the system is so corrupt that change cannot possibly emerge in the electoral arena. That’s why hundreds of thousands of Bangladeshis have gathered in the past month in a spontaneous movement that quickly spread across the country.

On Feb. 15, Ahmed Rajib Haider, a blogger and one of the organizers of the protest movement, was murdered. His throat was slit, his body mutilated, trademarks of Jamaat’s student wing. The protests swelled with anger and grief, but Shahbagh did not erupt into a frenzy of revenge. There were those who felt we were being naive, that an eye for an eye was the only answer. But this was a gentle crowd prepared to resist, but not to imitate.

Since then, there has been more violence. On Thursday, the protesters in Shahbagh rejoiced after the tribunal announced a death sentence for another Jamaat leader, Delawar Hossain Sayedee. Jamaat members have retaliated violently, leading to bloody clashes across the country.

Young kids baying for blood will make many justifiably uncomfortable. And no court should be forced to alter a verdict because of popular pressure.

But the protests in Shahbagh must be seen as more than a demand for blanket death sentences. They are also a democratic outcry, demanding that justice finally be done and an attempt by a nation to wrest control from failed leaders who have consistently put personal profit over national interest. The protests represent the spirit of 1971 and a bigger war that is yet to be won.