Sarah Harbutt was the director of photography of Newsweek and a fellow jury member of World Press Photo in 2003. Her passion for photography was contagious.

This 10-week workshop aims at producing new stories based on participants’ ideas. The workshop will focus on both guiding your proposed stories/projects towards completion as well as exploring current opportunities in which to market work.?Each participant will present a brand new (meaning – something you are about to start working on, and not the work in-progress) story/project idea (a p >>

This workshop will focus on photographers who want to begin a new project. However, the emphasis will be placed on aspects usually forgotten by documentary photographers and photojournalists: the written proposal, and the final editing. Each workshop participant will be asked to research and pitch an idea to the master, who will act as ‘gatekeeper’ or editor with final say before a parti >>

The purpose of the workshop is to develop a small portfolio of images (plus statement) that the participants can later expand on their own.There are many types of economic hardships, in many different countries, caused by different reasons. Each workshop participant is invited to find her or his own particular focus, to build a sold concept around the focus, and to then go out and take images. T >>

REDO PAKISTAN invites artists & writers from around the world to engage with the history and futures of South Asia to envision imaginative and fictive solutions for the troubled nation of Pakistan. Installed as a mock symposium and newspaper stall, the project has travelled Pakistan, London and New York. The project operates as a nomadic production line, generating new art work, film events, performance, writing and critical discussion in relation to its new contexts and journey. The 2010 edition is based on an open call based on a line from the Pan-Islamic philosopher and national poet of Pakistan, Allama Iqbal: Declaration of War Against the Present Times. The scenario of a mock call to war frames the presentation and production and is the focus of the artists submissions.
Curators Fatima Hussain and Hamja Ashan will discuss the project on the evening. It will be the exclusive launch of the second edition of REDO Pakistan, kicking off a series of events around the UK. Artists involved include:
Sana Arjumand, Damon Kaworski and Shezad Dawood amongst many others.
Tuesday 24th August
6 – 9pm
RSVP
FACEBOOK EVENT:
ATTACHED PRESS RELEASE WITH FULL SERIES OF EVENTS SO FAR.

The video installation Victory Day (2010) was originally conceived as a backdrop for a concert for Bangladesh Independence Day, featuring the reformed Asian Dub Foundation and State of Bengal. Composed from entirely original footage, the video was shot in Dhaka during the Victory month where the war of independence and final surrender from Pakistani army on 16th December is celebrated over an entire month. The work is a poetic mediation on how the spirit and aspirations of nation-building and resistance is embodied in rituals, monuments, folk songs, gatherings and national holidays. The work features footage from the South Asian football cup hosted in Bangladesh that year and Lalon Fakir Baul festival at Shiplakala National Arts academy. The composition ends with footage from the Bishwa ljtema – the world’s largest Islamic gathering after Hajj that takes place in Dhaka by the river Tongi each year.
An additional video piece features a conversation with Shahidul Alam – the legendary Bangladeshi activist, photographer and founder of Chobi Mela/DRIK Photography agency. This is a part of a series of critical conversations on the politics of representation, inclusion and exclusion produced by Other Asias www.otherasias.com – Hamja Ahsan and Fatima Hussain’s tansnational artists and writers’ organisation. Another work, 71 Signs for a Nation was shot in Chittagong (the port city where war of Independence was declared) and Dhaka, featuring journalists, security guards, rickshaw drivers, DRIK photography agency, artists including, Porapara artists collective, actors and actresses on their hopes for the nation. The work ends with a demonstration from the Chittagong Hill Tracts tribal people locked in an insurgency for autonomy with the Bangladeshi government.
Additional editing and composition on Victory Day by Riffat Ahmed, a previous ENTER artist at Watermans Art Centre and part of Other Asias video production collective.
Hamja Ahsan (b.1981) is an artist and independent curator of the Bengali-Islamic diaspora, based in London.
Ahsan’s practice ecncompasses the entire span of media: drawing, sound, painting, appropriated text work, sculpture, photography, performance, video, directing exhibitions and critical writing. His thematic concerns as an artist revolves around post-colonial history, diaspora politics, indexing time, the prison system and new formations of Imperialism.
He has previously presented projects at Tate Britain, The Guild Gallery (New York), Deptford X, Shanaakht Festival (Pakistan), Shiplakala Academy (Bangladesh) and across artist-run spaces. He is the co-ordinator of Other Asias – an artists-run organisation of 10 interweaving curatorial currents, exploring national and regional representation. He is the co-curator with Fatima Hussain of the REDO Pakistan project – a nomadic art project that circulates through the UK, Pakistan and Bangladesh.
He is currently working on a collaborative archival project with the jazz musician Zoe Rahman, exploring Bangladeshi nationhood as performative identity. His recent work included producing video installation as commissioned media artist for Bangladesh Indepencence Day and performative art writing around Other Asias keywords lexicon for Resonance FM. Hamja is a Chelsea (MA Critical Writing & Curatorial Practice) and Central St Martins (BA Fine Art) alumnus.
DOWNSTAIRS (near theatre -Riverside Gallery NOT upstairs gallery)
TRAVEL: 10 minute overground train from WATERLOO to Kew Bridge – then follow the signs to Watermans arts centre . EASY.
40 High Street, Brent, London.
FACEBOOK EVENT:

To coincide with the exhibition?Exposed: Voyeurism, Surveillance and the Camera, this symposium explores violence as a subject in relation to representations in the broadest range of historical and geographical contexts. It includes international artists, photojournalists and theorists who from their distinctive perspectives will attempt to unveil notions of spectatorship and consumption of violent images in contemporary culture. Key questions will encompass the notion of the political, apolitical or depoliticised spectator of representations of violence; the consequences of these kinds of practice and the difference between photo reportage and art photography.
Presenters:
10:50?Professor John Roberts, writer, critic and curator
11:50?Susan Meiselas photographer
13:30?Dr Alberto Toscano social theorist and philosopher
14:00?Shahidul Alam photographer

Supported by Oxford Art Journal and the Open University

July 22, 2010. 1500 GMT (8am Vancouver, 11am New York, 4pm London, 8:30pm New Delhi)
This session will feature work by photographers that have stayed close to home by documenting their own families. These photographers have each used their cameras as tools to help them document and understand grief and illness, and their work is as much about them as about their family. They will join us to discuss their experiences, and reflect on trying to be a photographer as well as a sister or brother, daughter or son.

* Leonie Purchas “In the Shadow of Things”
* Philip Toledano “Days with My Father”
* Sohrab Hura “Life is Elsewhere”
* Briony Campbell “The Dad Project”
OPEN-i uses Wimba Classroom to host its interactive webinars. Depending on the format of each webinar, there are options to interact with the presenters and other listeners by chat, voice, video, emoticons and voting.
If you can’t make it, don’t worry, all our webinars are archived.
TO JOIN THE LIVE WEBINAR:
For more help visit: 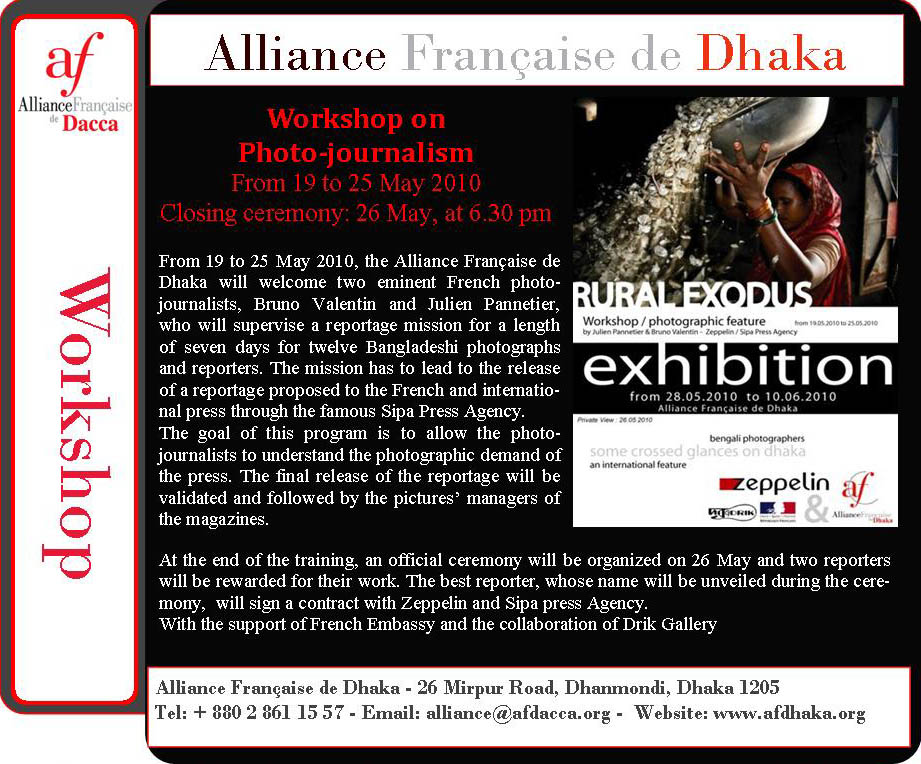 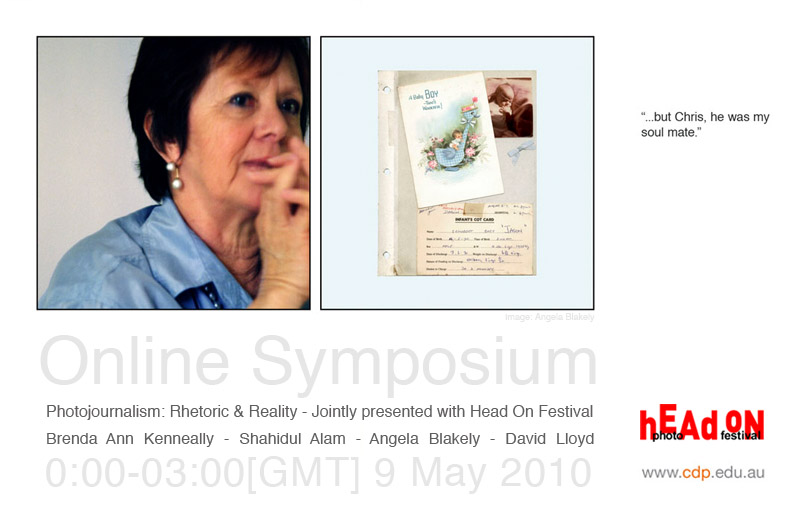 Join us from 00:00 to 03:00 GMT Sunday May 9, 2010 for a live broadcast from the Head On Festival in Sydney Australia where the Centre for Documentary Practice will present a three-hour live event on photojournalism and documentary practice.
?The finest photographers produce images that ought to achieve more than a gut reaction but help us make sense of events, great and small? ? John Pilger
As a discipline, Photojournalism purports to be concerned with a social justice agenda, yet often it simply perpetuates stereotypes, presenting people and issues as singularly dimensional. ?Presented by the Centre for Documentary Practice, this seminar will focus on the distance between the rhetoric and reality of journalism today.
The event will feature three exemplary storytellers ? Angela Blakely (Australia), Shahidul Alam (Bangladesh) and Brenda Ann Kenneally (USA). The session will be introduced and chaired by David Lloyd from the Centre for Documentary Practice.
The 3 hour event will be held from 00:00 to 03:00 GMT. That’s:Sydney: 10:00am – 1:00pm (to be part of live audience in Sydney visit Head On)Bangkok: 7:00am -10:00amDhaka: 6:00am – 9:00amLondon: 1:00am – 4:00amNew York 8:00pm-11:00pm (Saturday May 8)Los Angeles: 5:00pm-8:00pm (Saturday May 8)
No registration is necessary, simply visit www.cdp.edu.au on the day, but if you are not on our mailing list sign-up here.
Regards,
The CDP Team
Centre for Documentary Practice
PO Box 3370
South Brisbane, QLD 4101
Australia 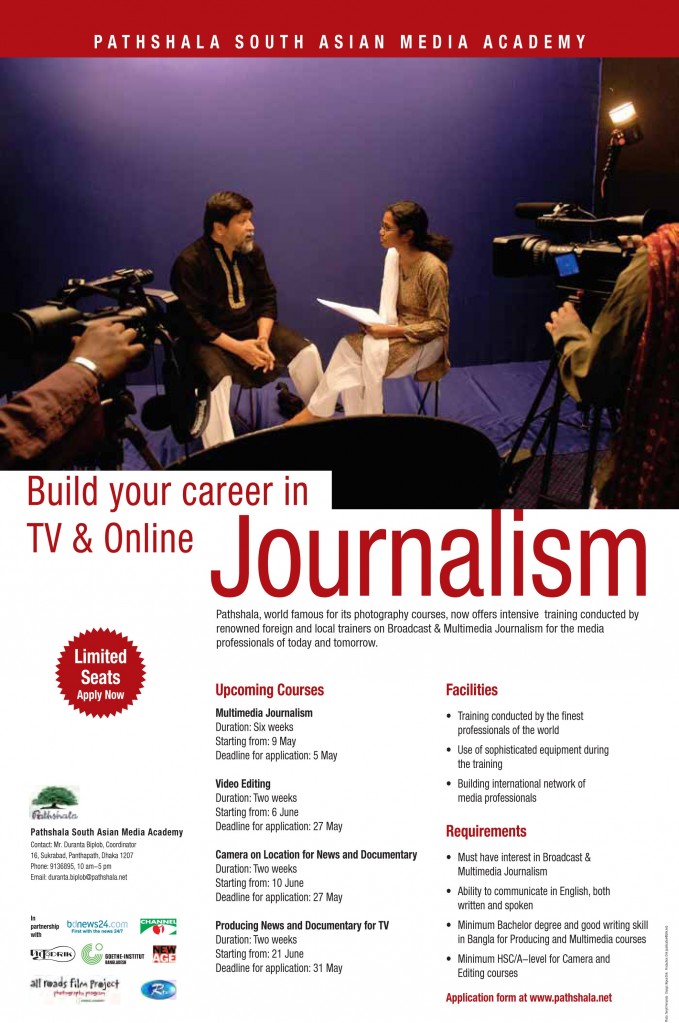