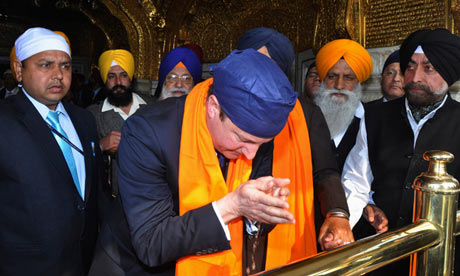 David Cameron at the Golden temple in Amritsar this week. He declined to apologise for the 1919 Jallianwala Bagh massacre, but said we must ‘learn lessons’. Photograph: Munish Sharma/Reuters
On 13 April 1919 a large group of Punjabis protesting against British rule gathered in the Jallianwala Bagh in Amritsar. They were incensed at the arrest of two of their leaders, and for 24 hours the city had been consumed by riots. At five in the afternoon, General Reginald Dyer marched into Jallianwala Bagh with 140 troops, most of them Gurkhas, but with a few Sikhs and Baluchis as well. Having blocked the exits, they fired into the peaceful and unresisting crowds until they had exhausted all their ammunition. Official estimates put the casualties at 379 killed and 1,200 injured. Popular estimates put the casualties as much as 10 times higher.
The massacre was a major turning point for the Indian freedom struggle and, along with Gandhi’s Salt March 11 years later in 1930, was one of the two forces that gave India’s march towards independence its unstoppable momentum. For a generation of Anglophile Indians brought up on British propaganda that British rule was just and uncorrupt, and that it had replaced centuries of arbitrary tyranny at the hands of brutal Muslim invaders, Jallianwala Bagh was a moment of revelation. Rabindranath Tagore immediately gave back his knighthood. The Nehrus were radicalised overnight. Gandhi lost his faith ? intact until that point ? in British justice, and wrote that he had “underrated the forces of evil” in the British empire.
But Jallianwala Bagh was by no means the worst atrocity committed by the British in India. Following the British conquest of Bengal in 1757, the province was left devastated by war and high taxation, then stricken by famine. According to Edmund Burke, the women of Bengal suffered mass rape at the hands of East India Company tax collectors. Certainly the wealth of Bengal rapidly drained into British bank accounts, while its prosperous weavers and artisans were coerced “like so many slaves” by their new British masters, and the markets flooded with British products.
More horrific still were the actions of the British army sent into Afghanistan in 1842 to take revenge for the massacre of troops during the retreat from Kabul earlier in the year. All the villages in its path were looted and torched and the women were raped. When the army got to Kabul the city was deliberately consigned to the flames.
These horrors were merely a dress rehearsal for what followed a decade later across northern India. During the suppression of the Indian uprising of 1857, tens if not hundreds of thousands were slaughtered in British reprisals: in one neighbourhood of Delhi alone ? Kucha Chelan ? some 1,400 unarmed citizens were cut down. Delhi, a sophisticated city of half a million souls, was left an empty ruin, as was Cawnpore (now Kanpur) and Lucknow. These massacres, major war crimes by any standards, make Jallianwala Bagh look a picnic.
Should David Cameron have apologised for all this? While it makes sense for politicians to apologise for their own mistakes, it is surely pointless for them to apologise for the mistakes of others committed long before they were born. For politicians to make apologies for events long in the past can anyway be counterproductive, often looking more like political expediency than genuine contrition. This is particularly the case if you are coming to a country with a delegation from British Aerospace and Rolls-Royce to boost trade, as Cameron was doing to India. When I tweeted the advance rumours of Cameron’s apology for Amritsar, my Indian Twitter followers were united in derision.
What Cameron can do, however, if he feels real contrition for Britain’s past, is to make the teaching of the British empire a compulsory part of the GCSE history syllabus. The empire was, for better or worse, the most important thing the British ever did: it completely changed the shape of the modern world. Yet most British people are by and large completely unaware of the details of their imperial history. My own children learned Tudors and the Nazis over and again in history class, but never came across a whiff of Indian history. This means that they, like most people who go through the British education system, are wholly ill-equipped to judge either the good or the bad in what we did to the rest of the world.
For while there are things the British did that can be celebrated and of which we can be proud ? the incorruptibility of the Indian civil service, the railways, the rule of law, or the laying of the foundations for parliamentary democracies through legislative assemblies and so on ? these have to be weighed against a long succession of terrible war crimes. For we must never forget that whatever its achievements, the British empire, like every empire before or since, was both gained and maintained by military might, and built over a mountain of skulls of those it conquered and defeated.

One thought on “Amritsar Massacre. Cameron in India”