?I want a rickshaw from Bangladesh Mummy, and don?t forget the rickshaw puller too?. This was her trading skills for my missing her cake cutting ceremony on her 6thbirthday yesterday.??She had been all dressed up, poised with cake, candles, knife and family, waiting for me to come on skype and watch her through webcam.??And I was held up at a staff meeting where ?changes? were being debated.??I am so glad that my 6 year old daughter has adapted to changes in her life so quickly and so joyfully and with a zest for life and its challenges that I wish we grown ups had.??She ended the bargain by simply stating ?It?s okay mummy, don?t feel bad. I know how important Drik is to you?.??I must have done something right to deserve children like this.??Because, I almost didn?t.

Six years ago, she nearly died. I nearly died.??Somewhere between stopping the pill and getting a permanent implant, my gyno died. And unknown (ahem) to me, a new life was growing within.??I neglected. I ignored. I didn?t want.??I already had two. I already had a very methodical, routine, life. Two kids in school, me enjoying my part time job, two puppies, one husband.??Life was good.??And then it got complicated.??I jumped into a river from 4 feet high hoping it would go away.??It clung on to me. For dear life.??At five months the new gyno said ?you are bloody complicated, your placenta has moved away from baby, go home stay in bed, put your feet up, get up only to go toilet? ?Ya right? I thought. ?Where were you all my life?? I thought.
I underestimated the complication. The kids I already had thought I was getting uglier by the day. ?You look chubby Mummy. Daddy hates chubby? My husband sat far away from me ? although too late in the day.??The puppies grew up and started eating everything in the house. My complication was eating away my sanity.??By five months I HAD to tell people I was pregnant. Again.??My mother didn?t call me for three days after the announcement. I visualized my father?s jaw twitching in anxiety. ?How are they going to manage?? he would have thought inwardly.??When my sisters called, they asked about everything else except my pregnancy. My brother bought an extra pack of beer cans. For himself.
I wanted to crawl away and hide. I couldn?t. At seven months I bled like kurbani time in Bangladesh. No pain, no warning.??I thought it was over. She stopped moving. For the second time in my life, I feared death. I was rushed to emergency at 3am.??Blood soaked and completely freaked out. Gyno gave me that ?I told you so? look.??He tried a transvaginal scan and the scanner wouldn?t go through.???Serious? he said. Diagnosis??? placenta previa (placenta had dislodged from the wall of the uterus and was now in my birth canal, one push and it will come out with baby still inside).??He turned around and told his team ?prepare her, we need to take the baby out? I held his hands and begged and pleaded to let me stay just one day. The baby was just bordering 7 months. Still too small to be out.??She was below average in growth.??She had not received enough blood. I had siphoned it all out.??I begged and begged.??I had to sign a form saying it was against doctor?s orders and on my own consent that I opted to keep the baby.
That was one long wait for dawn to break.??I wasn?t allowed to move even to change my bloody clothes. The heart monitor picked up her soft rhythm. When all had left and I was alone, I placed my hands on my distorted belly and asked forgiveness from my baby. I pledged to take care of her no matter what.??I prayed for God to equip me to take care of a damaged baby.??That was what the doctor warned me about.??Stunted growth, possible brain damage, handicapped. I prayed that the family will accept this baby unconditionally.??I prayed that God would give me life so that I should be the one to take care of this baby.???I believe that was when the healing took place.??I had fallen asleep.??She started moving again. Her heartbeat picked up and got stronger.
Gyno decided to watch. Yet, would not release me to go home.??I was assigned a medical intern to study my case. I stayed one week.??And in that one week, I made friends with other mothers with the weirdest problems ever.??One was sweeping the garden and the baby fell out of the womb!! She had not even known she had dilated. They brought her in with umbilical cord still attached and a fainted mother. I wheeled myself to her bed and talked to her nights on end.??The baby was in neo-natal and she had no idea of the condition.??I read the reports to her. It weighed only a kilo. No wonder she did not feel it coming out. I got friends to take pictures of the thing in the baby ward and bring it over. It looked like a slightly large beghuni. My case forgotten. Temporarily.
My case is now dancing to the ?Macarena? at 6 years of age.??Complete, wholesome and an energy that keeps the rest of us dancing too.??Her simple reason to things she does is ?That?s why? 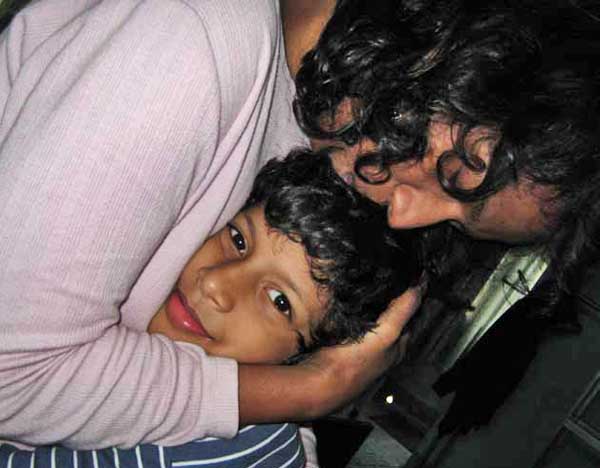