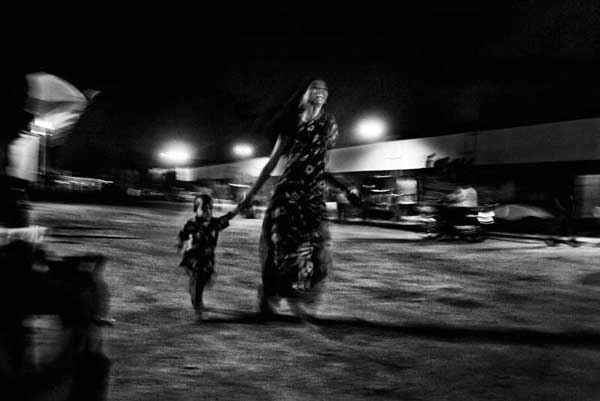 After that, I came to Dhaka in 1990 and I joined a newspaper here. In 2005 I decided that work in the newspaper was not right for me, and I had the opportunity to join Drik and work directly with Shahidul. So I took the opportunity and worked there as a photographer. It was really a milestone, and a breakthrough for me.
ALAM: The agency [Drik] was set up primarily because we were very concerned that countries like Bangladesh, which some have called “third-world countries” and we choose to call “majority-world countries,” have been portrayed almost invariably through a very narrow lens. It worries me that Bangladesh has become in the eyes of many, an icon of poverty. The reality is something we cannot ignore. Shehab shows it through his work and I have no intention of wallpapering over the problems we have. What I do have a serious problem with is when people are denied their humanity and become icons of poverty; they become lesser human beings.
The agency was set up because we wanted to tell stories that got across the richness and the diversity of people’s lives and we realized the story had to be told by people who had empathy for the subject. So it was a platform for local practitioners. And that’s the birth of Drik. But when we started, we realized that a lot of the photography infrastructure a Western agency has acess to, was not available to us. So we started creating some of that infrastructure here. Later on we also began developing educational structures that could foster new talents. We are one of the few agencies in the world that has two galleries of its own, runs a school of photography, and runs its own photography festival; I do not know of a single other agency in the world that does anything of this type. But all of that is really part and parcel of Drik’s photography-philosophy–in telling rich and diverse stories without compromising the subject’s humanity–we just had to create a whole space for ourselves. And now we are telling our own stories.
END_OF_DOCUMENT_TOKEN_TO_BE_REPLACED