The title of my column is somewhat misleading, I think it’s best to state that right away. Intrigued by the press briefings that RAB (Rapid Action Battalion) offices hold every so often where `criminals’ are displayed alongwith crime artefacts laid out on long rows of tables?guns, machettes, grenade-making equipment, stolen cash?as evidence of their criminality, images which are served up on the news of all private TV channels, which are printed a day later in the newspapers, I had thought of conducting research on these photo op sessions. I had wanted to examine these as `sites’ that are organised and arranged by the organs of the state, by the functionaries of the state, ones that construct criminality through visual means, i.e., still photos and video recordings of criminals, their tools, the loot. RAB, for the few who may not know, falls under the jurisdiction of the ministry of home affairs, its members are seconded to the battalion from the army, navy, air force and police, a measure which, according to its critics, eases in the carry-over of its culture of gross abuses and impunity to other parts of the security forces. 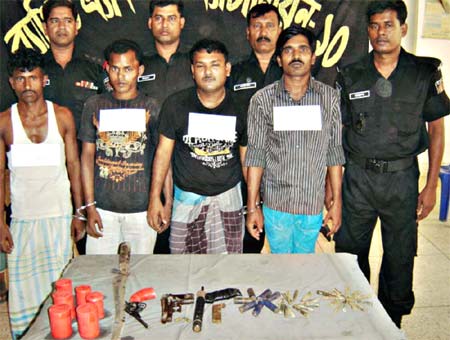