“If Anybody here, came hoping to hear a balanced presentation, then they are going to be sorely disappointed. I say this, because a lot of the things that you are about to hear to night are difficult to hear.”
?Miko Peled is a peace activist who dares to say in public what others still choose to deny. He has credibility, so when he debunks myths that Jews around the world hold with blind loyalty, people listen. Miko was born in Jerusalem in 1961 into a well known Zionist family. His grandfather, Dr. Avraham Katsnelson was a Zionist leader and signer on the Israeli Declaration of Independence. His father, Matti Peled was a young officer in the war of 1948 and a general in the war of 1967 when Israel conquered the West Bank, Gaza, Golan Heights and the Sinai.
Miko Peled, author of The General?s Son, whose father was the renowned Israeli general Matti Peled, speaking in Seattle, October 1, 2012.
Video Posted October 13, 2012

Related piece on use of images by Israeli government for disinformation in Satish Sharma’s blog Rotigraphy
extract:?The art of the past no longer exists as it once did. It’s authority is lost. In its place there is a language of images. What matters now is who uses that language for what purpose.” ~ John Berger

The image supplies little in itself. What counts is its use and the power to fix a particular interpretation of the events, objects or people depicted. Some people, and especially some institutions, have much more clout in this process than others do.” ~ Steve Edwards

By Ahmad Barclay and Polypod, July 2012

Across the Wall: Israeli Settlement Bus Routes which maps the public transport network connecting Israeli West Jerusalem to settlements in the West Bank across the Separation Wall. 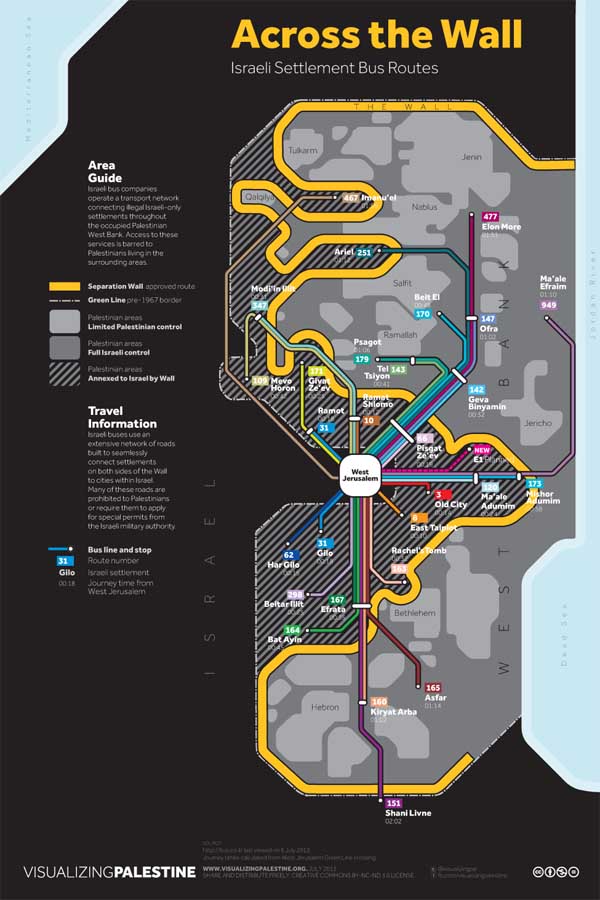 “History cannot be permanently falsified; the myth cannot stand up to the scrutiny of research; the sinister web will be brought into the light and torn to pieces, however artfully it has been spun.”

Cameron made this remark in `Israeli Spying in the US,’ a 4 part Fox News channel series, aired in mid December 2001. The programme contended that Israeli intelligence had advanced information about the September 11 attacks.
It didn’t assert (of course not) that Mossad had `done’ 9/11. As did Dr Alan Sabrosky, former director of studies of the US Army War College, recently.
But that was bad enough. The programme was pulled down from the Fox News website. So was it’s transcript. All references were deleted. No explanation was ever given by Fox.
Career suicide? Hmm, reminds me of how the BBC conveniently lost the original footage, the one where Jane Standley, news correspondent, reports the collapse of Building 7. Wouldn’t have been a problem except for the fact that the building was still standing. The BBC’s news editor dismisses the footage loss casually. No `conspiracy.’ (No destruction of evidence). Just a `cock-up.’
But Israelis have spied on the US. And to top it all, they traded US state secrets with the USSR. Its sworn enemy. Jonathan Pollard, an American of Jewish descent, an intelligence analyst in the US Navy, stole and sold to Israel more than a million pages of classified material. Israel secretly passed on to the USSR those which did America the greatest damage?relating to the US Nuclear Deterrent relative to the USSR. In exchange, emigration quotas for Soviet Jews to Israel were increased. Information about American agents operating within the USSR also found their way to USSR via Israel. After 13 long years of denial, Israel finally acknowledged, in 1998, that yes, Pollard was an Israeli spy. He was a LAKAM (Israeli Scientific Liaison Bureau) agent.
The Pollard affair still rankles among US ruling circles. The US government has declined to release him from life imprisonment?interestingly, he was tried for espionage, not treason?despite repeated public relations campaigns and requests by Jewish Americans. By Israelis. By prime minister Netanyahu himself. “[It is] difficult to conceive of a greater harm to national security than that caused by… Pollard’s treasonous behavior,” said Caspar Weinberger, Reagan’s secretary of defense.
The greatest harm to US national security done by its “closest” ally? By the nation which has,? according to three-fourths of the US Senate, and most? of Congress members, an “unbreakable bond” with the US?words used to describe the relationship in a recent letter addressed to Hillary Clinton, one that has been interpreted as implicitly rebuking president Obama for his confrontational stance towards Israel.
Known as the AIPAC-backed, pro-Israel letter (April 13, 2010), it has created waves of consternation among America’s informed circles: what comes first for our lawmakers? Surely it is the US? Surely it is not Israel?
I myself, as I read and reflect on the unfolding events, am reminded of General Leonid Ivashov’s (former joint chief of staff of Russian Armed Forces) comment: the 9/11 attack was the result of “a clash of interests among US leaders.”
Is the clash finally coming to a head? According to close observers, what is taking place at present is unprecedented. Tony Judt did issue a warning several years ago, “something is changing in the United States”. There has been a sea change, he had said.
?


But how did it get to be this way? How did the American-Israeli lobby?in former Israeli prime minister Ariel Sharon’s words, “We the Jewish people control America” ?(`Jewish’ here is not anti-Semitic, no? Oh good, what a relief)?get to own America? History tells us, it all began with Harry Truman. He had succeeded to the presidency but in the 1948 campaign, he trailed behind. In the polls, in fundraising. His prospects brightened however, after he recognised Israel. A network of Jewish Zionists funded his campaign, gave him $400,000 in cash ($3 million in 2009 dollars)?. It was crucial to his victory.
For those readers who are new to these issues, who have by now become thoroughly confused over the entanglement of religion, race and ethnicity (Jewish), nation, nation-state (USA, Israel), national sovereignty (American), have been wondering whether AIPAC is a national lobby or a foreign lobby, why Sharon had said “we Jewish” and not “we Israelis” control America, which Jewish people he had meant, whether Israeli Jewish or American Jewish, whether by saying “we Jewish” he had implied that the loyalties of both American Jewish and Israeli Jewish people were owed to Israel, not to the US etc., etc., I will just mention another instance from history. In my opinion, a highly significant one.
President John F. Kennedy had insisted that the American Zionist Council (AIPAC’s predecessor, American Israel Public Affairs Committee) should register as a foreign agent under the provisos of FARA (Foreign Agent Registration Act) . His assassination (1963), and later, that of his brother Robert F Kennedy (1968), the attorney general, and also a presidential candidate?somehow led to the order that the AZC should get registered as a foreign lobby, getting buried too. Five years later, the late Senator J. William Fulbright, chairman of the Foreign Relations Committee was heard telling Americans on CBS’s Face the Nation programme: the Jewish influence completely dominates the scene. To the extent that it makes it “almost impossible to get Congress to do anything they [the Jewish] don?t approve of? (1973).
John Mearsheimer and Stephen Walt’s publication of The Israel Lobby (albeit from London) is part of the sea-change that Judt spoke of. Ten years ago, he wrote, that’d possibly not have happened. In their book, Mearsheimer and Walt, who are political scientists at Chicago and Harvard university respectively say?after having surveyed a wide coalition of pro-Israel groups and individuals (American Jewish organizations and political donors, Christian fundamentalists, neo-con officials in the executive branch, AIPAC, media pundits ready to accuse anyone critical of Israel of being an anti-Semite)?the pro-Israeli lobby has an `almost unchallenged hold on Congress.’ The authors are not loath to point out that their’s is a serious study. It’s not a conspiracy theory.
Mearsheimer and Walt’s work is undoubtedly, politically-speaking, highly significant. Even though they have been severely ostracised (as is only to be expected, after all, the AIPAC’s annual budget is reportedly $15 million), for conservative American academics to come out and declare that Israel is a “liability” for the US, is, well, as Judt suggested, a sea-change. But I myself, have found two other academic studies to be more insightful theoretically-speaking. One is the highly-acclaimed study by Peter Dale Scott, a professor of English. It predates 9/11?interestingly enough, it was inspired by the Kennedy assassination, Deep Politics and the Death of JFK (1993)?but the events of 9/11 have reinforced its significance in helping us to examine and analyse American politics.
To understand Deep Politics, says Scott, one must understand the difference between traditional conspiracy theory, and deep political analysis. Those who are schooled in the first approach, will look for conscious secret collaborations toward shared ends. But if one adopts the deep politics approach, then instead of looking for conspiracies, for that which is `consciously secretive,’ we will re-conceptualise, we will think of the deep political process or system as one which habitually resorts to decision-making and enforcement procedures, both outside, as well as inside, those publicly sanctioned by law and society. What makes these supplementary procedures “deep” is the fact that they are covert or suppressed. They are outside general awareness, outside acknowledged political processes. Some secrets are open. But some, says Scott, are more closely held.
The other is by an article by David MacGregor, September 11 as “Machiavellian State Terror” (The Hidden History of 9-11-2001, published 2006). Machiavellian state terror, writes MacGregor, advances the ruling agenda, while disguising itself as the work of individuals or groups opposed to the state’s fundamental principles.
To be vitally active in the political universe, says the author, one must theorise “oppositionally.” One must question the government. One must look for connections between events.
I’d like to add, one must think oppositionally, even if it be suicidal for one’s career. Better that, than be controlled, by others.