PARIS ? FOR a period of my life, from my 27th to my 39th years, I slept alone: I had no sex. I wasn?t unhappy. Or frustrated. In fact, I found no sex preferable to disappointing sex.

Just before giving up, I had a boyfriend. He often said that we were happy sexually, but frankly he was blind to my unhappiness. So that winter, I went skiing without him.

Alone in all that sun and snow, absorbing energy from the sky and mountains, I let my body breathe quietly. The freedom and whiteness of the snow and mountains produced a kind of ecstasy. And the special pleasure I found skiing in this paradise made me think about the possibilities of my body, my sensuality. And I asked myself, ?Sophie, is your sexual life so very stimulating, actually?? And my answer was, ?No.? I realized that even when I took pleasure, I was not ecstatic with my sexual life. In fact, I seemed to be going through the motions of lovemaking because, I thought, that?s what everybody did. I decided to take a break, to recover a true desire. END_OF_DOCUMENT_TOKEN_TO_BE_REPLACED 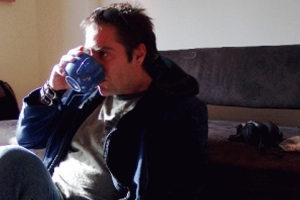 A photo of Yves.
I woke up when Yves thrust himself off the mattress. “My head is killing me,” he said. “I’m going to take some more Tylenol.”
I heard him open the cabinet door, turn on the water as if pouring himself a drink. Then a loud bang startled me from bed.
Yves slumped on the floor, his back against the wall, his side against the bathtub. Tylenol was scattered on the tiles.
“Help me stand up,” he said. But when I wrapped my arm around his waist and pulled him toward me, we both fell forward, my back hitting the vanity as I struggled to cushion him from the fall. His eyes fluttered. He was clearly in pain.
“I think we should call a doctor,” I said.
“No, no,” he said. “I just need to get back to bed. Give me a minute.” Then he closed his eyes.
“Yves,” I said. No response.
I sat beside him, stroking his back, letting him know that he was not alone, while we waited for the ambulance. I had only met Yves in person that day. But it felt like we had known each other for a lifetime.
I’m not sure what made me get in touch with Yves when I saw him on Salon personals. How can we untangle the mysterious calculus that is attraction? I liked how he playfully listed the languages he spoke as “French, English, and Body Language.” I liked the description of the woman he was seeking: “sensualist a must. a self-confident goddess too. a mermaid is also welcomed.”
I’m sure other women looked at his profile and thought “nope.” But I read it and saw a kindred spirit. He lived in Montreal, and I could tell from the way he wrote that he was Quebecois. I liked the idea of the two of us communicating in two languages. “This online dating thing is well ? difficult,” he e-mailed me early on. “And I’m a bit ‘clutsty’ at it.”
It was the “clutsty” that clenched my heart.
END_OF_DOCUMENT_TOKEN_TO_BE_REPLACED