The opening was very moving and there was a great turnout. Here are some live clips. The show is up till the 21st June. Don’t miss it.

The show has also been featured in Time Magazine

Photographs of seventy young and enthusiastic photographers from different parts of Bangladesh. 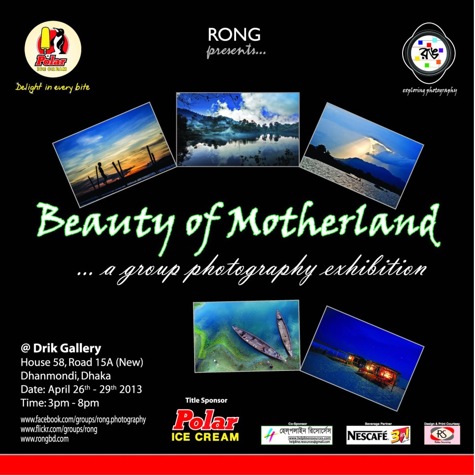 ?Beauty of Motherland? is an exhibition organized by the group of photographers- RONG on 26th April 2013 at 3:30 pm, Friday at Drik Gallery, Dhanmondi, Dhaka. END_OF_DOCUMENT_TOKEN_TO_BE_REPLACED

Drik in cooperation with the Embassy of the Kingdom of the Netherlands, Dhaka, have pleasure in inviting you to the opening of the World Press Photo 12 exhibition at Drik Gallery, on Thursday, 26 April 2012, 5.30 pm. After the launch in Amsterdam on the 20th April 2012, this is the first public viewing of the exhibition, which will also be launched in Poland, Spain, Portugal and Italy in April 2012.

Girls at the Badminton horse trials in 1988

‘Most of the photographs in your paper, unless they are hard news, are lies,? says Martin Parr. ?Fashion pictures show people looking glamorous. Travel pictures show a place looking at its best, nothing to do with the reality. In the cookery pages, the food always looks amazing, right? Most of the pictures we consume are propaganda.?
Parr, 59 years old and perhaps Britain?s best known photographic chronicler of modern life, is sitting in the kitchen of his beautiful Georgian house in Clifton, Bristol. He has served me tea from a fine china pot and ?posh biscuits? bought from the deli up the hill. Susie, his wife of 30 years, is stirring something on the hob. Everything looks rather lovely.
Everything, that is, except the appalled expression on Parr?s face when I suggest that sometimes, regardless of their truthfulness, pictures of things looking their best might be exactly what people want to see. ?Of course,? he says, ?but what people want?? He hits that last word with the force of a punch, then lapses into silence, as if the very thought of taking a photograph that perpetuates a fantasy disgusts him beyond words.
?If you go to the supermarket and buy a package of food and look at the photo on the front, the food never looks like that inside, does it? That is a fundamental lie we are sold every day. Part of the role of photography is to exaggerate, and that is an aspect that I have to puncture. I do that by showing the world as I really find it.?
A new exhibition, Martin Parr: Bristol and West, opening in the city next week, reminds us quite what a ridiculous, contradictory, dysfunctional and occasionally wonderful place Parr finds the world to be. Focusing on the part of the world that he has called home for the past 25 years, its 60 images, both old and new, suggest that whatever else has changed about photography over the intervening decades ? the advent of digital cameras, the death of film ? Parr?s gaze remains as acute and unsentimental as ever.
Has anybody ever looked their best in a Martin Parr photograph? Certainly not the mustachioed yacht salesman shot at Bristol regatta in 1989, his face, as he courts a couple of would-be buyers, frozen in a rictus of obsequiousness. Nor the group of girls Parr stumbled upon at Badminton horse trials, as much a product of good breeding and aggressive grooming as the fillies they have gathered to watch.
That picture finds its echo in another shot in the show, taken 20 years later, of a different quartet of girls of a similar age ? smoking, teetering on a lamplit pavement on a night out in 2009, off-guard, half-cut, mouths open, eyes closed. Parr?s images frequently raise a smile by exposing the gap between the public faces we wear and the private motives and insecurities that, if you know when and where to point a camera, can be seen seeping out from beneath. But if there is a joke here, nobody has let his subjects in on it.
When he is taking a photograph, Parr says, his prime responsibility isn?t towards the people in shot, but to his viewer and to his own sense of the truth of the scene. ?When someone says to you, ‘Oh, I don?t take a good picture,? what they mean is they haven?t come to terms with how they look,? he says. ?They take a fine picture, it?s just that their image of how they think they look is not in touch with the reality.?
I had always wondered how Parr got himself into such intimate proximity with the subjects of his photographs, who so often appear blissfully unaware of the critical lens loitering only inches from their faces. I suppose I?d imagined him to be a flatterer, or else a man of such discretion that people simply forget he is there and let down their guard.
In person, it quickly becomes clear that his chief weapon is not charm but directness. He shoots as he talks, with unflinching certainty and not a hint of self doubt. When I ask if he ever seeks a person?s permission before photographing them, that pained expression reappears. ?You would never get anything done if you did that,? he says. ?And besides, you still have the legal and moral right in this country to photograph anyone in a public place and do what you like with it.? So there.
Parr, who has been a member of the renowned Magnum picture agency since 1994, estimates he takes ?tens upon thousands? of photographs a year. Unusually in this digital age, he prints out ?maybe 15,000 of them? and, he adds, ?If there are 10 good ones, it would be a good year.? Themes recur ? ?tourism, consumerism, the Americanisation of the world? ? but his scope is dizzyingly broad: ?I am interested in people and what they do,? he says, ?the foibles of the world.?
As he approaches 60, Parr?s passion for his medium grips him as firmly as it did when his grandfather, an amateur photographer, first gave him a camera as a boy. ?I can?t imagine a time when I wouldn?t want to take photos,? he says. ?Photography for me is not work, it?s a calling.?

Martin Parr was one of the early photography trainers at Drik. His exhibition “Home and Abroad” was shown at Drik Gallery. Parr also gave a talk at the British Council, Dhaka.

Mexican photographer Pedro Meyer is recognized widely both for his provocative and powerful images and his pioneering work of in the digital imaging era. The photographs of Meyer consistently question the limits between truth, fiction and reality. With the advent of digital technologies at the early 90’s, Meyer evolved from a documentary photographer, who created what is known as “direct images”, to a digital documentary maker, who combines elements of different photographs to arrive to a higher or different truth. His famous statement that every photograph, either digitally manipulated or not, is both truth and fiction, has earned him being called a ?Heretic? in the orthodox world of documentary photography. Hence the origin of the title, ?Heresies: a retrospective by Pedro Meyer?. Amongst the personal contributions of Meyer to the development of digital photography we should underscore: the creation of the first CD-ROM that combined images with sound, the first digital printings in the world, in 1994; and more recently, the creation of the photographic forum zonezero.com, the most visited photography website -content-wise-in the Internet.

In an era in which museums suffer from strong economic restrictions and their role as authoritative institutions in the world of the arts is being redefined, the new and heretical paradigm for the photographic exhibition that Meyer presents facilitates:

– The creative collaboration between curators and artists

– Stimulating educational programs that attract the attention of the iPod generation.

The journey from Mexico to Bangladesh had not been kind to the print. It had been bent in places and was somewhat ragged at the edges. The strong red was a colour I’ve since learnt to associate with Mexico and the unusual palette was something I later learnt to link with digital prints of that time. The striking image of a fish being cooked was riveting enough to get me to immediately try and straighten the battered print, and get it framed. It was one of the few prints on my wall. But alongside the print was a letter from a man I knew and was fond of, but had never met, or spoken to. It was a hand written note that talked of his excitement at seeing the thermal print emerge from the printer. I could relate it to the same excitement that both he and I had felt when the blacks begin to appear in the developing tray in a darkroom. This was his first print on his new printer, and he had sent it all the way to Bangladesh.
Pedro Meyer was a giant in the photography scene. As we got to know each other from opposite ends of the globe, my curiosity grew. It was 1994. I had a show in the festival in Arles. Pedro was having a much bigger show of his digital prints on canvas. Rahnuma, Ma and I arrived at the gallery, where Pedro was showing his new CD ROM, ‘Truths & Fiction”. Assuming I was Hispanic, Pedro asked if I would like to see the Spanish version of the CD. I smiled and said, “I would love to see a Bangla version.” “Ah” he said. “I must introduce you to my Bangladeshi friend Shahidul Alam. He’s in town.” That was how we finally met. Recovering from his bear hug, once I’d revealed who I was, I settled down in a quiet room to watch “I photograph to remember.” It was one of the most moving storytelling I had ever seen. The fact that it was the first CD to use images and sound, was relevant. But it was the tender and poignant portrayal by a son of his parents’ final days that had moved me to tears. We stayed friends, and went through the gamut of communication. Snail mail, telex, fax, off-line email and Skype, discussing images, sharing stories, arguing finer points on digital technology.
Throughout his long career, this remarkable artist has combined his visual genius with unbridled wit, and a work rate that would tire photographers a fraction of his age. This latest exhibition, yet another global first, is evidence of that untiring drive to innovate. He is a heretic. He says NO. At every stage where you might feel comfortable, he forces you to rethink your firmest beliefs and question your perceptions of truth and fiction.
Shahidul Alam
Miami
29th September 2008