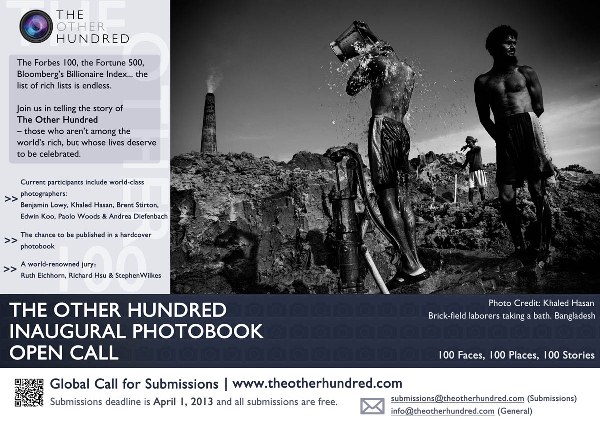 The Forbes 100, the Fortune 500, Bloomberg?s Billionaire Index, the list of rich lists is endless.? But the super-rich are only a very small fraction of the population, and their story is not the whole story. It is this other story that we would like to tell in The Other Hundred, a photo-book aimed at bringing attention to the overwhelming majority of the world?s people who are not billionaires but who nevertheless lead lives worth celebrating.
The Other Hundred has a broad base of international support from the expertise of our outstanding judging panel featuring Ruth Eichhorn, Richard Hsu, and Stephen Wilkes and the participation of excellent photographers including Benjamin Lowy,?Khaled Hasan,?Brent Stirton,?Edwin Koo, Paolo Woods?and?Andrea Diefenbach.
The goal of The Other Hundred is both to inform and to provoke thought. This means that we don?t just want photographs of the hardships of a life of poverty, but also of the startling achievements people can make in the face of adversity. It is important to us that our subjects come across as real people to be understood, even celebrated, rather than anonymous statistics to be pitied or patronised.
Each submission may be a single photograph or a series of photographs. This is a global endeavor, and we welcome submissions from any and every country and continent.
For submission information, please visit www.theotherhundred.com.

But let me return to the central question: is it reasonable to claim that western governments were directly involved in the consortium project? That they were, as I argue, not only one of the constitutive elements, but the leading one?
Some may reply that the presence of the Coffee Group (generally known as the “Tuesday Club”), the frenzied activity of its members prior to the consortium coup, and after — settles the matter. That, the evidence of their activities is well-documented in both print  and electronic media, that it is considerably strong, and that convictions on the basis of far less circumstantial evidence have been awarded by courts of law, ones that enjoy credibility.
A WikiLeaks leaked cable dated January 11, 2007 (Subject: Diplomats Coordinate Strategy On Bangladesh, Reference ID: 07DHAKA53), signed by Patricia Butenis, then US ambassador to Bangladesh, describes the Tuesday Club thus to her superiors in Washington, END_OF_DOCUMENT_TOKEN_TO_BE_REPLACED


Mine has receded, the government’s however, has not. Their’s is prolonged, one that continues. High state and party functionaries have repeatedly spoken of “irregularities” with a feverish zeal as the Bangladesh Bank relieved Dr Muhammad Yunus of his duties as managing director of Grameen Bank.
He had violated the country’s retirement law, they said. Sixty years is the age limit but Yunus was 70. This made him “too old” to be Grameen Bank’s chief, said the finance minister. He should have left ten years ago, said the Bangladesh Bank, instead of staying on “illegally”for an extra ten years.
In a writ filed at the High Court, Yunus’ defence lawyers argued that the Bangladesh Bank’s directive was illegal. No show cause notice had been served, this made his removal “illegal, malafide and arbitrary.” A week later, on 8th March, Dr Yunus lost his High Court appeal when the judge ruled, ?Professor Yunus has been continuing in his job with no legal basis, therefore his petition has been rejected.? ?Neither Yunus nor any of his senior lawyers were present at the court. ?In recent months, the independence of the judiciary has been a matter of grave concern.
Yunus and 9 members of the board of directors have filed an appeal with the Supreme Court challenging the High Court’s order. A full bench hearing is scheduled for March 15. The HC’s decision was “entirely perverse” said Dr Yunus and the members of his board, it was passed without issuing any ruling.
The alignment of local, national and global influentials against, and in support of, Yunus is telling. The prime minister’s son Sajeeb Wajed, in an e-mail sent to international agencies, human rights organisations, US state department officials and prominent persons, wrote: Yunus’ only stature in Bangladesh is that of a “Nobel prize winner,” politically-speaking, he’s a “non-entity.” Accusing the Grameen Bank of “massive financial improprieties,” “tax evasion” and “embezzlement,” Sajeeb reminded us that despite being “criminal” offences, the government has not taken any “punitive” action against Yunus. It’s only concern is to “prevent further abuse of microcredit borrowers.” (dated March 5, 2011).
As I read the e-mail, I mulled, is this not the same prime ministerial offspring against whom allegations of taking a $2 million bribe from Chevron surfaced recently? A deal reportedly brokered by Dr. Tawfiq-e-Elahi Chowdhury, the prime minister’s energy advisor, a la, also, of WikiLeaks fame? (`People’s resistance to global capital and government collaboration is vindicated,’ WikiLeaks Bangladesh I, New Age, December 27, 2010). ?Did not the news item (December 17, 2010) later land the editor of Amar Desh in jail? At least, that’s the connection made by some.