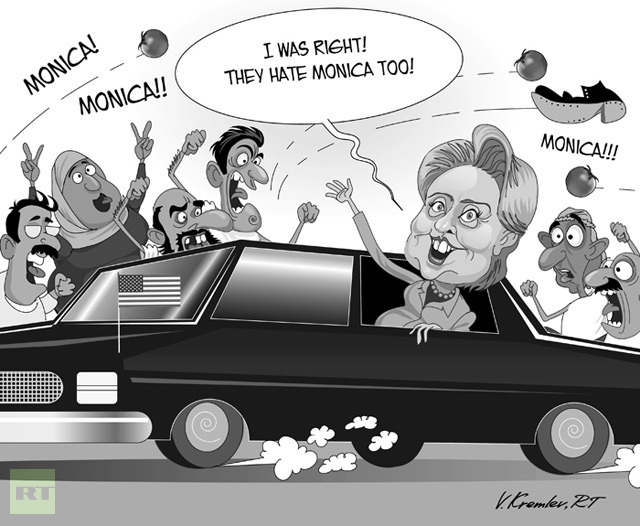 The US Secretary of State Hillary Clinton while on a surprise visit to embattled Libya, shows the V-sign as she poses with NATO-funded Libyan “rebels.? October 2011.


On hearing news of the Libyan leader colonel Muammar Gaddafi’s death, US secretary of state Hillary Clinton gleefully proclaimed — while paraphrasing the words of the Roman emperor Julius Caesar, Vini, vidi, vici, `I came, I saw, I conquered’ — `We came, we saw, he died.’
These words, uttered in-between formal television interviews which were being recorded in Kabul, has been likened by some to the shouts of `Allahu Akbar’ which accompanied the actions of a large group of rebels, armed and directed by NATO, thousands of miles away in Sirte. The rebels beat, shoved, pushed and dragged a disoriented and bloodied Gaddafi, allegedly sodomised him, before shooting him to death.
I do not know whether drawing parallels between the US secretary of state’s response `We came, we saw, he died’ to the shouts of `God is great’ by NATO’s rebel forces, is appropriate, is justified.
What I do know however, is that secretary of state Clinton had called for the killing of Gaddafi while addressing Libyan students and others in a town-hall style gathering in Tripoli, “We hope he can be captured or killed soon” (Hillary Clinton details new aid package to Libya, The Guardian, October 18). But not even a whisper of outrage, not in The Guardian or in other western news outlets, unlike that which had followed the Iranian leader Khomeini’s call for the death of novelist Salman Rushdie, author, The Satanic Verses, in 1989.
What I also know, as I’m sure you do too, is that Gaddafi’s `death’ (read, murder) has been hailed by world leaders. Britain was “proud” of the role she had played in helping anti-Gaddafi forces in liberating the country, said prime minister David Cameron. The day marked “an historic transition for Libya,” said Ban Ki-moon, the United Nations secretary general. The American president Barack Obama termed it a “momentous day” in the history of Libya as the “dark shadow of tyranny has been lifted.” While the European Union president Herman Van Rompuy and Commission president Jose Manuel Barroso said in a joint statement, Gaddafi’s death “marks the end of an era of despotism” (Sky News, October 20).
What some may not recall however, is that Washington’s arch enemy, the jihadists are working together with NATO in Libya, that “former” al-Qaeda affiliated brigades constitute the backbone of the “pro-democracy” rebellion. (NATO bombings, al-Qaeda and the Arab spring, New Age, October 3, 2011).
A fact that exposes the US-led war on terror against “jihadist Islam” for being what it is, an utter fabrication. One that is repeatedly manufactured by the mainstream western media; demonstrated yet again in the manner in which it reported the Libyan transitional leader’s recent declaration that Sharia law will become the “main source” of legislation in Libya, that Qaddafi-era legal restrictions on polygamous marriage will be done away with. How to explain this “sizable step backward” since polygamy in Gaddafi’s Libya was “limited and rare for decades”? The New York Times, while noting that the news is “unsettling” for Libyan women and its “allies abroad,” resolved its predicament by informing readers that Libya’s new leader Abdel-Jalil is known for his “piety.” (Hinting at an end to a curb on polygamy, interim Libyan leader stirs anger, October 29).
What occurred in Libya is patterned on a model, says Adrian Salbuchi, Argentinian author, financial analyst and founder of the Argentine Second Republic Movement. “First they target a country by calling it a rogue state; then they support local terrorists and call them freedom fighters; then they bring death and destruction upon civilians and they call it UN sanctions. Then they spread lies and call it the International Community?s opinion expressed by the Western media. Then they invade and control the country and call it liberation and finally they steal appetizing oil and call it foreign investment and reconstruction.” (Russia Today, October 21).
Hillary Clinton’s `We came, we saw, he died’ is a message to the world, says Salbuchi, about how the new world order actually works. END_OF_DOCUMENT_TOKEN_TO_BE_REPLACED