Associated Press photographer Santiago Lyon instructs Claire Higgins, editor of Northern Kentucky University’s student newspaper during a workshop. The workshop followed Lyon’s talk for NKU’s Six@Six Lecture Series. (Photo by NKU photographer Timothy Sofranko)?
By Mark Neikirk
Special to KyForward
Santiago Lyon?s day began on Nov. 16 with some disturbing news. An Associated Press photographer?s car had been struck by a rocket as Israeli and Hamas forces exchanged fire in the latest hostilities over Gaza. Fortunately, the photographer was out of his car when the rocket hit. He was uninjured aside from some ringing in his ears. END_OF_DOCUMENT_TOKEN_TO_BE_REPLACED

Dhaka, 26 November, 2012: Drik held an interactive global dialogue today, with media leaders looking at the potential of New Media and the creation of content to suit the evolving market place.  Saiful Islam, CEO Drik in his welcome address stressed the importance of moving into the global market place with products using new media, citing the twitter book as an example of new forms of publishing.

END_OF_DOCUMENT_TOKEN_TO_BE_REPLACED 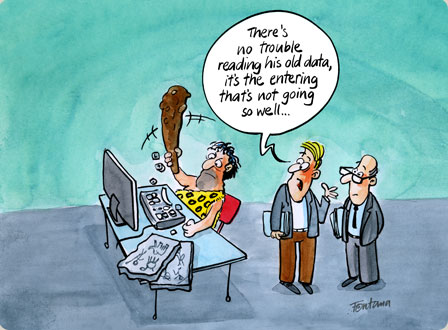 Remember those days? It was 1993. Getting a new telephone line took several years and large bribes. Getting an international line was another matter and calling overseas required making a ?Trunk Call? through an operator and a wait of several hours. Phone calls were expensive. A one-minute fax or call to the US cost well over 100 Taka. The exchange rate was very different, and a 116 Taka one page fax would have set you back three US dollars! We needed government permission to import a fax machine and the clunky early generation mobile phones cost over one lakh each (US $ 2,500). It was less than twenty years ago. Now, Mobin, the guy in our mudir dokan (corner shop) downloads videos from my blog (where he is featured) on his mobile phone. We get news on TV sandwiched between gyrating boys and girls advertising FnF connections.  My attempts to curb Facebook use at work has failed miserably. We finally have 3G, at least partially.
How did this digital revolution come about? We had decided to set up our picture agency Drik, not in the established photographic marketplaces of London, Paris or New York, but in Dhaka, where our photographers were based. But while we were close to our photographers our distance from the market, in terms of miles and means was enormous. What we also wanted to do was to set up a South-South exchange, so we could build on our collective strengths. A Dutch organisation called TOOL was interested in publishing my book, and I decided to meet up with them while in Amsterdam for the judging of World Press Photo. Researching on them I discovered they also offered off-line email, using Fidonet technology. More importantly, they too were keen on setting up a South-South exchange. END_OF_DOCUMENT_TOKEN_TO_BE_REPLACED

On both sides of the ongoing clash of bigotries and stupidity, the Prophet Muhammad is incidental to the true motives of the antagonists

I’m not a conspiracy theorist, but I strongly sense conspiracy in the whole sordid “film maligning the Prophet” fracas, which, in a few hours, claimed the lives of three American diplomats and delivered a devastating blow to the Arab revolutionary upsurge, and to the new democratic and pluralistic awareness that both lay behind that upsurge and was its most precious product. Let me hasten to explain, however, that I use the questionable term, conspiracy, not in the sense that everyone from the makers of the film to the hysterical demonstrators that attacked the American missions in Cairo and Benghazi are in cahoots; nor do I base my argument simply on “who benefits most”, which almost invariably is the conspiracy theorist’s most crucial analytical tool.
What I really mean by “conspiracy” here is that the Prophet Muhammad is in fact wholly secondary to the real motives of the various parties to the ugly and bloody brawl. Yet, somewhat like the conspiracy theorist, I base my argument more on a reading of the events and their context, rather than on concrete, tangible facts. END_OF_DOCUMENT_TOKEN_TO_BE_REPLACED

42:42Bobby Mitchell and The Toppers – Send Me Your Pictureby?9thWardJukebox206views