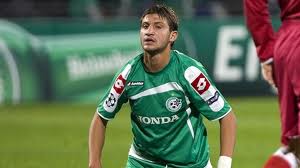 Maccabi Haifa striker Mohammed Ghadir believes that he and Beitar Jerusalem, the bad boy of Israeli soccer, are a perfect match.
“I am well suited to Beitar, and that team would fit me like a glove. I have no qualms about moving to play for them,” Mr. Ghadir is quoted by Israeli daily Ha?aretz as saying. Beitar has a large squad, a significant fan base, wide media coverge and lacks talented strikers, he says.
There is only one hitch: Beitar doesn?t want Mr. Ghadir. Not because he?s not an upcoming star and not because they wouldn?t need a player like Mr. Ghadir but because the striker is an Israeli Palestinian. “Our team and our fans are still not ready for an Arab soccer player,” Ha?aretz quotes Beitar?s management as saying. The club prides itself on being the only top league Israeli club to have never hired a Palestinian player in a country whose population is for 20 per cent Palestinian and in which Palestinians play important roles in most other top league teams. END_OF_DOCUMENT_TOKEN_TO_BE_REPLACED