It took ten years for Rina Di (Rina Mukherjee) to get her share of Justice! Ten years ago, we (Suvendu Chatterjee and me) sat in the 10ft by 10ft ground floor room of what was then the only office-space of a one-year-old Drik India, facing Rina Di, listening to her ordeal at The Statesman House, through one of the senior officials of the reputed Daily. END_OF_DOCUMENT_TOKEN_TO_BE_REPLACED 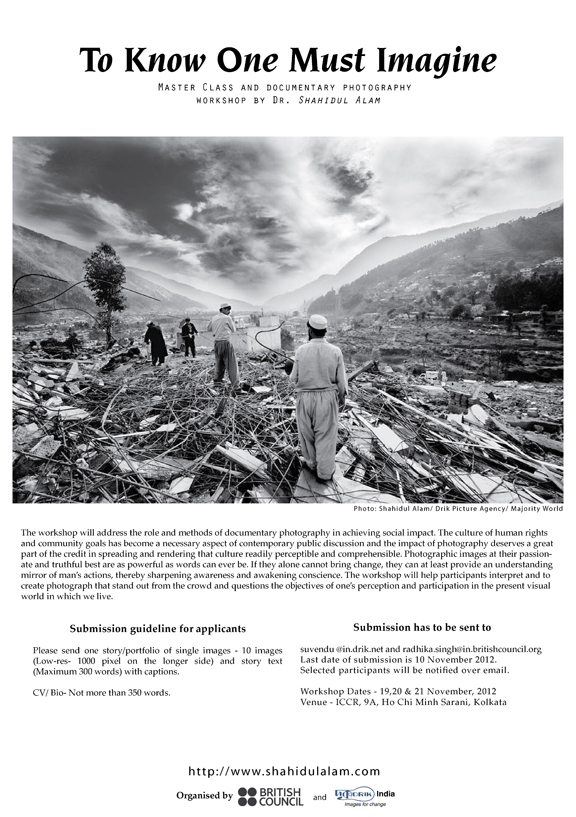 Dr. Shahidul Alam, eminent photographer and social activist from Bangladesh will facilitate a two and half day Master Class and documentary photography workshop titled ?Photography for social impact ? To know, one must imagine? from 19 November ? 21 November 2012 at Indian Council for Cultural Relations ( ICCR) , Kolkata.http://www.worldpressphoto.org/content/shahidul-alam
This workshop is being jointly organised by British Council and DRIK India.
The workshop will address the role and methods of documentary photography in achieving social impact. The culture of human rights and community goals has become a necessary aspect of contemporary public discussion and the impact of photography deserves a great part of the credit in spreading and rendering that culture readily perceptible and comprehensible. Photographic images at their passionate and truthful best are as powerful as words can ever be. If they alone cannot bring change, they can at least provide an understanding mirror of man?s actions, thereby sharpening awareness and awakening conscience. The workshop will help participants interpret and to create photograph that stand out from the crowd and questions the objectives of one?s perception and participation in the present visual world in which we live.


Pathshala, the South Asian Media Academy takes pleasure in inviting you to the presentation of Frank?Fournier in Pathshala.
Frank Fournier is a French photographer. He originally studied?medicine before becoming a photographer. He moved to New York and?became a staff photographer at Contact Press Images in 1982 after joining the office staff in 1977. His portrait of Omayra Sanchez, a 13-year-old trapped under the debris of her home, won the 1986 World?Press Photo award.
Frank is currently in Bangladesh to conduct a workshop on international reporting at Sylhet in the north east of Bangladesh. He is one of three international photographers, the others being Greg Marinovic (Kolkata), and Philip Blenkinsop (Kathmandu), who will be lead trainers in workshops involving photographers in Bangladesh (organised by Pathshala), India (organised by Drik India) and Nepal (organised by Photo Circle). Pathshala tutors Munem Wasif (India), Tanzim Ibne Wahab (Nepal) and Debashish Shom (Bangladesh) who along with Per Anders Rosenkvist of Oslo University College (OUC) ?in Norway,?will provide mentoring throught the workshop.
Pathshala has been actively collaborating with OUC for over six years, and students from Bangladesh, Nepal and Norway have been involved in exchanges supported by the Norwegian Ministry of Foreign Affairs.
Frank’s presentation follows talks by David Burnett (December 2011) and Pep Bonet (January 2012) and is part of the regular teaching programme at Pathshala.
The schedule of the presentation:
Date: February 04, 2012
Day: Saturday
Time: 6.00 pm
Venue: Pathshala (Room # 1)


Twenty-one-year-old Shankar Sarkar is both perturbed and fascinated by the surroundings he grew up in ? a red light area in the city. Shankar’s discomfort resulted in him dropping out of school but his enchantment led him to click a series of photographs of his mother, eventually enabling him to find a niche for himself in professional photography.
On the occasion of Children’s Day, a three-day exhibition of photographs taken by two children from the margins was inaugurated here on Monday.
?From the first time that I held a camera in my hand (a compact Yashica film camera that had to be shared by six boys from the slum), I have been taking pictures of my mother ? scenes from her daily life,? says Shankar, adding that in this manner he has been ?documenting? her life over the last ten years.
He says he would love to take pictures of others in the neighbourhood ? he has known them for years. But when he steps out with his camera, ?it invariably leads to a fight?. Sometimes he visits other red light areas in the city, for instance Sonagachi.
END_OF_DOCUMENT_TOKEN_TO_BE_REPLACED