Speculation about the Bilderberg Group runs rife at both ends of the political spectrum ? ‘Bilderberg meetings are a corporate-globalist scheme planning to move the planet toward an oligarchic new world order.’ ‘The Republican Party (US) is secretly controlled by elitist intellectuals who are dominated by the Bilderberg Group, their internationalist policies will pave the way for world communism.’ ‘It is a secret cabal that runs the world.’ ‘Presidents and prime ministers are selected by the Bilderberg.’
It is secret. It is conspiratorial. It runs the world.
Thierry Meyssan of the Voltaire Network International, a web of non-aligned press groups dedicated to the analysis of international relations, blames ‘journalistic hacks’ (he names Alex Jones and Jim Tucker) for making millions of people around the world believe that the Bilderberg Group is not only a secret conspiratorial group that runs the world, but selects presidents and prime ministers so that they can execute the Group’s political and economic agenda (What you don’t know about the Bilderberg Group, May 9, 2011).
Whereas, the Bilderberger Conference is actually ‘nothing more than a? propaganda organisation to prop up and give legitimacy to NATO’ (North Atlantic Treaty Organisation).
But the comfort some readers may hastily derive from reading that it is ‘nothing more than a propaganda organisation’, that the Bilderberg Group is not — contrary to the idea developed by ‘creative journalists’ — working to forge a ‘secret World Government’, will hardly be sustained after reading what Meyssan goes on to write: ‘It is in fact much more serious and dangerous, because it is NATO which aims to be the secret World Government – guaranteeing the international status quo and maintaining U.S. influence.’
Meyssan claims to have been the only journalist who has had access to their archives, to all records for the period 1954-1966, many later day documents as well, in addition to having had the benefit of speaking to a former participant whom he had known for long. Unlike those journalists, who, he says, have helped to construct a stereotypical image of the Bilderberg ? a secret cabal, new world order — popular in many western activist circles.
Meyssan argues that the idea of the Bilderberg Group conspiring to create ‘a mysterious future World Government’ is misleading. It serves to mask their true function and identity, i.e., lobbying for NATO’s interests which is served by setting up a secret world government to maintain the international status quo and US influence. 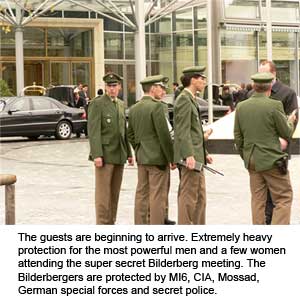 END_OF_DOCUMENT_TOKEN_TO_BE_REPLACED

Last year, when I’d asked Nurul Kabir if he knew that America’s central bank, the Federal Reserve, ?was privately-owned (New Age, November 14, 2011),? I’d slipped in a mention of the Bilderberg Club as well. Have you heard of it? No, he replied.
The same reply from another journalist friend, who works for one of the largest-circulation Bangla newspapers, when I met him recently. ‘The Bilderberg Club, does that ring a bell?’ ‘Uh-uh,’ accompanied by a puzzled look on his face.
Not surprising given that the Club, also known as the Bilderberg Group, has been excessively secretive about its existence. In the more than fifty years of their meetings, writes investigative journalist Daniel Estulin — who has relentlessly hunted their secret meeting places for nearly the last two decades, has gained access to insider information of what goes on ‘behind closed doors,’ has photographed those who have attended their annual conferences, and divulged it all in his book The True Story of the Bilderberg Club (2007) — the ‘press has never been allowed to attend, no statements have ever been released on the attendees’ conclusions, nor has any agenda for a Bilderberg meeting been made public.’ END_OF_DOCUMENT_TOKEN_TO_BE_REPLACED