parts of the country on April, 25. The 7.8 magnitude earthquake’s epicenter was 81 kilometers (50 miles) northwest of Kathmandu, Nepal at a depth of 9.3 moles. The Meteorological Department stated that the epicenter of the earthquake was 745 km north-west of Bangladesh. Tremors were felt also across the region, in India, Tibet, China, Tibet and Pakistan (Prothom Alo; bdnews24.com; the Daily Star, April, 25; and CNN, April, 26).
Another Earthquake followed the earlier one

:
Bangladesh: In Bangladesh, total 5 people were killed and up to 100 people were injured while evacuating. One female was killed by collapse of wall made of mud along with other two

women were killed in Pabna and Dhaka. One worker was killed along with 50 injuries in Savar. Another death toll occurred in Sunamganj. 50 readymade garment workers were injured at Ishwardi (Situation Report, DDM, April 25; Prothom, April, 26). 23 buildings

were damaged in all over Bangladesh (Situation Report, DDM, and April, 25).

Nepal: The 7.8 magnitude quake along

aftershock of magnitude 6.6 followed by nearly three dozen other aftershocks struck an area of central Nepal between the capital, Kathmandu, and the city of Pokhara on Saturday morning (April 25, 2015). The Home Ministry identifies that more

of cities. The earthquake flattened homes, buildings and temples, causing widespread damage along

April, 26) Mobile phones, Electricity and other communications were disrupted. Around 6.6 million people are affected in Nepal according to the UN Office in Kathmundu (India today 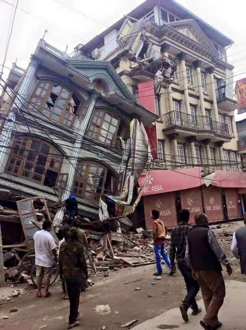 tilted due to earthquake in Nepal 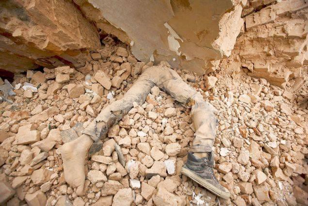 ? A man trapped under a building

in Nepal
Government of Bangladesh provided 10 tons of reliefs including food (biscuit, water, and dry foods), medical (medicine) and humanitarian help (tent, blanket) along with a team of 34 members

of physicians and Bangladesh Air force crew (bdnews24.com, April, 26; Prothom Alo, April, 26).
The U.S. government is providing $1 million in immediate assistance to Nepal. Aid agencies expressed concern for the welfare of survivors in the coming days, as overnight temperatures were expected

to drop and people were forced to make do without electricity, running water and shelter. (US Geological Survey, CNN, April, 26; BBC News, April 26 and Prothom Alo, April 25).

urgent support. A number of

the Children, the British Red Cross and Plan International UK are assessing the humanitarian need in the disaster struck area.
India: Officials in India confirmed

at least 52 deaths in three states from the Earthquake. (bdnews24.com, April, 26)
Tibet: At least 17 people were killed and 53 injured along with roads buckled and buildings