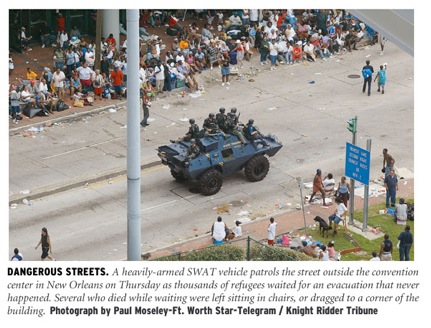 FEMA won’t accept Amtrak’s help in evacuations – Financial Times, 9/5/05
FEMA turns back Wal-Mart supply trucks – New York Times, 9/6/05
FEMA prevents Coast Guard from delivering diesel fuel – New York Times, 9/6/05
FEMA blocks 500-boat citizen flotilla from delivering aid – News Sentinel, 9/8/05
FEMA asks media not to take pictures of dead – Washington Post, 9/8/05
FEMA turns back German government plane loaded with 15 tons of food – Spiegel, 9/12/05
While civilian aid for victims was made scarce, private security forces already had boots on the ground. As Jeremy Scahill reported in The Nation, Blackwater (re-named Xe) had set up an HQ in downtown New Orleans. Members of this private militia company were armed, and operated, as in Iraq: automatic rifles, guns strapped to legs, pockets overflowing with ammo, driving around in SUVs and unmarked cars with no license plates. When asked one of them replied: We’re on contract with the Department of Homeland Security. We can make arrests and use lethal force if we deem it necessary.
And the US government’s response to the earthquake in Haiti, on Jan 12 this year? A massive deployment of military hardware and personnel. Nine to ten thousand troops, including 2000 marines. Overall humanitarian operation led by the Pentagon. Dominant decision making role entrusted to US Southern Command (SOUTHCOM). The US, as the French cooperation minister remarked before being quickly shushed-up, seemed to be `occupying’ rather than helping Haiti. But why on earth would the US want to occupy a poor, impoverished nation like Haiti?
Haiti, according to recent revelations, has oil reserves which in comparison to Venezuela’s are like an Olympic swimming pool is to a glass of water. The US, according to Haitian scholar Dr. Georges Michel, has known of Haiti’s oil and natural gas reserves since 1908. After completing their explorations in the 1950s, they locked up what had been discovered, as “strategic reserves for the US.” To be tapped only when Middle Eastern oil becomes less available. Other Haitian scholars add, not only oil, but also Haiti’s strategic position, cheap labor, deep water ports, mineral resources (iridium, gold, copper, uranium, diamond, gas reserves, zyconium deposits), lands, waterfronts, offshore resources for privatization or the exclusive use of the world’s wealthy oligarchs and US big oil monopolies.
As I come across news reports, the Venezuelan president Hugo Chavez says the US was playing God by testing weapon that caused Haiti quake (Russia TV), I cannot help but trace parallels in the US government’s response to the disasters in Katrina and Haiti. The former seems to have been a dress rehearsal for the latter. Re-designing our thinking. The project of domination, as Eisenhower had put it.
Published in New Age 1 March 2010

2 thoughts on “`Owning' the weather? PART V Katrina and Haiti”