“In 2025, US aerospace forces can ?own the weather? by capitalizing on emerging technologies?and focusing development of those technologies to war-fighting applications…?weather-modification offers the war fighter a wide-range of possible options?to defeat or coerce an adversary.”

`Owning’ the weather? You must be thinking, What a preposterous idea!
Apparently not, for those who wrote the report from which I’ve quoted above (August 1996). It was a study commissioned by the chief of staff of the US Air Force to examine the “concepts, capabilities, and technologies the United States will require to remain the dominant air and space force in the future.” One which was reviewed by security and policy review authorities, and cleared for public release.
As I read the report, I cannot help but wonder at what is contained in those documents which have not been revealed to the public, ones that are classified. Neither can I help but marvel at the devotion and hard work that has gone into imagining, drawing-up and detailing such a scheme of mass murder. At the colossal criminality involved. An issue that the authors hurriedly traverse?”[weather-modification techniques] offers a dilemma,” it is a “controversial issue,” “some segments of society” are reluctant?lest they have any second thoughts, lest they develop any moral qualms over the matter.
Of course, as is only to be expected, all the necessary disclaimers are there. The views expressed are those of the authors. They do not reflect the official policy or position of the US Air Force. Or, the Department of Defense. Least of all, the US government. Representations of future scenarios are fictional. Any similarity to real people, to real events, why, to reality itself?is unintentional.
Weather modification, write the authors, has “tremendous military capabilities” (see table). Rainfall can be enhanced to flood the enemy’s lines of communication. To reduce the effectivity of precision guided missiles (PGM). Rainfall can be prevented too. To deny the enemy access to fresh water. To induce drought and wreck food cultivation. Fogs and clouds can be generated, or removed. Friendly forces merit generation, to enhance their ability to conceal themselves. While enemy forces shall suffer from fog/cloud removal, to deny concealment. To smoke ’em out?
To develop an integrated weather-modification system, technological advancements are necessary in five areas: (1) advanced nonlinear modeling techniques (2) computational capability (3) information gathering and transmission (4) a global sensor array, and (5) weather intervention techniques. Some of these “intervention tools” already exist, we are told. Others may be developed. May be refined. For future use. To develop and refine technologies of mass murder….?
Current weather-modification technologies which will mature over the next 30 years, will?in all likelihood?become “a part of national security policy with both domestic and international applications.” A policy that could be pursued at “various levels”: NATO. UN. Coalition. And, if the national security strategy in 2025 includes weather-modification, “its use in our national military strategy will naturally follow.” Its benefit? It’ll “deter and counter potential adversaries.” It’s “appropriate application… can provide battlespace dominance to a degree never before imagined.” The executive summary ends on this ominous note: ?The technology is?there, waiting for us to pull it all together;? in 2025 we can ?Own the Weather.? 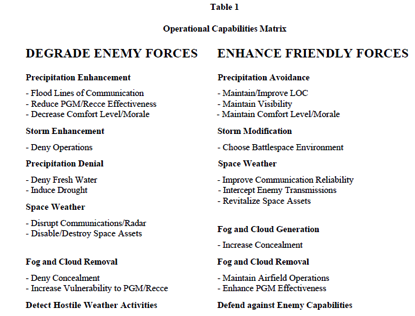 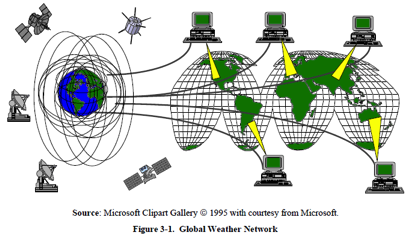 The current military and civilian worldwide weather data network will evolve and expand to become a Global Weather Network (GWN). One which will be a super high-speed, expanded bandwidth, communication network by 2025. By then, weather-prediction models will prove to be “highly accurate in stringent measurement trials against empirical data.” And the “brains” of these models? “Advanced software and hardware capabilities which can rapidly ingest trillions of environmental data points, merge them into usable data bases, process the data through the weather prediction models, and disseminate the weather information over the GWN in near-real-time” (see Figure).
Although “extreme and controversial” examples of weather modification, such as, the creation of made-to-order weather, large-scale climate modification, creation and/or control (or ?steering?) of severe storms, etc. were researched, “technical obstacles preventing their application appear insurmountable within 30 years.” And therefore, the authors write, these are only mentioned briefly.
Close observers are inclined to disagree. Weather warfare, they think, has already started.
“What are the underlying causes of extreme weather instability, which has ravaged every major region of the World in the course of the last few years?” writes professor Michel Chossudovsky, one of the keenest analysts.
He continues, “Hurricanes and tropical storms have ravaged the Caribbean. Central Asia and the Middle East are afflicted by drought. West Africa is facing the biggest swarm of locusts in more than a decade. Four destructive hurricanes and a tropical rain storm Alex, Ivan, Frances, Charley and Jeanne have occurred in a sequence, within a short period of time. Unprecedented in hurricane history in the Caribbean, the island of Grenada was completely devastated: 37 people died and roughly two-thirds of the island’s 100,000 inhabitants have been left homeless; in Haiti, more than two thousand people have died and tens of thousands are homeless. The Dominican Republic, Jamaica, Cuba, the Bahamas and Florida have also been devastated. In the US, the damage in several Southern states including Florida, Alabama, Georgia, Mississippi and the Carolinas is the highest in US history.”
While global warming is undoubtedly an important factor, writes Chossudovsky, it does not fully account for these extreme and unusual weather patterns.
In the 5 years since he wrote “The Ultimate Weapon of Mass Destruction: “Owning the Weather” for Military Use” (Global Research, September 2004), many more natural disasters have occurred: the Asian tsunami which hit 14 countries; Indonesia, Sri Lanka, India and Thailand most severly, killing nearly 230,000 (December 2004). Hurricane Katrina in New Orleans, Louisiana, 1,836 people lost their lives (August 2005). Great Sichuan earthquake in China, 68,000 died (May 2008). The recent earthquake in Haiti, 200,000 estimated dead (January 2010).
Both the Americans and the Russians have developed capabilities, says Chossudovsky, to “manipulate the World’s climate.”
In a 1997 article of The Wall Street Journal (Nov 13), Chen May Yee wrote about a memorandum of understanding to be signed soon between a Russian and a Malaysian company to create a hurricane that would create torrential rains, one that would be directed close enough to clear the smoke without actually coming on land to create a devastation. In an earlier piece The Wall Street Journal had reported that a Russian company, Elate Intelligent Technologies Inc., advertising under the slogan `Weather Made to Order’?sold weather control equipment. Elate is capable of fine tuning weather patterns over a 200 square mile area, for as little as $200 per day. Hurricane Andrew, which had occurred a year earlier and had caused damage worth $30 billion could have been turned into “a wimpy little squall,” according to Igor Pirogoff, a director of Elate. Doesn’t this mean that hurricane Katrina too, could have been diverted?
As I research on the internet, I come across another news item: “Entering a thunderstorm 10 miles off West Palm Beach, a B-57 Canberra jet bomber chartered for one million dollars releases some 9,000 pounds of improved Dyn-O-Gel capable of 10-times stronger water absorption. Miami’s Channel 5’s weather radar shows the huge thunderhead losing moisture. Within seconds, the buildup vanished as one side of the cloud collapsed ?like an avalanche?, according to a chase plane cameraman.” (Sun-Sentinel July 20/01).
As a weapon of war, the use of weather modification techniques was publicly described much earlier. On 20 March 1974, by the Pentagon. A 7 year cloud seeding effort in Vietnam and Cambodia, costing $21.6 million, had been initiated to increase rainfall in target areas, thereby “causing landslides and making unpaved roads muddy, hindering the movement of supplies.” ?That US forces had suffered a drastic defeat in Vietnam, and forced to leave in 1975, is now part of history.
At present, other countries, probably China and North Korea, are feverishly working to catch up. Early snow covered Beijing last November. According to the Chinese state media, it was the result of Chinese metereologists’ efforts to “make rain by injecting special chemicals into clouds,” a technique that often gets results (Agence France-Presse, 1 November 2009).
According to Chossudovsky, weather-modification technology is being perfected in the US under the High-frequency Active Aural Research Program (HAARP), part of the (“Star Wars”) Strategic Defence Initiative (SDI). Recent scientific evidence suggests that HAARP is fully operational. That it has the ability of potentially triggering floods, droughts, hurricanes and earthquakes. That it is?from the military standpoint?a weapon of mass destruction…
(more, next week)
First Published in New Age on 1st February 2010

One thought on “`Owning' the weather? Part I”