He was the quiet one amongst us. The shadow that accentuated the highlight. In an organization known for its creativity and exuberance, Mujibor was the unsung worker. He swept the floor, lugged things around and was the one everyone called upon when things got bad. Looking for a picture of him, I realized he wasn?t even listed in the Drik Family Profile section. He never got mentioned in the acknowledgements, except for a general thank you to ?all the others who helped?. I could find no photograph of Mujibor, except for the one I took when he died. 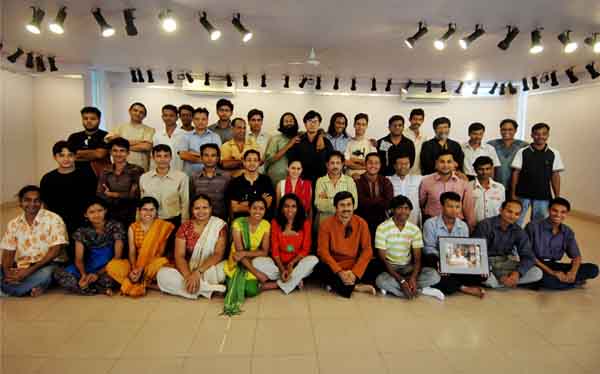 Two of the photographs we eventually found. An old file photo of the Drik family. Mujibor is standing on the extreme right.

His is the typical story of the rural poor. With little education and no special skills, making a living had become difficult. His brother Moti, and cousin Delower who work at Pathshala and Drik, introduced him to us. A low paid job in the city was better than being out of work in the village. Drik also provided opportunities to learn. Mujibor needed to send money home, so sharing a mess with colleagues was the cheapest way to live. Skimping on food, another way to save more for the children?s education. Not a wise decision when one is in poor health, but Mujibor had little choice. The extra food allowance we provided was also sent home rather than spent on meals.
When he was diagnosed with TB, my sister Najma arranged for his treatment. But the treatment for poverty is more complex and needs long-term solutions. Over a third of TB cases in Bangladesh go undetected. Many of us who might be infected by TB face none of the consequences. A decent regular meal is often enough to keep the disease at bay. For many however, a decent regular meal is a tall order. With spiraling costs of food, and high house rents, sending money home, is often at the cost of one?s longevity. A trade off that many accept as given. Mujibor was 40ish. Not many people in Bangladesh know their exact age. Few have birth certificates. His life was unexceptional, his pay was unexceptional, his death was unexceptional. Once one accepts the reality of poverty. It is that acceptance, that the have-nots have to accept such lives and such deaths, that is exceptional.
Mujibor?s salary was considerably more than the minimum wage stipulated by the government. Yet he struggled to support his three children and wife, all of whom lived in the village, where costs were lower. He lived alone in the city.
I remember a migrant worker in Paris telling me. ?I live and work here, and send money home. Perhaps my sister will get married, perhaps we might even buy a plot of land, but the best years of my life are spent in loneliness and misery. Who will give me back my youth??
The inequalities between and within nations are propped up by systems which worship profit above all else. The buyers squeeze the sellers squeeze the suppliers choke the workers. A much more famous Mujibor*** had spoken of a golden Bengal (Bangladesh). That Mujibor?s followers will need to do more than name monuments after him and pursue insane acts of vengeance, for the gold to reach this Mujibor?s children.
Muhammad Al Bouazizi, a 26 year old fruit seller, set himself alight in Tunisia in protest. Mujibor?s protest was more muted. He suddenly fell ill and was bleeding from his mouth and rectum. He was immediately taken to hospital. We all rushed to his side. The doctor recognised me. He said he would take special care. He suspected lung cancer and that little time was left. We were devastated. He was transferred to Intensive Care. The family was called in from the village.
As I stroked his forehead as he lay with tubes stuck to him, I saw the taut muscular body, the kind all workers have. Like Sultan?s** paintings. He wanted water, but the nurses said it was dangerous. I was only able to convince them to wet his lips. He was parched and wanted more. We said goodbye. I used words, he spoke with his eyes.
It had been just over 36 hours when, a bit after midnight, the doctor talked of putting him on life support. We hadn?t told Mujibor, but the man knew he was dying. His gentle smile had long gone. When his brother arrived at around 1:30 in the morning, he simply said ?I?m leaving. Look after the children.? At 03:10 he had.
Mujibor and Bouzazi both died of a disease called poverty. Will the rage in Middle East and African nations spread to the rest of the world? They will say we are different, we have regular elections and a democratic system. Mujibor?s wife and children and millions of inhabitants of Golden Bengal might disagree.
*?ekti mujoborer theke lokkho mujiborer kontho? famous song sung during the liberation war, ?from the voice of one Mujib will rise a thousand other Mujib?s voices?
** S M Sultan, Bangladeshi painter known for the muscular men and women he depicted in his paintings of rural Bangladsh.
***Sheikh Mujibur Rahman (popularly known as Bongobondhu, friend of Bengal), who is acknowledged as the founder of the nation.