An Installation by Shahidul Alam on Extra Judicial Killings

The Rapid Action Battalion (RAB) was set up on 26th March 2004 to curb corruption in Bangladesh. It consists of members of Bangladesh Police, Bangladesh Army, Bangladesh Navy and Bangladesh Air Force. RAB has increasingly been criticized for the extra judicial killings and torture that have taken place of people in custody. Human Rights groups maintain that over 1000 people have been killed by RAB since its inception. All such deaths have been attributed to gunfights between RAB and criminals where the people in RAB custody were caught in crossfire. No member of RAB has yet been killed in crossfire. Recently a high court bench passed a suo moto ruling, asking the secretary of the ministry of home affairs and RAB to explain a particular killing. The Chief Justice dissolved the bench immediately before the date for hearing (9 January 2010) of the government response – apparently for some administrative reasons. ‘Crossfire’ is an exhibition of photographs where Bangladesh’s leading photographer Shahidul Alam, takes an allegorical look at the phenomenon. The constructed images use elements of real case studies to evoke stories that the government has denied.
List of Extra Judicial Killings-March-2010
——
A small time mugger caught red-handed.  It didn’t seem a big deal. As the police dragged away the young man, he implored that they not inform his family “they don’t know I do this”. He seemed more concerned about his reputation than what the police might do to him. It was when the people in the streets began suggesting that maybe he should be ‘crossfired’ that the terror crept into his eyes. It wasn’t the Rapid Action Battalion (RAB) he had been arrested by, and it was a police station he was being taken to. He had probably assumed that some high up would call the local police station, or that he would pay some bribes, and he’d be out again, soon. If the police cooperated, maybe his family wouldn’t know. But crossfire was something else. He begged and he beseeched, but fear had gripped him. He knew it took very little for things to take a turn.

Crossfire. The word has crept into our vocabulary. The identical press releases with only names and locations changed. The mug shots from the photo ops. Frantic family members trying to prevent the inevitable. The corpse at the morgue. The government started calling the dead shontrashis, a word that has different connotations in Bangladesh, from the ‘terrorists’ that the US define. I had been angered when journalist John Pilger, whom I’ve admired, described the initiator of RAB, Moudud Ahmed as a  ‘decent, brave man’.
The law-maker was cultivating a disregard for justice. “Although technically you may call it extrajudicial-I will not say killing-but extrajudicial deaths. But these are not killings, whatever you call it-people are happy.” 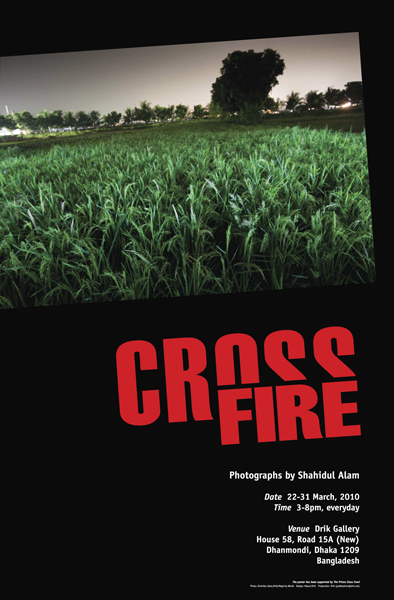 The law minister was using the presence of a corrupt police and a corruptible judiciary, to justify a vigilante force that he could control.
I wondered whose idea it was. Black outfit, sunglasses, black bandana. An executioner’s uniform. I remembered the constitution of my land.

‘To enjoy the protection of the law, and to be treated in accordance with law, and only in accordance with law’. Article 31.
‘No person shall be deprived of life or personal liberty save in accordance with law.’ Article 32.
This was what the law minister wanted to do away with. At least he had acknowledged its existence. The ‘crossfire period’ that Human Rights Watch described as being ‘Martial Law in Disguise’ included two years of a military installed caretaker regime. As democracy returned, the 2008 election pledge struck a chord. To “stop extrajudicial killing, bring the perpetrators to justice, and establish rule of law and human rights” was part of a campaign promise that led to a landslide victory.

The new foreign minister promised ‘zero tolerance’ to death in custody. The killings continued, but this time it was denied. “There is no crossfire in the country. It has never happened” emphatically claimed the home minister. The slumbering judiciary woke up and the bench passed a suo moto ruling, asking the secretary of the ministry of home affairs and RAB to explain a particular killing. Earlier in the incident, the family members had implored that their relatives not be ‘crossfired’. It hadn’t helped. The court expressed concern that ‘extra judicial killings’ continued even after the ruling. The bench was dissolved by the Chief Justice immediately before the date for hearing (9 January 2010) of the government response – apparently for some administrative reasons.

So how does a photographer respond? Exposing the facts, presenting one’s arguments well, making sure the information reaches a wide audience, is the best any journalist can do. What is left, when the killings continue? The facts behind ‘crossfire’ are known. Despite the reluctance of many human rights activists and otherwise-active members of civil society to challenge this injustice, people themselves and now even the judiciary have protested. Now that this apparently ‘independent’ judiciary has also been muffled, what is left?

The intention of this exhibit, was therefore not to present documentary evidence. There was plenty of that around and it had failed. The show attempts to reach out at an emotional level. I aim to get under the skin. To walk those cold streets. To hear the cries, see terror in the eyes. To sit quietly with the family besides a cold corpse. But every photograph is based on in-depth research. On actual case studies. On verifiable facts.  A fragment of the story has been used to suggest the whole. A quiet metaphor for the screaming truth.

Working with the Peruvian curator Jorge Villacorte and the research team of Momena Jalil, Tanzim Wahab and Fariha Karim, we have tried to create a physical experience that aims to evoke rather than inform. The Google map acts as an interface with the public whereby people can add information based upon their personal experiences, and is an organic repository for local knowledge that rarely gets to surface in the conventional information flow. It is an attempt to continue living as human beings.
In the words of a Supreme Court Judge, “It will be suicidal for the nation and the society to allow the law enforcement agencies to decide who should be killed on criminal charges.”
—————————–
The exhibition and Drik’s Media Academy was opened through a joint programme on the 22nd March 2010 by the legendary Indian writer and activist Mahasweta Devi