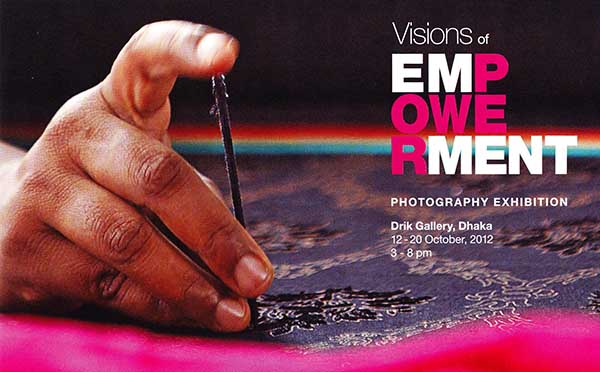 Dear friend,
The story of BRAC has been told and retold in countless ways ever? since it started? out as?a small relief operation in the aftermath of Bangladesh’s bloody War of Liberation.
In this,?at ?its 40th year and at the peak of recognitions as the word’s largest non-governmental?organisation, BRAC has excavated through its archives to present ?its own version of the?story visually.
Through photographs collected across four decades, and spannng three continents,?”Visions of Empowerment” is on at the Drik Gallery from October 12-20.
As the world gets ready to observe the International Day for the Eradication of Poverty,?please come share this remarkable story.
Asif Saleh
Senior Director Strategy, Communications and Capacity
BRAC and BRAC lnternational
Venue
Drik Gallery
House 58 Road 15A (New)
Dhanmondi R/A, Dhaka 1209
Bangladesh
Time
Inauguration 4:30 pm
October 12. 2012