A bitter controversy arose from the distribution of the following photograph by Associated Press, of a dying US marine in Afghanistan. Shahidul Alam of Drik and other leading Asian journalists were interviewed by Lynette Corporal of Asia Media Forum. The interview in its original form is given below. 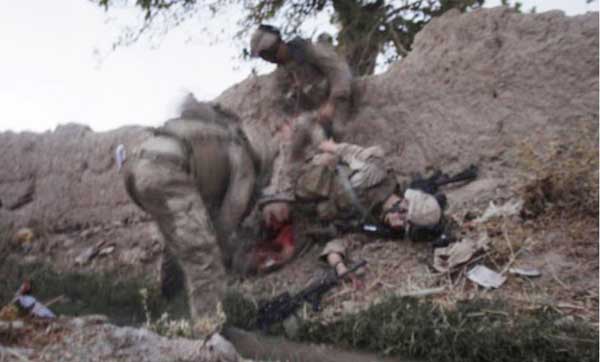 Lance Cpl. Joshua “Bernie” Bernard, 21, lying on the ground with severe leg injuries after being struck by a grenade in an ambush on Aug. 14, his fellow Marines tending to him. Bernard later died of his wounds. Afghanistan. Julie Jacobson/AP

LC: One of the oft-debated topics around is whether to publish or not images of death and suffering of people in conflict areas. As a photographer, what is the most important for you: to show the world the real score, the gritty reality of war or hunger or sickness or respect the privacy of individuals by refraining from showing such graphic photos. Or is there a way to do both?

You have been involved in such dilemmas before and were faced with painful choices, how did you resolve that?

SA: From an ethical perspective, the primary question is whether publishing a picture is in the public interest. The ‘public’ is not a monolithic unit and many things that may be considered to be of public interest will not be in the interest of some members of the public. In this case there are many interests to consider. The people at the receiving end of the war, the world at large, the weapons industry, the politicians, the US public, the soldiers and very importantly, the family of the deceased. The family clearly did find the publication of the picture distressing. I am sure the family found the death of their kin far more distressing. I am surprised that Mr. Gates who feels that AP should consider the feelings of the family when deciding to publish the picture (incidentally, AP did not publish the picture, but made it available for publication), was not himself, prepared to respect the feelings of the family when the war machinery he represents, decided to send the soldier to his death. It is precisely the ‘judgment and common decency’ of this war cabinet, that is being questioned here. When one considers the agony that the war continues to cause the many other stakeholders, then surely, reporting accurately on an issue of major importance cannot be shied away from. Hopefully, the publication of pictures like these will play a role in reducing the possibility of other families of other soldiers going through similar pain.

There is also the implication that the word ethics stands alone, unaffected by the political space it is surrounded by. Donald Rumsfeld’s concern after the Abu Ghraib photographs were revealed, were more about the distribution of these photographs than about the incidents they revealed. His concern being people ‘passing them off, against the law, to the media’. The recent distribution, on a much wider scale, of the far more disturbing image in the video of the dying woman in Tehran, led to no similar outcry of insensitive distribution, no concerted demand to take down the images from youtube. Rather there were tributes to the dying woman.

The offender in that instance was the much vilified ruling party in Iran, and hence it was the condemnation it brought, and not the ethics of the display, that was the news. There have been attempts to restrict the display of gory images of non-Americans too, as in Kenneth Jarecke’s image of the charred Iraqi soldier. 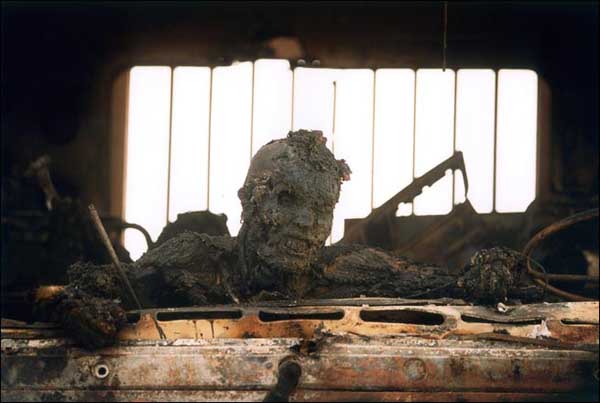 On that occasion, it was not the disrespect to the dead soldier that was the issue, but that the image damaged the spin of that time, that the ‘clinical’ attack avoided ‘collateral damage’. Images of the dying in Gaza, distributed by all who could get their hands on them, led to no concern of being insensitive. The nation that protested to Japan in 1938, about its bombing of China saying ‘The bombing of non-combatant populations violated international and humanitarian laws.’ seems to have few problems bombing civilians itself.

We are witnesses of our time, our job is to record accurately, and fairly. The value of a photograph is not static and changes with time and circumstances. To decide not to photograph is to exercise an editorial viewpoint that a person cannot possibly make under pressure, often facing personal harm, especially when the failure to take that photograph might result in that moment being lost to humanity forever. The witness is not the judge, and there will be many judges in many different courts, for many years to come. What one has to remember is to be respectful of the people being represented. This gives rise to another issue. The degree of respect seems to vary depending upon who is being represented. I repeatedly see gory images of majority world peoples being plastered all over magazine and newspaper pages, especially when it is a case of ‘what they do to each other’. The depiction of our savagery is common fodder for world media. Savagery is to be scorned regardless of who the savage is. It is in times like these I am reminded that some lives are more equal than others.

When faced with difficult choices, there are no easy answers. No textbook of ethics can make your decisions for you. I use the only mechanism I know, by asking myself if I would have been comfortable being subjected to the same treatment. It is a technique I use not only as a photographer, but in life itself. I must however admit, sometimes I take the picture even when I am not sure of the answer, if I feel it is a picture I must record for posterity.

SA: Sadly, majority world journalists and photojournalists, have not generally, demonstrated high ethical standards in their reporting. This is partly due to poor training. Few media organizations, even highly profitable ones, invest in developing the skills of their personnel. In photojournalism it is also attributable to photography being treated with disdain, where the hierarchy of a newsroom places the news editor (who often has little knowledge of photography) at the top and the photographer at the bottom. As such, the photographer rarely has a say in how her photographs are used. For many, this leads to a lack of self-respect. A photographer who does not take pride in her profession is unlikely to subject herself to high standards of any kind. Journalistic rigour, technical, aesthetic and ethical, has to be inculcated at all levels of reporting. In the case of photojournalists the general practice of photographs not being credited also plays a role. When a photographer does not have to take ultimate responsibility for her work, identified through her credit line, she is far less likely to be concerned about her credibility.

Responsible reporting requires time, persistence and sensitivity. While speed is king and bottom lines rule, accountants see this in terms of increased costs as opposed to better reporting. This will only change when there is a major culture shift from higher profitability to better reporting. Profit and better reporting are not mutually exclusive terms and better reporting would often, in the long run, lead to greater profitability. It would certainly lead to greater impact. Sadly, few newsrooms take this long-term view. In the end the reader has to play her role by going for publications that have high journalistic standards. Only then will the newsroom respond.
LC: From the Asian media’s perspective, would you as a photojournalist do the same as what the people at AP did — publish the photo in the interest of truth, no matter how painful it may be?

SA: Every time. I would print it well, with full credit and engage in the ensuing debate. (see point above about AP not publishing the picture but making it available for publication).

3 thoughts on “To Print Or Not To Print”