‘Journalism Is Under Threat.’ Inside a Bangladeshi Journalist’s Dangerous Journey From Photographer to Prisoner

It was only by chance that Shahidul Alam began taking photographs. A chemistry doctoral student in London, Alam purchased a Nikon FM for a friend while traveling in the United States and Canada in 1980. The friend couldn’t reimburse him, so he kept the camera.

“I started using it,” Alam, 63, tells TIME in Dhaka. “It was when I recognized, working as a social activist, how powerful images were, that I decided I’d become a photographer.”

Now, he has become a one-man vanguard in the fight for civil rights in his native Bangladesh, from early days capturing protests against former Bangladeshi despot General Hussain Muhammad Ershad to his more recent work documenting student demonstrations in Dhaka earlier this year — work that saw him become a prisoner of conscience after he was beaten, and detained by state authorities.

Alam’s career has always been about more than releasing a shutter and taking a photo. In 1989, he co-founded the Drik Picture Library with his longtime partner, the anthropologist and writer Rahnuma Ahmed, to recruit and represent Bangladeshi photojournalists as a popular uprising swelled to remove Ershad from power the following year. “We were entering a battle,” he says. “A battle for social justice. And if that’s what we needed to do, we needed warriors.”

The institute has since become a regional hub for free speech advocacy, and Alam built on its success. In 1998, he founded the Pathshala South Asian Media Institute, a fully-fledged photo academy, and Chobi Mela, Asia’s first international photography festival, in 2000. He became the first person of color to chair the World Press Photo jury, in 2003, and has received numerous accolades, including the Shilpakala Padak, Bangladesh’s highest artistic award.

Alam’s own photos portray the intimate in the political — a woman casting a vote in Bangladesh’s first elections in 1991, or rhythms of life among remote indigenous communities. His long-running series “Migrant Soul” documents laborers from sugar plantations in India to Malaysia’s Petronas Towers to the U.K, while last year’s “Embracing the Other” tackled Islamophobia and extremism, and was exhibited inside Dhaka’s Bait Ur Rouf mosque.

He also fought to challenge stereotypes. Most celebrated photojournalists are white Westerners, he says, accustomed to presenting countries like Bangladesh through the lens of scarcity and suffering. In 2007, he set up a photo agency covering what is often called the “third” or “developing” world, or the “Global South.” Alam prefers the term “Majority World.” Another initiative, “Out of Focus,” teaches photography to disadvantaged children.

In 2010, he showed a haunting conceptual series on extrajudicial killings by Bangladesh’s Rapid Action Battalion (RAB). The deaths were often blamed on “crossfire,” a euphemism that lent the exhibition’s title. Police attempts to shut it down sparked protests.

Alam live-streamed the uproar on Facebook, and on Aug. 5, he told Al Jazeera that police had stood by while armed gangs attacked students. Hours later, over a dozen plainclothes police burst into Alam’s apartment and placed him under arrest. Alam alleges he was beaten; when he appeared barefoot in court, he was unable to walk unassisted. He was detained for a total of 107 days.

The incident triggered outrage around the world. Public figures like Noam Chomsky and Arundhati Roy picked up the “Free Shahidul Alam” campaign. U.N. officials and the European Parliament demanded his release.

In October, while still in detention, Alam received the 2018 Lucie Humanitarian Award. He credits the outpouring of support with securing his release on Nov. 20, and saving his life — and says his case was representative of a dispiriting global trend. Last week, Cuban performance artist Tania Bruguera — who organized a guerrilla showcase of Alam’s “Crossfire” at London’s Tate Modern while he was in detention — was arrested over her opposition to a “dystopian” new art censorship edict.

“The world over, journalism is under threat,” he says. “Whether you’re a teacher, a dancer, a painter, or a journalist, each one of us needs to be constantly fighting.”

But tensions are brewing ahead of Bangladesh’s Dec. 30 election, which could see Prime Minister Sheikh Hasina win a third consecutive term (her last victory, in 2014, came unopposed after the opposition boycotted the poll). In Dhaka, opposition-aligned journalists have been assaulted and arrested in recent months.

Alam still faces up to 14 years in prison for publishing propaganda against the government under Bangladesh’s Information and Communication Technology Act (ICT), a “draconian” measure that has been used over 1,200 times to muzzle dissent, according to Amnesty International.

The veteran photojournalist is undaunted. When Bangladeshis vote this month, he’ll be back in the streets, shooting and live-streaming. “I’m a journalist,” he says, “You do what you do.” 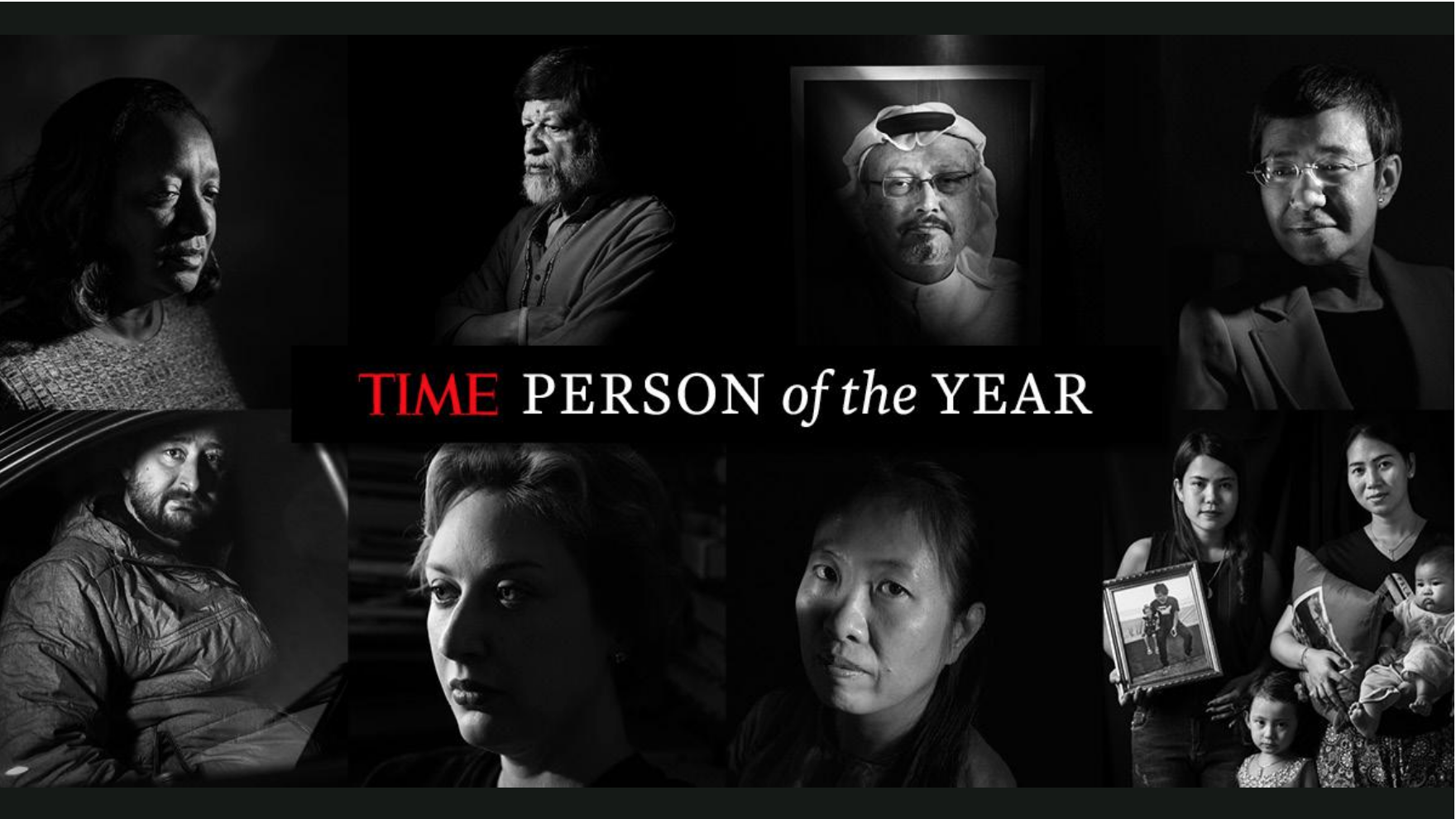 This story is part of TIME’s Person of the Year 2018 issue. Discover more stories here.