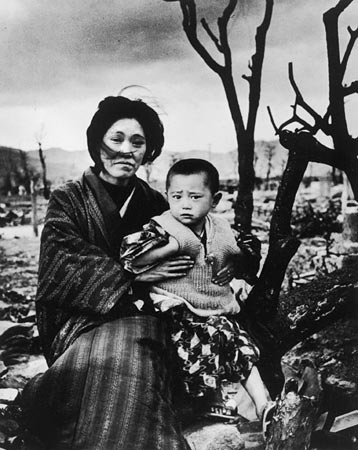 The public did not see any of the newsreel footage for twenty-five years, and the shocking US military film?remained hidden for nearly four decades. While the suppression of nuclear truths stretched over decades, Hiroshima sank into ?a kind of hole in human history,? as the writer Mary McCarthy observed. The United States engaged in a costly and dangerous arms race.?Thousands of nuclear warheads remain in the world, often under loose control; the United States retains its ?first-strike? nuclear policy; and much of the world is partly or largely dependent on nuclear power plants, which pose their own hazards.
Our nuclear entrapment continues to this day?you might call it ?From Hiroshima to Fukushima.?
The color US military footage would remain hidden until the early 1980s, and has never been fully aired. It rests today at the National Archives in College Park, Maryland, in the form of 90,000 feet of raw footage labeled #342 USAF. When that footage finally emerged, I spoke with and corresponded with the man at the center of this drama: Lt. Col. (Ret.) Daniel A. McGovern, who directed the US military film-makers in 1946, managed the Japanese footage, and then kept watch on all of the top-secret material for decades. I also interviewed one of his key assistants, Herbert Sussan, and some of the Japanese survivors they filmed.