The ambulance is more Muslim than you 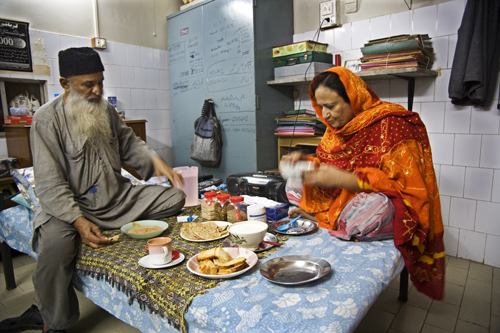 Abdul Sattar Edhi and his wife Bilquis having breakfast in their home in Karachi. Their bedroom that doubles as their dining room. ? Shahidul Alam/Drik/Majority World

‘The ambulance is more Muslim than you’.?That was the answer Abdul Sattar Edhi gave to a question when once asked ‘why must you pick up Christians and Hindus in your ambulance?’ By any stretch of imagination, Abdul Sattar Edhi is an enigma to most people. None of us truly understand him. I often think that Edhi walks a fine line between passion and lunacy. I am not able to comprehend why this man insists on doing what he does, in the capacity that he does it, for as long as he has done it for. The heart wants to register it, but the mind questions the motive.

Motive. What the hell is his motive? Please, someone tell me what this man?s motive is.
Through no easy deduction, I submit that I have discovered the answer to my question. It has taken every critical bone in my body to genuinely understand the answer, but folks, I can safely say that I have finally reached a verdict: there is no motive. There is. No. Motive. Edhi has destroyed my carefully built assessment of Man over the years. He has ruined my calculated analysis of the weaknesses of people. That he has negated all my years of hard earned views on Man single handedly almost leaves me infuriated with him. He has forced me to start over from scratch. For that, I cannot forgive him. 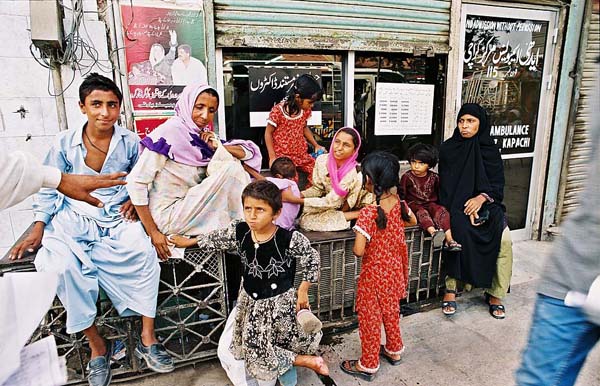 This is a man that I cannot imagine my own life without. Mind you, I have never met him. I don’t want to. There isn’t a single day in my life that has collectively added up in honor to justify me being able to sit opposite Edhi. I have at best, been able to find the courage to go and drop off some extremely basic things at one of his many, many, charity centers the world over. While there, I stay for just long enough to try to fathom what all this man has done for my country. Being an impossible task, I soon give up trying to reach to the bottom of that barrel and leave very quietly. I imagine it is pretty much what anyone what do.
For those unaware of who this man is, let me put it in a very simple way: Hollywood has Batman, Superman, The Hulk, and Spiderman. Pakistan has Edhi. 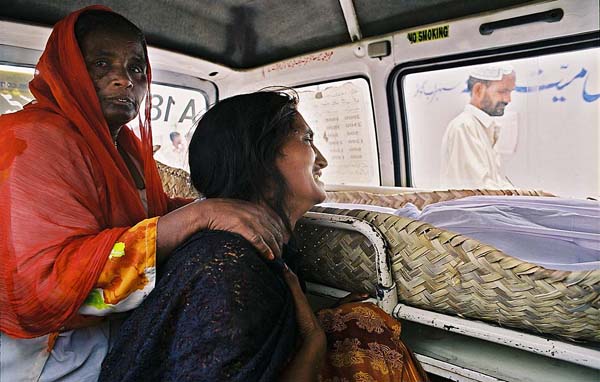 A mother grieves for her son in an Edhi ambulance.

What has inspired me to write about Edhi? He certainly doesn’t need any more press validating his incredible efforts or work done. He already has, safely locked away, the hearts of some 170 million people. But yesterday, I was brought to my knees by an action I witnessed that for lack of any other descriptive word, I can only describe as ‘Edhi’.
I was in a market in Karachi buying some movies. As I turned to leave for my car, I was fully ready and in anticipation of the small army of beggars I would confront before actually reaching my car. The well trained and relatively well meaning average person already has a few small notes ready in pocket to quickly disperse so as to satisfy some of the beggars, yet be quick enough to plot for a speedy getaway. I too was ready. 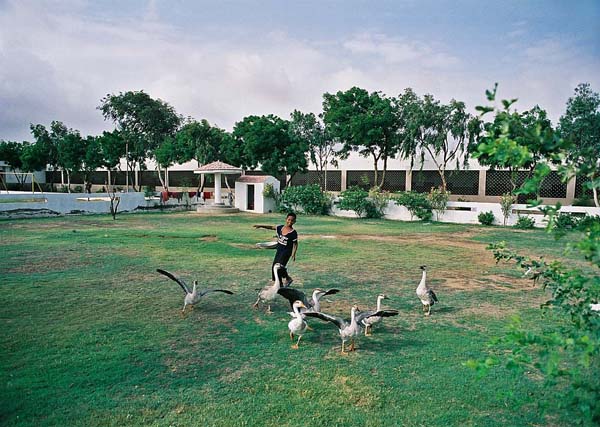 A boy playing with geese in Edhi village, near the main highway from Karachi to Multan.

As I made my way, a few kids and some adults quickly made their way towards me. I took out three 20 rupee bills and handed them to the three that looked most dressed for the part. 60 rupees and a satisfied conscience later, I reached my car, and quickly got into it. Of course, I still had to wait for a friend who was still in the store. While waiting, a young man no older than 18 years came to my window. He spoke through the raised window with just a loud enough voice that I could make out what he was saying. It started off relatively standard. He told me that he isn’t a beggar, but that he is genuinely very hungry and hasn’t eaten anything all day. He went on to say that he does get daily wages for work he does on a construction site, and that today had just been a bad day for him of no work, and hence no money. He was good. Very good. I was sold. In fact, I was more then sold. I was suddenly very sad. I concluded that I had to help him however I could. The irony is, I am the farthest thing from being a ?good? man. This is no reverse psychology. I am truly, incredibly average. I went into my pocket, however, to take out some change, and the only thing I had left was a 500 rupee note. By anyone’s measure, that is a lot of money to give to any beggar. As I mentioned, I?m not a noble man, and I don’t pretend to make a habit of it. I guess he was just good enough at the moment, and I was weak enough at the moment to give the whole 500 to him. His eyes practically popped out of his sockets when he saw the note, and in excitement, he accepted it and showered the usual blessings on me. He went away to the little hotel right next to where we were. I could see him get a bun kebab sandwich and a drink that must have together cost about 85 rupees. 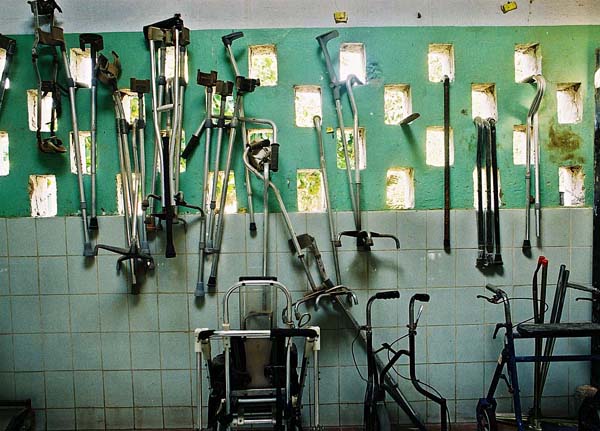 Crutches on the wall in the ward for mental patients in Edhi Village.

While I was waiting for my friend, I saw him walk to the next store, where outside there was a collection stand for Edhi. You have already anticipated what I’m going to say. That young hungry man put the remaining money he had into Edhi’s drop box for the Flood Relief fund. I couldn’t believe what I saw. I quickly got out of the car, and called the young man over to me.
I asked him why he just did what he did. I also told him that I had given him that money because he himself was poor and he didn’t need to do that. He told me, burger and drink in hand, that his countrymen were under water, and that the only man that could help them was Edhi. He said his hunger was now satisfied, and that he was confident of having paid work the next day, and so he was ok. He went on to say that he was a dumb and helpless person, who couldn’t help anyone even if he knew how, but that Edhi would find a way. He smiled at me, chomped on his burger, and walked away.
I was destroyed. I can’t remember the last time I felt the way I did. I just sat back in my car.
My friend came back, got in the car, looked at me, put on some music, and we drove away. I didn’t mention what I just saw. It was pointless. It was just the moment in itself and it didn’t need rewinding. 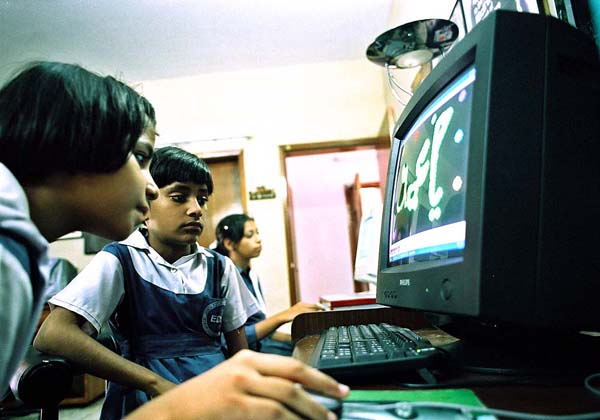 Multimedia classes for girls in school set up by Bilquis Edhi in Karachi.

As I left the market, I couldn’t get Edhi out of my mind. What level of reliable kindness does it take for an incredibly poor and hungry soul to give away his lion?s share of money and put it into the care of a man he’s never met? More importantly, how powerful a name does one have to have, in a country where names are easily trampled on, that an unprotected drop box miles away from Edhi himself satisfied this young man’s trust enough to blindly drop that money into it. Such is the power of this thin, fragile, 80 year old man who lives with his equally kind hearted wife in one tiny room of one of his charity centers. With a body that can hardly move a small table, this man has moved an entire nation. I would thank Edhi for all that he has done if thanking him was enough. I would recommend the Noble prize for Edhi if that could sum it up. I would do this if I could. I would do that if I could. In truth however, none of it would matter to him. None whatsoever. And that is what makes him so great. So, so, great. 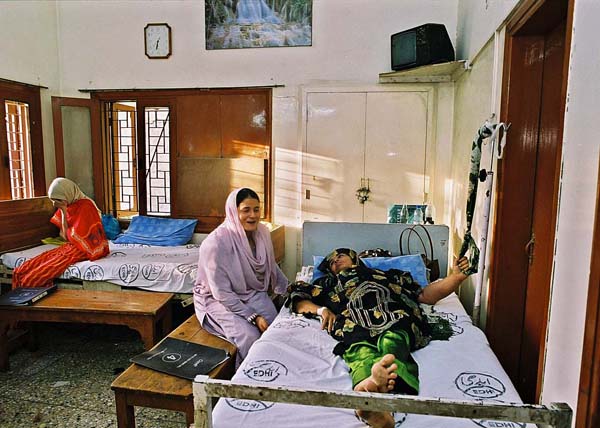 Patients at the cancer ward set up by Edhi in Karachi.

———-
Related links:
Pakistan: Hope amidst the chaos
The Game of Death

3 thoughts on “The ambulance is more Muslim than you”