Left: Still photo from a video of the May 15 protest at Children’s Place. Right: Photo from @snufftastic Twitter account.Rumors have flown for many years that DC police routinely infiltrate and spy on the frequent protests in the nation?s Capitol. But until now, activists have never been able to identify a specific undercover cop at a protest. Now, after months of piecing together evidence, attorneys Jeffrey Light and Sean Canavan working with?United Students Against Sweatshop?(USAS) have confirmed that under an assumed name, Metro police officer Nicole Rizzi has participated in USAS protests against companies doing business in Bangladesh who refuse to sign the?Accord on Fire and Building Safety in Bangladesh?following the death of as many as 1,129 workers in the?Rana Plaza factory collapse. END_OF_DOCUMENT_TOKEN_TO_BE_REPLACED 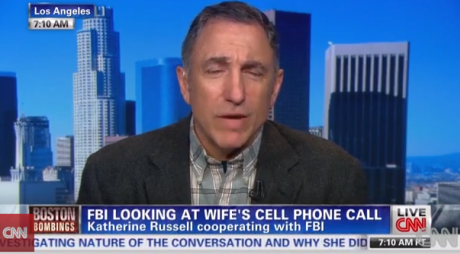 Former FBI counterterrorism agent Tim Clemente, on CNN, discussing government’s surveillance capabilities Photograph: CNN screegrab
The real capabilities and behavior of the US?surveillance?state are almost entirely unknown to the American public because, like most things of significance done by the US government, it operates behind an impenetrable wall of secrecy. But a seemingly spontaneous admission this week by a former FBI counterterrorism agent provides a rather startling acknowledgment of just how vast and invasive these surveillance activities are. END_OF_DOCUMENT_TOKEN_TO_BE_REPLACED A desperate damage control operation is underway as further allegations emerge about the extent of the illegal phone hacking at the Rupert Murdoch-owned?News of the World. The paper?s royal editor and a private investigator were found guilty of hacking into the voice mail of members of the Royal family and their aides in 2007.
It is now alleged that the practice was much more prevalent than was revealed at the time and that the Metropolitan Police failed to investigate all the cases known to them.
Journalist Clive Goodman and private investigator Glenn Mulcaire were found guilty at the Old Bailey in January 2007 after they admitted hacking into phones. Goodman was jailed for four months and Mulcaire for six months.News of the World editor Andy Coulson resigned following the case. He denied knowing about the hacking, but he accepted ultimate responsibility as editor of the paper. Prime Minister Gordon Brown immediately phoned to offer his commiserations. He assured the journalist that he had acted honourably in resigning and expressed his confidence that Coulson would soon have another job.
Coulson is now Prime Minister David Cameron?s director of communications and at the centre of the new allegations. His presence in the new Conservative/Liberal Democrat coalition administration implicates all three major political parties in the affair. It is now suggested that under the previous Labour government, the police and parliamentary investigations were cut short. The Liberal Democrats, who challenged Coulson?s claims that he was ignorant of the phone hacking, are now part of an administration in which Coulson plays a key role and must, as deputy Prime Minister Nick Clegg did in the House of Commons earlier this month, defend him.
A network of relationships has been exposed which reveal the incestuous nature of the British political elite and its ties to global corporate interests, in particular to Rupert Murdoch?s News International Corporation. A coalition government has just come to power that supposedly represents a new chapter in British political life after 13 years of Labour rule. But the Murdoch empire has slipped seamlessly from one government to the next. Even if Coulson is never charged with any crime and never found guilty of any crime, this affair will have demonstrated beyond a shadow of doubt that official politics in Britain is entirely divorced from the interests of ordinary people and in the hands of a criminal oligarchy who act outside the law.
Real political power lies with this plutocratic layer and not with elected representatives in Parliament. Allegations have emerged this month that the House of Commons Culture, Media and Sport Committee held back from pursuing its investigation into phone hacking at the?News of the World. Adam Price, a former Plaid Cymru MP who retired from Parliament in May, claims that MPs were afraid that their private lives would come under investigation if they called on News International Chief Executive Rebekah Brooks to testify. Members of the committee discussed getting the sergeant-at-arms to issue a subpoena for Mrs. Brooks.
END_OF_DOCUMENT_TOKEN_TO_BE_REPLACED